March 12, 2013
As if the first morning of the festival isn't tense enough without little added dramas.

Clerk Claisse decided that a -11 degree windchill overnight was enough reason to call a track inspection. Probably fair enough. But it did nothing for the nerves and pent up energy of those around me on the train. "You wha? A birra frost and they wanna cancel the races? Fookin' jokers". This was Wayne on the 10.29 from Birmingham New Street. He wasn't eating weatos though. He was necking Magners Premium.

The other added drama was Nev. Nev had an Oyster card problem, his local machine in Charlton refused to accept notes. Then he had a Bakerloo line problem. He missed the train from Paddington for the planned rendezvous with Col by a fistful of minutes. Instead he was required to take the scenic trip via Bristol and looked like missing the Supreme. "I'll have to do the pisspot from my moby" was his text code for not being at thetrack in tme to get his placepot down in person.

Both these situations were amicably resolved when the track passed the inspection with the proviso that the first race was delayed until 2.05. And this enabled Nev to arrive in time for the Supreme.

Train journeys to the Festival are always enlightening experiences. Two blokes behind me were reminiscing about Cheltenham's past.

"Last year was bonkers, Whitey. Jimmy Devine and Beano going off with them hookers after racing."

"Don't see the point. I'd rather have a cheeseburger. Or a fight."

"Yeah. Someone told me this Granduetto should be all right in the 3.20."

Grandouet wasn't alright. He fell when travelling well and Hurricane Fly reclaimed his Champion Hurdle crown from 2011. Zarkandar was my best bet going on to today, but was critically outpaced turning for home and beaten two out.

At least Zarkandar got competitive. That is more than can be said for all my other runners, none of whom ran to any known form or were found to be wading out of their depth.

Adjectives for the scouring wind sweeping the track all day could easily be applied to my punting experience: battering unrelenting and, er, cold.

But at least the jerk burgers warmed us up and the company was top notch.

Col was talking to a 75 year old lady before the last who had been to loads of Festivals and was clutching an envelope from her son stuffed with wedge to put on Une Artiste. Great stuff. Something to aspire to in my mature years.

Back to Bristol then, to lick my wounds - though Col and Nev had emerged unscathed - in a very pleasant pizzeria near our berth and a decent pint in a properly unreconstructed local boozer. The King's Head. We can recommend.

And so, loins girded up so high my pips are squeaking. I offer - for information only - my selections for Champion Chase day: 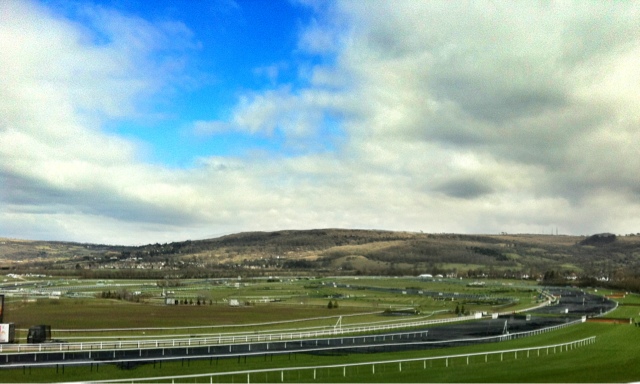