Every season around this time, I free-wheel out of the Cheltenham Festival mayhem like Lance Armstrong down the Alpe D'Huez, before gently coming to rest in a flat spot wider than the Nevada Salt Lakes. Becalmed in the doldrums in between the festival, Aintree and the start of the flat season proper. No mans land.

This usually means it's time to over-analyse my festival punting.


Surprisingly, the first batch of Cheltenham ante-posts published here in January stood up reasonably well. This is not always the case. Not that they got off to a flyer on the first day. Silverburn

never made it to the Arkle, so that long shot hope was dead long before the tapes went up: but maybe I can take crumb of a moral victory from the fact that he ran in the SunAlliance chase over a mile further AND PATENTLY DID NOT STAY! Ergo, he should have turned up in the Arkle! Marodima, from the same Paul Nicholls stable did turn up, though one would have been hard pushed to notice. He ran very freely in the early stages and went out like a light. Amaretto Rose was retired to brood mare duties before the festival after a single very below par run in the Kingwell Hurdle at Wincanton behind eventual Champion Hurdler Katchit. This bet proved to be a second-guess too far.

The bets for Wednesday showed a little more promise. Trafford Lad was a game third in the renamed SunAlliance Hurdle (now the Ballymore), but backing Lead On for the Sun Alliance Chase proved to be a mistake. I had him down as a three-miler, and his trainer Philip Hobbs begged to differ! He was campaigned over 2 1/2 miles and never really had this race on his agenda. As it happened he jumped pretty poorly in the Scilly Isles novice chase, a recognised festival trial, and would have struggled to make his mark. 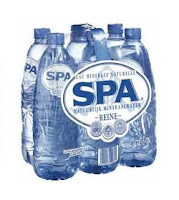 So where are those ante-post successes? Nothing on Thursday. Friday was pay day though. Nenuphar Collonges proved to be my best bet of the festival, particularly as I topped up at the still-attractive prices a couple of days before the race. After Black Jack Ketchum and Wichita Lineman in previous years, the Spa Hurdle is fast becoming my most successfully punted race at the Festival.


Subsequent ante-posts had a distinctly mixed flavour. I seemed to do much better on place bets this year than in other years. Snap Tie broke my duck in the Supreme when he stayed on for 3rd, but this is the festival curtain-raiser and I'm desperate to win it and not to be bleedin' bridesmaid. I also got place returns on Junior (Coral Cup - well pleased with that) and Kazal (World Hurdle); but shocking ante-posts on Special Envoy (flattered to deceive in the Autumn), Harchibald (primadonna), Ring The Boss (inexperienced), Twist Magic (hates the track) and Kicking King (sentimental bet) crashed and burned big time. 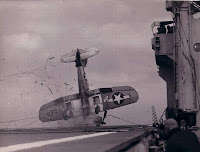 This pegged pegged me back to a modest overall profit for the festival, taking into account day of race and other assorted bets (such as an outrageous Lucky 15 that would have grabbed shed loads had it come in and was worth the stake simply for the ridiculous grin that adorned my chops as I struck this ridiculous bet!). Ultimately, I'll settle for that.
Posted by Davoski at Wednesday, March 26, 2008 No comments:
Email ThisBlogThis!Share to TwitterShare to FacebookShare to Pinterest
Labels: ante-posts, Horses to Follow

Cheltenham 2008 - The return of the three dayer

The festival is always special: the highest quality racing in one of nature's great amphitheatres played out in front of a raucous crowd packing the stands to the rafters and gambling their every last penny. But the festival is a test of endurance too. In the days of the three day festival I would collapse in a heap on the train home after the County Hurdle wrapped up proceedings feeling knackered. I would be emotionally drained, physically shattered, mentally overwhelmed and usually finacially bankrupt. The full four day festival has always been one-day further than I have been prepared to go. I know my limits.


So this year provided an interesting return to the three-dayer. After a full day's helter skelter action at Prestbury Park cheering home a new Arkle hero in Tidal Bay and a new Champion Hurdler in Katchit, we awoke on Wednesday morning to find Champion Chase day had had been cancelled. Or at least postponed, dismembered and put back together in some crazy Frankenstein's monster of a race meeting. High winds had whipped up a good deal of frenzied action at the course early on Wednesday morning. Edward Gillespie, Cheltenham's Chief Executive had been on the Morning Line by 8.30am reporting danger everywhere: flying debris, collapsing roofs, and tented village mayhem. So the racing was off for the day, tickets would be refunded in full and all the day's races would be rescheduled for Thursday and Friday, grafted on to the rest of the festival programme. Bloody hell! That meant 10 races on Thursday and 9 on Friday.

John Randall, the Racing Post resident historian, archivist and anorak, texted the delicious Tanya on the Morning Line to say "The Gods have spoken! It is the return to the three day festival!".

I didn't have tickets for the Thursday yet. We had planned to pick them up at the track early on Wednesaday. Now I'm thinking, 'Oh no, everyone will want to be here the see history being made'. But I had nothing to fear. We were at the course in plenty of time to bag a ticket for the following day. But it was a tingly moment. I clasped the ticket in my sweaty hands and let out a little yelp of joy at the prospect of this monstrous card of Grade 1s, 2s and stunningly competitive handicaps from dawn till dusk the next day.

So there was time to poke about the racecourse for the morning. We wandered through the National Hunt Hall of Fame for an hour, soaking up some nostalgia (Dawn Run nicking the Gold Cup from Wayward Lad) and relivi 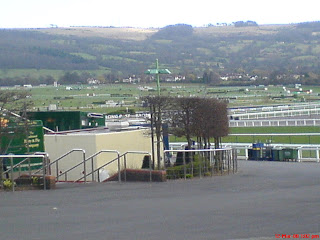 ng past glories (Michael Dickinson's 1-2-3-4-5 in the '80s). There was plenty of folk about doing the same as us, too. The Course was all dressed up with nowhere to go: the bars were open, the bookies were taking bets on Huntingdon and Southwell; there were enough yellow-bibbed security guards to demand the wearing of sunglasses; the Centaur conference suite was playing the Best Mate Story on a giant screen to a three-parts empty room of disinterested punters shuffling around aimlessly. The enclosures were off limits (back to the dangerous winds), but we snuck a peak through the gates near the Best Mate enclosure at a deserted concourse just before 2pm, the scheduled off-time for the Ballymore Hurdle. Surreal.

own centre was similarly ill at ease with itself: 40-odd thousand punters had to
go somewhere. Every pub was rammed. The bookies were overlflowing. I even struggled to get a cup of coffee in the back-street Starbuck's. At the station a fleet of double decker buses were parked neatly in line by the entrance waiting to shuttle hordes of eager racegoers that did not turn up.

Next morning, Edward Gillespie informed us on the Morning Line that everything was OK for racing. Early start though. First race was 12.30pm. It seemed to have an impact on the attendance, too. It was a distinctly thinner crowd than Tuesday, but the roar that accompanied the tapes going up for the first race was no less deafening than usual, though was it tinged with a little irony, or was that just my imagination?

The day didn't disappoint. Right from Old Benny's grinding win in the opening 4-miler, through to a thrilling finish when Cousin Vinny gave Willie Mullins yet another bumper success in a race completed in near darkness and through streaming drizzle. Master Minded delivered an absolutely remarkable performance in the Queen Mother. This, year after year, is my favourite race: seasoned chasers streaming over fences with pinpoint accuracy at high cruising speeds. Master Minded left the rest of the field for dead today. When jockey Ruby Walsh eased down his mount coming home, the horse was still pulling away from the game but outclassed Voy Por Ustedes in 2nd. Ruby's pixelated face, magnified ten-times on the big screen, betrayed astonishment. This was a breathtaking display. But for emotional intensity, what about Inglis Drever landing his third World Hurdle crown? A feat never achieved before. And how he had to work for it. On ground softer than ideal, hitting a longer flatspot than usual and boxed in between Kazal and My Way de Sozen, Inglis somehow raised his game, jinked out from the hole and outstayed Kasbah Bliss back up the hill. Not a dry eye in the house, I swear. Marvellous scenes.

And what else? A first, overdue, festival success for Sue Smith with the evergreen Mister McGoldrick who absolutely bolted in at 50-1; a first Grade 1 for Our Vic who donned blinkers for the first time at the ripe old age of 10; and a first festival winner - of many, no doubt - for Evan Williams with High Chimes.

Me? Nine losing races out of ten..... Kazal's 3rd in the World Hurdle saved me a complete blow out. But I was in serious debt after 16 races. So going home after only two of the three days still felt as draining as a full three festival. The prospect of settling down to watch the Friday extravaganza in a comfortable pub in front of a big screen was very welcoming.

It took me every one of the nine races on Friday to get myself back in profit. But I ended this bizarre meeting back in the black. The sight of Nenuphar Collonges plugging on up the hill to claim victory in the 3 mile novice hurdle when every other beast was treading water will stay with me for a very long time. That was the big winner I was searching for. A couple of tasty place bets helped me through too: Trafford Lad was game in the SunAlliance Hurdle, but he was behind an epic struggle between Venalmar and FiveFourThree, who were absolutely hammer and tongs over the last few furlongs, with the latter just prevailing under a driving Ruby Walsh ride. An exhilierating start to the day. The Coral Cup was alsmost as close. Ferdy Murphy's Naiad Du Misselot somehow got up to beat Kicks For Free on the line by the new distance of 'a nose'. Junior was third to land me some place wedge.

So by the time the Gold Cup came round I was quite relaxed. I could enjoy the spectacle. And I did. Watching Denman gallop Kauto into submission was awesome. The horse is simply relentless. A juggernaut. Maybe it wasn't quite the race some envisaged. There was no dramatic moment as Kauto Star cruised up to Denman's shoulder. No opportunity for the nation to hold its breath for six seconds and wonder what would come next. But it was no less impressive to these old eyes.

Bagging a 33-1 winner in the Foxhunters was just sheer spawn. I remembered Amicelli as a decent novice chaser for Philip Hobbs. So a few quid on him for that reason was enough. I don't think I even looked at the rest of the card. And up he trotted. Easy as you like.

Another marathion day of punting ended in a blur of London Pride and dodgy kebabs. That was about the only predictable part of this particular Cheltenham Festival when, with apologies to the Spice Girls, four became three.

Posted by Davoski at Friday, March 21, 2008 No comments:
Email ThisBlogThis!Share to TwitterShare to FacebookShare to Pinterest
Labels: At The Races
Newer Posts Older Posts Home
Subscribe to: Posts (Atom)