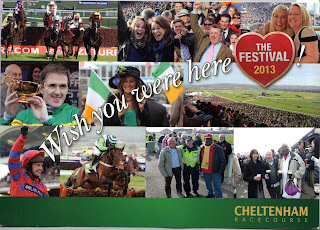 The murky Festival markets are beginning to settle. Running plans are a touch clearer, handicap weights are set and bookies are dusting down their annual Non-Runner-No-Bet offers. With the shackles shaking loose, I feel the urge for a broadside of scattergun punting. Must. Keep. My. Focus.

Time to preview the greatest show on earth.

Nothing further added to the two each-way singles on Melodic Rendezvous (14-1) and Dodging Bullets (14-1). Both have shortened up since those bets were struck and Melodic Rendezvous further enhanced his claims with a demolition job of previously unbeaten Puffin Billy at Exeter. However, My Tent Or Yours has changed the complexion of this market with his rout of a very strong Betfair Hurdle field at Newbury last month. That form is head and shoulders above anything else here. But with the exception of MTOY, these are all unexposed novices. I really like the look of MR and reason that he goes there with a very strong chance, having improved for every run and likely to do so again on better ground. Despite his exciting turn of foot over this trip, the trainer has not ruled out the Neptune and I would be gutted if he went there instead.

Dodging Bullets has translated solid efforts amongst last season’s juvenile crowd into encouraging form this season. I don’t think he’s been seen to best effect yet. On a couple of occasions DB has had to make his own running. Even his race behind Darlan in the Christmas Hurdle turned into a five furlong sprint. A strongly run Supreme will play to his stamina strengths and will see him bang in the mix.

Jezki looks the pick of the Irish challengers and add in Un Atout for a fascinating curtain raiser. This is the Festival, and if ever mug punts were permissible it is here. I will inevitably have My Tent Or Yours in a portfolio of crazy acca combinations with other novice hurdlers and other bankers.

This season’s renewal is following the pattern of last year when a flying grey from the Nicky Henderson stable frightened off most of the competition. Simonsig brings a reputation into the race only slightly less tall than Sprinter Sacre’s. There are at least two other rivals that have this race as their confirmed aim. However, whilst we can expect Overturn and Arvika Ligeonniere to be joined by others chasing a bit of prize money, this will not be a race with any great strength in depth.

That said, this has all the hallmarks of a great encounter. Overturn – rated higher than Simonsig over hurdles – will have Maguire on board cutting out the running and praying that he calls the fractions right to make the most of his mount’s strength and fighting abilities. Overturn is sure to make it a true test and exert some pressure on the jumping of Simonsig who comes here with less experience than his two principal rivals. The latter would appear to have all the bases covered, having won his two chases both from the front and tucked in behind, and with cast iron 2 ½ mile form in the locker. Lack of experience hasn’t been a barrier to previous Arkle winners. Although word has it that Yogi Breisner turned up this week at Seven Barrows to put Henderson’s charges through their paces. That’s enough to convince me Simonsig is not the Festival banker! Arvika Ligeonniere has the potential to be a rather large fly in the ointment. His style of running is also to cut out the pace and his wins this winter have been stamped by exuberant jumping that has taken lengths out of opponents. Arvika would be sensible bet for this race at the prices but for the nagging doubts about his tendency to jump right at some fences and that irritating soft, novicey fall last time out. This won’t be a big betting race for me and I’ll probably leave it until the day. I expect Simonsig to win, I’ll want to back Overturn, but I’ll probably have a couple of quid on Arvika. Mullins won’t have any need to resort to Breisner’s practices to iron out jumping issues.

The old National Hunt Handicap Chase over 3 miles, now sponsored by JLT Specialty, regularly throws up competitive renewals.  Even at this close range to the Festival, multiple entries and massive fields make sorting the wheat from the chaff a tricky proposition. As ever, there are conflicting clues amongst the race trends: outsiders can do well and yet nine of the last 12 runners were in the top four in the betting.  Previous festival form seems to be important and yet novices have won three of the last nine renewals. One set of stats do stand out though; top weights have a shocking win record and only one horse has carried more than 11 stone to victory since 1998.  That was Bensalem on 11-2 in 2011. No winner has been rated over 150 for 30 years.

Problema Tic at 28-1 NRNB looks to have the right profile. His style of racing off the pace will suit this race. The horse (like so many being readied for the Festival) is crying out for a piece of decent ground. David Pipe is clearly plotting up something after he was hunted round without ever threatening in a race at least half a mile too short at Warwick last month.  That came after a fall in the Becher Chase at Aintree when tanking. Problema Tic has other options, notably the Kim Muir, but I hope he shows up here.

As ever, an absolutely fascinating race. Always the highlight of the first day and one of my most profitable events of the entire carnival. Dripping with intrigue and speculation, as usual, much hangs on the way the race will be run. Some of that comes from the howlers that Ruby and AP served up on Hurricane Fly and Binocular last year, riding to keep tabs on each other and letting Overturn and Rock On Ruby get first run.

The pace could well come from Cinders and Ashes who will go better here on good ground than in either of his disappointing runs this season.  But I find it hard to believe he’s good enough to win. Countrywide Flame will also step up on his last two runs back at the track he loves and with the hill to devour. He’ll be staying on and will outrun his odds. I’ve yet to be convinced by Grandouet and harbour a suspicion that he may be a bridle horse. Geraghty will certainly leave his effort to the last possible moment. Binocular is the subject of favourable noises from Henderson’s yard. McCoy will be looking to make amends. Hurricane Fly is hard to assess this season, having beaten the same old faces in Ireland again. His best chance is on bad ground. Though this is hardly a killer stat, his win in 2011 was on a considerably slower surface than his 3rd last season.

I’m expecting Zarkandar (backed at 13-2 prior to his Kingwell victory) to have travelled through his race better than recently, off a stronger pace and to have enough left to grind out a win up the hill. He is very tough and has track form. I have Raya Star (40-1, but now available at much bigger) as a genuine each way hope. He clouted a hurdle in the back straight during that Zarkandar race, which ended any chance and back on good ground, this massively improving hurdler can get amongst them turning for home.  I’ve also got Cotton Mill at 25-1 who would be very interesting after his very good 2nd in the Betfair Hurdle, but may instead go for the County Hurdle where he is amongst the market leaders.

Cannot wait for this one.

No bet at this stage. Will certainly have a dig on the day, but this is not a race I want to invest too much research in at the moment.

This race, of course, is all about one horse. She Ranks Me (16-1 e-w and 7-1 place, BF). A progressive and game novice. 2 ½ miles is her trip. A good win over Ma Filleuil is probably her best single piece of form back in December and she has come on oodles for that. She needs to be more fluent at her hurdles and to find a better rhythm in her races, but better ground will help. And if Maguire can get those oversize, fluffy white cheekpieces to settle her, then she will be storming up the hill to give Quevega the fright of her life. Of course that one may end up in the World Hurdle and then we are in a very different shooting match.

The old Jewson, run over 2 ½ miles and this year known as the Pulteney Land Investment Chase. Good form coming into the race is important, as is previous Festival and distance form. This market is still very difficult to assess, but I wouldn’t be put off backing something close to the top of the weights here. Buckers Bridge (12-1 NRNB), beating Twinlight in the Flying Bolt Novice Chase last month appeals over this trip. Hazy Tom would be interesting if showing up and so would a few others further down the handicap.

Nap of the day: Zarkandar