March 19, 2012
It was always going to be messy. Even before Paddy arrived to savour the final moments of his Fantasy Festival victory with double malts all round, we had made alarming progress through the Barley Mow's real ale selection.


My head the next morning testified to the damage done by successive Doom Bars Glenlivets and Ardbegs. My phone testified to the struggles of getting home. A text to Bryn sent sometime late that night says, "Couldn't get off Euston tube platform. Couldn't work out where I was trying to get to." I do have a recollection of this. I'd tumbled out of the tube at the right station. But staring blankly at all the signs, arrows and information, my brain couldn't process any of the information. I simply stood on the platform waiting for a revelation. I've only done that journey about three thousand times.

Evidently I did make it home. Mrs A says she heard me bouncing off the passage walls; fumbling, dropping and then finding the right keys; followed by a lengthy silence whilst I disappeared into the downstairs loo. Then I attempted the stairs. She says I didn't turn on the lights. I'm a considerate drunk. I ponderously crawled my way over each step in the dark and stumbled into the bedroom. "You can turn on the light if you want", said Mrs A. "I think I'm a bit the worse for wear", I apparently and rather unnecessarily replied. And then disappeared into the upstairs loo this time. On my emergence, she had already decided to feign sleep. I was all set for a rather good blather about my top day out. But it was not to be. Mrs A had seen the signs.

Looks like I wasn't the only one. Colin and Paddy struggled to get home, falling over a good few times. They had stopped to ask some Italian tourists for directions to the tube, only to find they were actually stood right outside it. This was not our collective finest moment.

The day's racing was right up there though. Nick had reserved a table bang in front of the big screen in the corner of the boozer. Absolute quality. There was even talk of nibbles arriving after the Gold Cup. But in the end that was simply an organisational step too far. 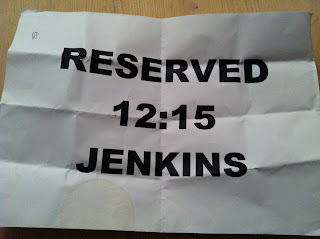 I was on Fantasy Festival duty until Steve's arrival during the Martin Pipe Hurdle. In truth it was settled a long tome before then. Somehow Paddy had ignored all the form lines and advice about sensible betting to lump on Countrywide Flame with about 20% of his pot. The going conditions must have brought out a transformation in this horse because he flew home and trounced rivals who had given him a good kicking in previous encounters. Colin screamed "That's Paddy's horse! Paddy's horse!", as jockey Dougie Costello milked the applause. I don't begrudge Dougie. He missed the meeting last year through injury and this was another victory for the north in a vintage meeting for us. But I do begrudge Paddy. He's a novice! Who is he to come into our precious competition and rip it up by the roots before he's served a respectful apprenticeship? We simply looked round at each other in resignation. Askance. Aghast. A bit gutted.

Paddy did indeed win, but there were a couple of twists and turns along the way. Firstly, Katie, another novice, put herself right in the frame with a mega-punt on Brindisi Breeze who was not so much flying the flag for Scotland in the Albert Bartlett as launching it into the stratosphere. This was a thrilling win by a horse confined so far to the bogs of the northern circuit and whose relentless, insistent galloping repelled the late thrust of Willie Mullins, Graham Wylie and a shed load of cash behind short-priced favourite Boston Bob. One to enjoy next season.

Then Bryn timed his late effort to the split-second with his maxi-bet Synchronised who won the Big One. Is it harsh to say this year's Gold Cup renewal was an anti-climax? That's the after taste for me, partly because the Kauto Star-Long Run showdown failed to materialise. So often these top billings don't. Kauto will surely be retired now and there is no ignominy in him being pulled up here. There's also case to say we've been spoiled in recent years by classy horses winning with style. This year was ground out by the stayers. Synchronised was miles off the pace at the 2nd last and being given the hurry-up by McCoy.

So Bryn and Katie were both making concerted efforts to reel in Paddy. But they needed to find a winner or hit the frame with a big priced outsider in the Grand Annual to overhaul him. Paddy played it cool, minimum stakes, and duly cantered away with the spoils.

Paddy also took a sartorial revenge on Bacchy for some earlier Facebook commentary on his Festival chances....

There is a sub-plot to the Fantasy Festival. If we collectively end with more wedge than we start, then we have bust the bookie and Bacchy must buy us a bottle of fine malt whisky. It has not happened yet. This year, with two bettors well over one-grand mark, Nick and I quickly worked out that if we minimum-staked on the last race, we would finally bust the bookie. A carefully hatched plot within a plot, a subtle conspiracy within a plan.

And it would have worked too. Except that I stared at those big prices on the TV screen with eyes like dinner plates. Tara Royal could win this race easily. And at 25-1 the competition would be mine....all mine, hahaha! So I broke the pact. I split on my mate like a greedy gold-digger.

When it came to the final reckoning, Nick soon realised what I'd done. He was apalled. His sneer cut me down. Bacchy roared with laughter and all I could do was ruefully stroke my chin and grin apologetically. Treachery!

Fantasy Festival is quite rightly the intense focus on Gold Cup Friday with the lads around and the beers flowing. But real punting still happens. I had a much better Friday than either of the previous two days. Salsify was a good winner in the Foxhunters and I picked up a proper place payout on Via Galilei at 40-1 in the County Hurdle. Make A Track in the Martin Pipe made another frame contribution to a good day.

But it wasn't only the Gold Cup that was an anticlimax. I don't fret and worry about the Festival for months to then win the pesky Foxhunters and a podium finish each way consolations. For that reason, this goes down as a pretty poor Festival, yielding a small loss. Of the proper bets in the big races that could shell decent dividends, Rock On Ruby was my solitary success. Those are the results I crave, not the amateur riders' gongs.

The real flaw in the strategy is more obvious than ever this year. Take out all those speculative ante-post bets, even the one that paid out (for merely a place), and I would have been easily in profit. The best wagers were those struck as non-runner, no bets in the first week after the majority of firms started offering this incentive. The analysis is simple. Ante posts are dead. Long live NRNBs. (And Lucky 15s of course.) (And the odd accumulator wouldn't hurt.) (And if there was a nailed on ante-post certainty, it would be rude not to....)

Until next year, chaps.