March 15, 2012
I got a good night’s kip once I’d worked out how to turn the air conditioning from its 2-minute-blast-3-minute-rest default setting to simply off. The fumbling for glasses and trying to read instructions through blurry eyes was worth it.

Good catch up with Colin and Anne over an eat-as-much-as-you-like buffet breakfast, with RP, Schedule of Shame and smart phone with open betting apps spread across a six-berth table. Does the start to the day really get any better than this?

Colin and Anne were heading home today, despite my best attempts to persuade them that another dose of festival mayhem would be equally as good for the soul as the previous day. They were willing (Colin more so), but commitments are commitments. We’d had a blast.

Colin planned to be back in plenty of time for the opener on the box and was first in with his Fantasy Festival selections. I haven’t mentioned the FF yet this year. Bacchy’s genius brainchild of a punting competition, now in it’s thirteenth year, is as red-hot as ever. Colin will be there with the rest of the guys in the boozer on Friday for the final reckoning. For now it’s all about wind up and bluff. Col’s mate and new entrant Paddy is clearly not with the pace. That morning he lodged a £19.75 win bet for odds-on Sizing Europe. What’s that all about?

Getting to the track was as easy as yesterday was hard. The bus sailed through the town centre and I had plenty of time to choose my placepot and enjoy the first Guinness of the day perched at the top of the temporary stand. The sun was breaking through the haze to illuminate pockets of Cleeve Hill. I wish it would do the same for the four-miler. 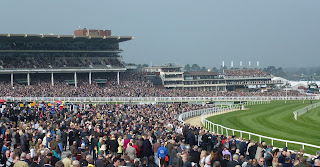 Nev arrived bedecked in a baseball hat and Betfair scarf, clutching a mini-Racing Post pull-out (fantastic innovation) and placepot tickets. “Awright Dave!”. The gaff he’s sorted at Bourton-on-the-Water sounds top notch. He'd brought is laptop down and last night had it hooked up to the telly and had watched the footie. This morning he'd been poncing around his room whilst Spotify cranked out The Stranglers' Peaches through the telly's surround sound speakers. Today is Ladies Day at the track. How appropriate. As if any further evidence was needed about how well set he is, Nev tells me his Italian landlady has been simpering after him this morning. “Oh, Mr price, I remembered from yesterday that you like warm milk on your cornflakes. I’ve heated it up for you. And toast instead of fried bread I think is your preference.” The man is smoother than Caffreys.

Day 2 is my make-or-break day. My stats tell me that I need to land something chunky or I will struggle. The back-to-back Neptune Hurdle and RSA Chase are my most successful across the whole Festival.

Predictably, I was potless in the opening marathon. But Nev had backed the favourite, Teaforthree and was off to a flyer. I opposed the favourite, Simonsig, in the Neptune and was on Cotton Mill backed only last week at 16-1, now about 8 and Sous Les Cieux at 14-1, now about 5½  The latter put in a limp performance, but Cotton Mill was tanking with Simonsig tucked in his slipstream, miles clear from their tame pursuers, when he crashed through the wings of the penultimate flight, apparently trying to run out. I was distraught. Inconsolable. Nev had never seen me like this and didn’t quite know how to deal with it. So we went for a beer. What I hadn’t quite grasped – because it is not always easy to do so in the maelstrom of noise and movement down by the rail – is that Simonsig had absolutely flown home and was not stopping at the post. My boy would have had a mighty, mighty battle on his hands to have won. But this realisation came much later. Still, I’d rather have lost that way than this.

But the roller-coaster analogy isn’t in the top five Festival clichés for nothing. In the very next race I made a bit of a comeback. Whilst Nev was holding his head in his hands at the non-staying performance of Grand Crus (we knew, didn’t we?) I was watching Call The Police overtake him and land me some more than handy place wedge. That’s not normally something to get particularly excited about, although the 25-1 I took was decent enough. But through a large dose of incompetence, I’d managed to back him twice on consecutive days in the early days of NRNB. Backed him once, forgot to note in down. Looked at the Schedule the next day. No reference to the bet, so backed him again.

Just then, the police turned up. Well, this was too much for Nev. “Excuse me constable. We’ve just won some money on Call The Police! Can we have a photo?” You couldn’t script this stuff!

Grand Crus’ defeat had mullered Nev’s big double with Sizing Europe in the Champion Chase. So he dithered a bit before backing Finian’s Rainbow and then blamed me for sowing the seed about this being a perfect exacta race. So he chucked the reigning champ to the forecast to fill second spot. And that was how it finished. But there were a fair few incidents along the way. The Wishfull Thinking fall looked bad from where we were and it was not at all obvious why the jockeys had to take such late evasive action to avoid the last fence. For a brief moment, with both jockeys locked into a heads down drive, it looked like the horses were gong to plough into a dolled-off fence.  Explanations emerged later, but in the middle of the action, it’s not always clear what has gone on.

Nev was doing a little jig about his Finian’s bet. And then I reminded him about the exacta. He did another little jig. And then I said that nearly everyone’s Fantasy Festival double-joker wedge had crashed and burned on either Grand Crus or just now with Sizing Europe. At this, he was on his knees, goggle-eyed, screaming to the sky and double-fist pumping like he’d won the lottery. Never under-estimate the importance of this competition!

For both of us, there were a couple of 2nd and 3rd spots and we collected some place wedge as a result. But no more histrionics. I would love to see Get me Out Of Here go for the big level-weights races. In the Coral Cup he humped top weight into 2nd spot and was almost inevitably beaten by a plot horse from much lower in the handicap. On this occasion it was Donald McCain’s Son Of Flicka. Cue a text from Colin. “Anne’s only bet of the day: Son of Flicka at 25-1”. She’d cleaned up with Cinders And Ashes from the same stale the day before. She has a hotline to the McCain nerve-centre, surely!

And that was pretty much that for Day 2. I was home in very civilised time. Nev had another night in genteel Bourton and was hoping he wouldn’t fall asleep on the bus back, like the night before, when a nice old lady he’s befriended woke him up as they entered the town. Rock n Roll, Nev. See you Friday.


Jewson: Peddlers Cross. No value, I know but I simply can't let him go off unbacked. Though this is absolutely not a festival banker.

Pertemps: Pineau De Re, backed at NRNB 33-1 e-w last week before Pricewise put it up last night. I swear! (He was one of my 40 to follow horses two years ago.)

KIm Muir: No bet yet.