March 04, 2012
I’ve been slightly distracted from Festival preparations this week. Many reasons, I think, but the 40th birthday bash on Friday night was a contributory factor. “Fancy dress” it said on the invitation. “1970’s”. “Hoho” I had replied. “I’ll just dig something out of the back of the wardrobe” I wittily replied. The same joke had been attempted by at least half the guests, it transpired. Humour is a shared experience I always say.

I thought about going as Red Rum. But even the town’s well-stocked, overworked costume emporium couldn’t meet my exacting requirements for the right shade of chestnut coat and sheepskin noseband. So 2nd choice was a barely passable tribute to Prince of Darkness, Ozzy Osbourne, complete with a plastic bat in my pocket for head-biting photo opportunities….of which, sadly, there are none to report. Mrs A had a startlingly good punk makeover and would have given Souixsie Sue a run for her money in an identity parade. 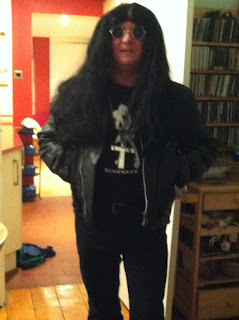 Mind you, things nearly ended in disaster before we even arrived at the party. Walking down the passage my nylon wig became entangled with the metal gate and I had a good five minutes tug of war before I could extricate myself. Mrs A was no help, doubled over with mirth, hugging her convulsing, ripped t-shirt-clad-ribs and tears ruining her carefully applied black eye-liner. There's still a fair chunk of the stuff wrapped around the latch showing distinct signs of split-ends.

I gave the fire pit outside the venue a wide berth, given the incendiary potential of the plastic mop atop my head and recent clumsiness with the gate. But plenty of people were making good use of both that and the adjacent mouth-watering hog roast. We’d arrived with Bex and GC, doing splendid impressions of The Fonz and Hippy Chick. Inside, we found all manner of 70’s refugees. I was not alone: at least three Ozzies (with whom I respectfully and unspokenly knuckle-touched), supplemented by two Angus Youngs for lead guitar duties, Kiss’s Gene Simmons on bass and Aladdin Sane-era Bowie on backing vocals. That’s a super group I’d love to see. Add to that mix, ¾ of Abba, a few white Jacksons and a whole suburb of Village People and you start to get a flavour of the night. Simon, he of the 40th birthday, had put on a great event. Food, drinks and a floor show to savour: a full-on Saturday Night Fever LED tiled dance floor. Quality! It saw plenty of feverish moves and serious shapes too. Many happy returns, mate. 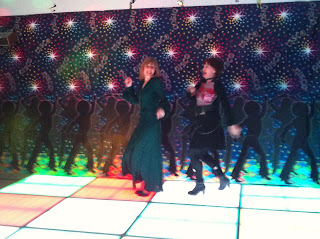 That and other work priorities explain a small drift in my Festival focus. For instance it was only yesterday that I realized my tickets for Tuesday and Wednesday of The Greatest Show On Earth™, purchased from the website a few weeks ago, had not actually arrived. On talking to the helpful gentleman from Jockey Club Ticket Sales, it sounds like they are lost in the post. Postal deliveries round here have been rubbish since the local sorting office was closed. Thanks a bunch Royal Mail. Looks like I’ll have to buy more, with precious little chance of refunds.

More evidence of poor attention to detail: I haven’t really taken advantage of the now widespread non runner, no bet offers. This is something I’ve struggled with in previous years too. I tend to back ante-post because I’m seeking that extra slice of value and am happy to factor in the likelihood of not getting a run into those bets. This means expecting a proportion of my portfolio to be non-runners. When I say ‘happy’, I mean realistic. I can’t be phlegmatic when the ante-posts get clobbered and I’m pathetically grateful to get to the track with a few live ones in the bag. So far, this ante-post season, I’ve lost a few – Hold Fast (Queen Mother), Hidden Cyclone (RSA Chase) and Broadbackbob (Neptune). Peddlers Cross now also looks like a serious Arkle worry. On the other hand, Oscars Well (Champion Hurdle) and Tetlami (Supreme) look handy at the moment, whilst others are still likely to run but probably not at significantly shorter odds than I’ve got them (Voler La Vedette, Weird Al, Realt Dubh), but there’s still some time for that to change. Overall, this is just about par for the course.

But NRNB is a different conundrum. And it’s a growing trend. Each season the bookies drive turnover by offering non-runner, no bet earlier than the year before. NRNB prices are nearly always significantly shorter because of the money back get-out. But there are still options for the value punter. As Oddschecker’s Festival blog points out, “one angle is to look for horses you think are doubtful to run, but that you think would have a great chance if they did. Because there's been no money for those horses (as few people think they're going to run) bookmakers often don't focus enough on them - as a result they can be over priced in the NRNB markets.” A classic example for me is Willie Mullins’ Blazing Tempo. This is a tough mare at around 2 to 2 ½ miles. She’s entered in the David Nicholson Mares race where her odds are 20-1 and the Champion Chase where she is 25-1. I’ve taken both those NRNB prices and would be happy to see her lining up in either event where there is little strength in depth.

In a bid to raise my game, I’ve augmented my Champion Hurdle chances with a NRNB each way on Rock on Ruby. And if you fancy Bog Warrior in any of the three races in which he’s entered, then NRNB at double figure prices is clearly the way to go too. Despite his trainer’s declaration that he won’t be risked on good ground, the 10-1 NRNB in the Jewson has tempted me in. Rain is forecast at Prestbury Park next week…

Festival previews are in full swing now. This is another growing trend, as is their wider reporting in the YouTube and twitter-blogosphere. The value of the views on offer is a fairly mixed. Separating the gossip and rumour from gold-plated information requires the wisdom of Solomon and a fine grained bullshit sieve. I’m also getting a bit fed up of twinkly eyed, winsome smiling trainers who are happy to fob off the betting public whilst tipping their owners the wink and feeding exchange insider dealings. Forums just seem to be another medium in which to do this.

On the other hand, they can be very entertaining and the key is not to take them too seriously. More grist to the mill and all that.

And when my Festival nerves get the better of me and I start jibbering like a confused fool with crumbling logic resting on a series of crazy accumulator perms, I take strength from the wisdom of Ozzy who once said “It could be worse….I could be Sting.” Less comforting, the big man from Birmingham also said “Out of everything I’ve lost, I miss my mind the most.”