March 12, 2011
I’ve mentioned my mate GC and his 50th birthday in a previous post.  The birthday present was to be delivered separately and later. When the time came, we left the precise details a little hazy. His instructions were clear: to arrive at our house (accompanied by the fragrant Mrs GC – Bex - who was in the know), attired in smart casual, prepared for the elements, no passport needed, and packing swimming trunks, just in case. The budgie smugglers were, of course, a complete red-herring (now there’s an image to play with), but would GC know that? Subtle, eh?
Much infantile mirth was to be had at GC’s expense about the likely birthday treat in store. This, er, hilariously, ranged from minding our girls for a day, to minding their Granny. The girls were with us and were to be collected by Granny. It has to be said that Granny is fearless. In her 80th year she has tried her hand at both canoeing and horse-riding for the first time. So GC was quite warming to the idea of accompanying Granny for the day. Sky-diving maybe. Or a crocodile wrestling?
The trunks made another verbal reappearance amongst the futile wind-ups as we passed a flooded gravel pit:
“It’s actually a wreck dive over there in Leighton Buzzard. Did you bring your wet suit, GC? No worries, you can borrow mine. Only I’ll be wearing it at the same time.”


“Not a problem, Mr A. Back to back or front to front suit you?”
Bleugghh!!.
We disembarked at Wolverton where there should have been one taxi with Granny inside, waiting to whisk the girls away and another waiting to whisk us on to the venue. There were none. Only a blustery rain-lashed car park. I looked at Mrs A who offered a supportive smile. We waited in an open fronted tin shack serving as a ticket office, avoiding drips from the leaky roof. Wolverton used to be home to the mighty BR workshops turning out rolling stock for the finest railway in the World. Most of it has gone now. Including, one dark night, the removal of the station roof and fittings. Pulled down, despite being listed, to save repair costs. It is a bleak station now.
I glanced at GC. Hands thrust deep into pockets. Trenchcoat collar turned up. Double woolly balaclava hugging his gnarled face. OK, I made the last bit up. He was gritting his teeth though. And I swear I could hear him humming ‘Happy Birthday to me….’. He surveyed the windswept scene and asked with a grin “Is this the bit where I say thanks for my birthday present?” How we hooted. Nervously in my case.
Just then, the SpeedLine taxi cavalry came over the hill and we were on our way again. I’d bagged the nice roomy front seat because I was in charge of directions. Very important. I looked behind as I uttered something witty (possibly) and noticed that, GC, a bit bigger than me, was slightly cosier. Elbows tucked in and hunching over, neatly wedged between Mrs A and Bex. A thorn between two roses? A fart between two cheeks? Hard to say really.
By the time we’d navigated the Old Stratford A5 roundabout GC had worked it out. “I think it’s Towcester races” he beamed. 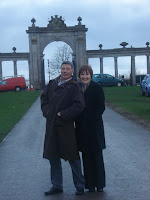 I was getting worried about the rain. Squally showers kept bumping into each other, blowing in from the west on a sharp breeze. The ground at Towcester was already heavy. Many more minutes of steely stair-rods and we’d be flirting with abandonment. My jitters didn’t calm much as we scampered through rain bouncing off the tarmac to get to the Empress Stand.
But once inside I was happy. This was all new. Towcester is a track I know very well and love. But I’ve always been with the proles next door. Never through the ‘hospitality guests’ entrance. I ponced up to the reception, puffed out my chest and said, “We’ve got four reservations for the Empress Restaurant please”.
We were shown upstairs, through double swing doors and into an open plan, well appointed dining room. There was a bar at one end and a huge glass wall leading to private balconies at the front. Betting stations with TV screens were strategically placed around the edges. The dining tables were beautifully set and already had waist-coated waiters fussing around seated guests. We introduced ourselves and were shown to table 16, handy for the bar, the telly and the betting booth.
I think GC was impressed. He didn’t stop grinning until his first race loss. He must have secretly been fearing an afternoon of pot noodles and fizzy lager on the steps of the wind-buffeted grandstand. I was impressed too - and a bit relieved. It’s not always clear exactly what you get in these circumstances. But I have to say, Towcester put on a top show.
There was already wine on the table, but I went to the bar for some aperitifs. And received a verbal cuff on the ear for my trouble. “Take a seat, sir. We’ll serve you at your table”, said waist-coated lady, mildly surprised at my procedural gaffe. It was a young, fastidious chap called Mike who arrived to take our order. He looked after us wonderfully. And when the main course was a bit late, he brought us a complimentary bottle of wine and was full of apologies “I’m so sorry for the delay, the kitchen’s full.” We wondered what that meant, precisely. Cooks jammed in right up to the rafters, all vying for hob space? An explosion of expanding insulation foam, pinning an army of sous-chefs against the wall? The wine was a welcome, but in truth, unnecessary gesture. We were there all afternoon and would rather have good food cooked well than rushed. And indeed it was. Smoked salmon with a crab and coriander salad; chicken breast in mushroom, garlic and Madeira sauce with fondant potatoes, butternut squash and roast beetroot; followed by espresso panecotta with chocolate sauce and Viennese biscuits. (I guess they were all out of arctic roll…)
Our betting rep was called BJ. He was also very attentive. “That’s a nice watch”, I said, dazzled by a glittery pink metal bracelet holding a face the size of an Olympic discus. “Fank you Sir, I left my gaudy one at home as it’s a Sunday”. BJ was a good laugh. He helped out Bex and Mrs A when they did that time honoured, doe-eyed ‘I-don’t-know-what-I’m-doing–this-betting-is-so complicated’ trick, merely because they didn’t want to queue at the booth. Shameless. Mrs A thought she recognised something in his camp manner, his rolling gait, and his sizeable girth. “He would remind you of Peter Kaye in a not-remindy kind of way, don’t you think?” We all merely blinked back, trying to picture what that meant, exactly.
Not that Bex and Mrs A needed any help on the betting! Bloody hell! Bex bagged the winner of the first, a lovely looking prospect called Whoops A Daisy, trained by Nicky Henderson. The horse glided through the mud as if on rails. And later she picked up again when Round The Horn cantered up by the length of the straight. A few near misses for GC and for me, but they don’t seem pay out much for those. 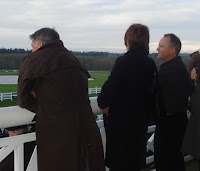 We’d been watching the races from the private balconies running across the front of the restaurant, removing us from the hurly-burley of the steppings below us. Our vantage point provided a superb view to catch the races, but also opened up the vista over the track and down to Towcester town nestling in the valley. It may not be Goodwood on the Downs or Cheltenham in the Cotswolds, but this is still one of the finest aspects in racing.  Back at the table, just in case we were getting peckish – obviously a real risk - afternoon tea had arrived. Hardly seems a moment since the three-course lunch. Life is just such a struggle sometimes. I tucked into scones, jam and clotted cream with the gusto of a half-starved waif, ready for the next race.
Mrs A was sticking to her tried and tested strategy of backing long shots. So how did she miss Tuvalu who won the 2nd at 40-1? Because she was on already on Fantastic Morning at a slightly more conservative 25-1 is why. But there was no jeering and mickey taking when Tarabela won in some style at 28-1! Ms A went to collect her winnings from that nice BJ man in the Ladbrokes booth and she positively swaggered back to the table before slamming down the fattest wedge of crinkly greenbacks I’ve ever seen. Well, as fat as £60 can be, anyway. We declared that she was an absolute genius of the track and I was a bit worried she’d gatecrash my trip to Cheltenham. But only a bit.
On a sourer note, the green screens went up around Panzer who had fallen after the last. This is always disturbing, and particularly so in front of packed grandstands. It usually only means one thing. But thankfully the horse was no more than winded and was soon led away, none the worse.
And then it was time to go. Blink of an eye and all that. But we got our bets down for the last before heading for the taxi. SpeedLine were late and we had connections to make, so that was a frustrating. But it did mean we just about caught the race on the big screen. Bex ran over to give us a running commentary, but we couldn’t hear her properly back up at the gates. Whisps of ‘red hat’….’stripey top’….’over there’ drifted on the breeze, accompanied by random gesticulating and interesting facial expressions. We got the message, though. Mine and GC’s pick, our nap of the day Syndication from the Venetia William stable - a Towcester specialist - hosed up. The lucky last! The get-out stakes! Thank you very much! 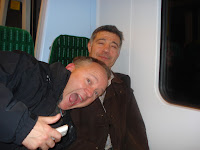 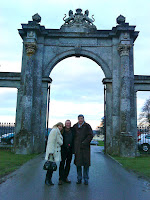 So we all went home happy.
We finished off the day with a few drinks back at GC and Bex’s and staggered home stuffed, watered, merry and rich (well, in experience if not exactly in money!). That really is the way to do it. Roll on 60, GC!

Becky said…
Hilarious once again, had me laughing out loud - especially the bit about you `poncing' !