March 14, 2011
We’ve been settling in to our base deep in the Cotswolds, readying ourselves for the onslaught tomorrow. Bruv has been hard at work, poring over the Racing Post to construct elaborate each-way Lucky 15s and accumulators. 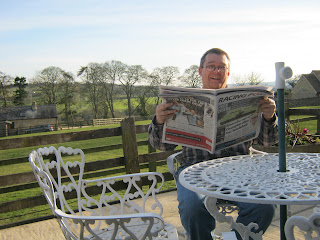 Our Festival bunker is in the hamlet of Maugersbury, tacked on to a spur of Stow on the Wold, overlooking gentle hills and wooded valleys. We have wi-fi, which is a pre-requisite these days. Bruv was checking the decs earlier and says “Ooh, Sedgefield tomorrow. I’ll just have a look. “Sedgefield!” I decry. “On the eve of the very greatest jumps meeting in the World, you are checking out sellers at Sedgefield?” “There’s some good racing at Sedgefield, I’ll have you know”, Dad pipes up. “On a par with Catterick.” Hmm. Damning with faint praise as far as I'm concerned.
Stow is splendid. Handsome soft Cotswold stone buildings, pretty shops, fine pubs and restaurants. Looks like we’ll struggle for a greasy spoon first thing tomorrow!
The town is enduring an invasion of racegoers. We picked up our first festival tip 15 minutes after arriving here. In the Tourist Information, the Manager says, “Hi, are you here for the races?” We grinned back. “Do you follow the horses much?” We kept grinning. More nervously. Would she want a tip? “I had a trainer in here the other day, looking for accommodation nearby.” Now we were interested. “Yes, a Mr Harty, I think . Can’t remember his horse. “Captain Cee Bee” I said. “I think it’s Eddie Harty”, I offered. “Yes, I think that was him. He said his horse would win the Champion Chase on Wednesday!”
I’m looking forward to the action finally starting tomorrow, after months of anticipation. Sorry that Binocular isn’t lining up in the Champion Hurdle and even more disappointed about the way that Henderson and the BHA handled it.
The ante-posts have taken a hit over the last couple of days. The remainder, augmented by recent additions, give me a hand looking like this:
1.30, Supreme – Hidden Universe, Sprinter Sacre
2.05, Arkle – Realt Dubh (e-w), Rock Noir (e-w)
2.40, Stewart Family Spinal Research handicap chase – King Fontaine (e-w)
3.20, Champion Hurdle – Peddlers Cross
4.00, Cross Country Chase – no bet (yet!)
4.40, Mares Race – Sparky May, Alasi (e-w)
5.15, Centenary Novice Chase – Premier Sagas
Peddlers and Realt are my most realistic chances of success.
Into battle, then!

bacchy said…
Must be one of them 'fraudulent slips' mate - because some say Peddlers should actually be running in the Arkle this year. And how far would he have beaten this lot by? Good luck.
Tuesday, 15 March, 2011