The first day at the Festival is the best. Four days of fine racing lie ahead and the expectancy and optimism has not yet been punctured. It is a perfect scenario.  Alastair Down in this morning’s Racing Post captures the mood perfectly: “Over the next four days the tumult will build to a series of spectacular crescendos…..for sheer sustained ferocity of competition coupled with unbridled emotion, there isn’t a sport that can get within hailing distance of this cherished week”. Fills you up doesn’t it?
We are up and about early. There are some last minute additions to opening day portfolios. Bruv is jabbering away about bets that can only hint at the chaos going on inside his brain. “If Cue Card wins the first, well that’s the key and sets everything up. And menorah. Just can’t see him out of the first three. I can see Banjaxed Girl bolting early and leading them all a merry dance. Need to get ‘em in a combination.” These are classic signs of Festival Virgin Rambling. I know because I’ve been there. As a veteran of 12 years, I’m happy to watch Bruv grapple with the scale and the enormity of the thing. Desperately trying to resist backing every horse in every damn race of this puntathon, chasing the big money.
We head up to the King’s Arms on the Square for a quality ‘race-goers breakfast’, including black pudding, lambs kidneys and a free Racing Post (served separately). RUK is on the telly and presenter Stuart Machin is banging his head against a brick wall trying to get an opinion out of his studio pundit  Jonathan Neesom. This non-commital sage will simply not put his neck on the line in any race for anything. Isn’t that his job? At one point Stuart looks at the camera and shrugs “I can only ask the questions. What else can I do?”! 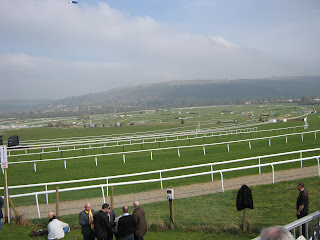 We hit the track early and find a good berth in the seats by the uphill fence. The track looks beautiful. The two festival virgins on my right are still trying to wind me up. “So that’s the famous Cheltenham hill is it? Towcester’s worse. One of these runners has good Catterick form. Are you going to mention that in your blog, Dave? Gaffe track bunnies. And there’s more behind. A smartly dressed welsh lad approaches his mates with a fist full of a placepot slips and cries “OK lads, who’s the joker who picked number 11 in a ten runner race? You Dai!” Hoots of derision. Earlier they had asked us what the minimum bet was on a placepot? “Can you do a quid?” Last of the high rollers from the low valleys.
And then that famous roar when the tapes go up for the Supreme. A bone shaker. We are graced with a finish to suit the occasion. Four in line at the last. Sprinter Sacre looks like he might power away from re-hot favourite Cue Card, then Spirit Son stays on passed him and finally Al Ferof screams home for the Paul Nicholls yard. Nicky Henderson’s horses 2nd  and 3rd. Cue Card out of the frame. Hear that? It’s the sound of a million combinations and accumulators being ripped up, accompanied by the riotous laughter of celebrating bookies. Another year, another loser in the Supreme for me. Still to break my duck. The Arkle doesn’t disappoint either. Finian’s Rainbow is prominent and begins to turn the screw at the top of the hill. For a moment, I think he’s got away, but Ghizao momemtarily challenges. Eventual winner, Captain Chirs begins to stay on after some right howlers early in the race. My boy Realt Dubh also stays on, but doesn’t seem to have the pace up the hill to catch the leaders. I didn’t think the jumping of Captain Chris would hold together under this severe examination, but he’swon this well. Henderson 2nd again. As he is in the next when Carole’s Legacy can’t quite get to Bensalem in a stirring battle up the straight. Bensalem’s jumping is also suspect, but he managed to jump through all the holes that Reve de Sivola had punched in the fences. Much to my Bruv’s disappointment.
I swear there was a respectful silence, a hush of expectancy across Prestbury Park before the Big One. Or maybe I imagined it as I wound myself up for the race of the meeting. It didn’t disappoint, even if the result did. I am so far into Peddlers Cross, I can see what he had for breakfast and I’m gutted he couldn’t nail this. The race panned out beautifully for him and there can be no excuses. Hurricane Fly found more on the run-in than I was ever expecting and he is a worthy champion. As they met the last together, Peddlers slightly the more fluent, I was convinced that my boy’s proven stamina would come into play and burn off  the Irish raider. But in a thrilling duel, the Fly dug deep and was actually going away at the line. Great race.
The cross-country event is perhaps an antedote to a great race. Though it does provide interesting obstacles with curious names such as the Aintree Fence and the Double Banks. It gives commentators plenty of material to play with. The contrived highlight must be Mike Cattermoles’ food-related quip, “One Cool Cookie runs out at the cheese wedges!”
The rest of the day was a mixture of small wins and near misses for the three of us. Quevaga was again imperious in the Mares Race. I was out of the money in 2nd and 4th. Dad got the placepot up, but only to small fractions, so he didn’t go home rich. We didn’t go home quickly either. Messy car park exiting.
But a few beers and a welcome fish & chips supper have enabled me to lick my wounds, reflect on a very good day’s racing, and reload. I’m recharged and ready for Day 2.
So, looking at remaining ante-posts, running accas and new top ups, my recovery strategy (and I’ve been here many times before at the end of Day 1) involves:
Four Miler: Pearlysteps (ew)
Neptune Hurdle: Rock On Ruby, Oscars Well, So Young (accas)
RSA Chase: Wymott, Time For Rupert (accas)
Queen Mother: French Opera (ew)
Coral Cup: Aegean Dawn
Fred Winter : Jubail
Bumper: Ericht
Once more into the breach….