Bigger than the Pope

Freddie Flintoff has retired from competitive cricket. This is no surprise. Last Summer, Fred traded the remains of his gladiatorial test match career for some time and surgical expertise that might eke out a one-day future at the highest level. But it was not to be. His crippling knee injury is not improving and on Friday he took the advice of his medical team to call it a day. 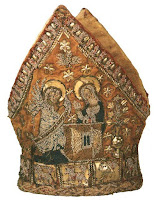 In some ways it is an old story. When he left the Ashes stage in September last year for another knee op, not many of us believed he would be back. So it was a mild surprise to see such blanket coverage of this decision last Friday. In fact the Metro declared it to be more significant than the Pope’s arrival in Edinburgh. Based on trend analysis of tweets during the day, Freddie knocked the Pope into a cocked mitre. Freddie Flintoff is bigger than the Pope. It’s official. Well, in the Twittersphere at least. 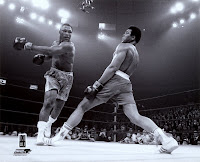 There can be no doubting Flintoff’s hero credentials, though. The epic Ashes series of 2005 produced, without doubt, the most sustained high quality drama I’ve witnessed anywhere on a cricket pitch. Good test matches have their ebbs and flows, their moments of glory, skill and passion. But that series had enough adrenaline and emotion to make the X Factor look plastic. (What? It’s not for real?) Never mind u-turns, plot twists and shimmies to make Eastenders look prosaic. Not to mention enough comparisons with greatness to exhaust a hackneyed purveyor of similies (that’s me). Just one more similie, then: that of a heavyweight boxing match where two world-class fighters at the peak of their powers slug it out, toe-to-toe over the maximum distance, neither knowing when they are beaten and both conjuring up more big shots when each looked floored.
This prompts to me relive right now, in unapologetic partiality, that golden Summer of triumph. Duck out now anyone who is wincing at the prospect of overblown sentiment and nostalgia. 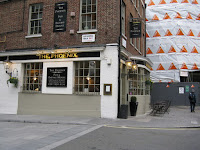 Twenty20 was a fresh, untried format in those days. (It has since been shamelessly over-exposed, the ECB yet again killing the golden goose.) When England  beat the Aussies in this exciting new competition early that Summer, we dared to hope that something good was on the cards. We were drinking in The Phoenix, round the back of Buckingham Palace, and watching the encounter on the big screen. The Phoenix became the backdrop to our Summer. Me, Nick, Bryn and Steve, amongst a cast of thousands, engineered late lunches and early departures to ride the rollercoaster. 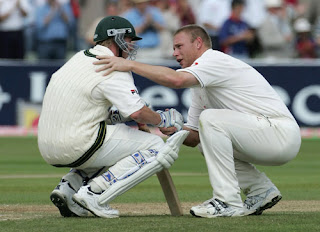 The Aussies’ comfortable win at Lord’s in the series opener was enlivened by Harmison genuinely striking the fear of God into their top order. But was otherwise grim viewing. England bounced back in some style. At Edgbaston,the sight of Trescothick bludgeoning Lee and co to the four corners of Birmingham on the firs day had the pub reeling and goggled eyed. That positivity led to the first 400-run+ day in the history of the Ashes. It set up a strong position for England. The final day saw Australia defy and yet again defy England’s victory charge with low order batsmen repelling missiles from Freddie, Hoggard and Harmison. Bret Lee was stood firm with first Warne and then Kasprowicz. Only a few deliveries remained when Harmison forced Kasprowicz* into evasive action with yet another brutal throat-ball. It popped up to the slips and England had won a rip-snorter. The scenes of victory included the now iconic (an over-used term, but possibly appropriate here) image of Flintoff consoling Bret Lee with a word and a gesture which captured forever those fleeting moments of poignancy in combat.
At Old Trafford, we were treated to a majestic first day ton from Vaughan. England dominated, though Warne took his 600th test wicket (cue a generous standing ovation), as well as a first innings 90; and McGrath ripped out another five-fer. By the last day, Monday, we piled down The Phoenix to watch as much of Australia’s chase as possible. They needed a further 399 to pull off a World Record 423 winning run chase. England needed 10 precious wickets. The pub was packed. This series had ignited everyone’s imagination. 20,000 were locked out of the ground that morning. I think they must have all got on the train and emptied into our pub.  The Polish barmaid, bless her, was overwhelmed and perplexed. Nothing in her career thus far had suggested a slow Monday lunchtime in a Westminster would unleash a blizzard of business. We tried to explain the significance of the quickly unfolding events. We failed. England failed, too. But only marginally. Australia were nine down as the overs ran out with Brett Lee – again - and Glen McGrath fending off Steve Harmison and Freddie at full throttle. Thrilling stuff.
One-one then, and on to Trent Bridge. England again off to a flyer. This time Flintoff hit a blistering ton, and England forced Australia to follow-on  for the first time in 17 years. Matty Hoggard and Simon Jones reverse swung England into the ascendency on a peach of a Sunday afternoon. That left England with 129 to win. Which, in the spirit of the series, became a nail-biter. Hoggard and Giles saw England nervously home. We counted down the runs single by single. 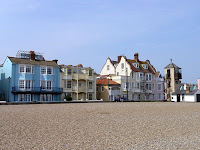 That was a great day all round. Nick and I had taken our families to Aldburgh in Suffolk for the Bank Holiday weekend. Great weather, great apartment, outstanding company. On the Sunday morning we informed the girls we’d be playing golf and that it would be great if there was Sunday lunch on the table when we returned. Well, sure enough, after a great nine holes at the wonderful Aldburgh golf club we tucked into delicious roast beef and all the trimmings. There was a bit of giggling and knowing looks from the wives, yet we thought nothing of it. But as soon as the plates were licked clean, they shot out of the door with a barbed “OK boys, see you later.....maybe!” and disappeared, leaving us with a mountain of washing up and the kids in need of entertainment. Turned out they had ensconced themselves in a beach-side pub with a bottle of wine and spent the afternoon tittering about their perfectly executed revenge.
Well, the flip-side suited Nick and I perfectly. Once the DVD was running on the other telly and a few cans of Boddies had been acquired, we blissfully rose and fell on the tide of England’s fortunes in Nottingham. The perfect outcome for all concerned! The beers were for us, not the kids. I’d just like to be clear about that.
The decider at The Oval caused some family tensions of a slightly higher order. Ben had speculatively e-mailed the lads back in March about desire for Sunday tickets at the Oval. Ben was a bit apologetic because Sunday was the only day available. A bunch of us signed up thinking that either the series or the Test Match, or both, would be dead by then.  It was nice, for a change, to be spectacularly wrong.

The tensions arose when I dug out the tickets to find that Sunday 11th September was the day of daughter number 1’s 8th birthday party. She was having about a dozen hyperactive friends over for a couple of hours of cake eating and screaming. “Got anything on that day, Dad, or shall we move it to the weekend after?”, said Mrs A, sometime in mid-August. “No, no that’s fine. Can’t see what else would be happening then”, I blithely replied. I can even remember thinking that the cricket season would be well over by then.
Just to put this in context, tickets for this match, the decider in the finest series seen in a hundred years, were changing hands on e-bay for a minimum of £500. I did a shameful thing. I sold my ticket for a grand. No I didn’t! I went to my lovely daughter, put a comforting arm around her shoulders and said “Would you mind if I didn’t come to your birthday party, darling? I’d only get in the way.” See? Shameful!  “No, that’s OK, Daddy. I think Granny and Grandma are coming”. Helen looked at me with narrowed eyes and a thin smile. “You’ll pay!” she murmured. I still am. In many ways. My act of familial betrayal is aired every time we turn our attention to planning Elizabeth’s party. 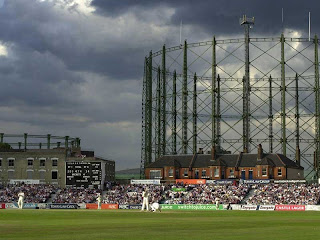 Because of rain interruptions, the match was finely poised by the time Sunday 11th September came around. Me, Nick, Bryn, Ben and a couple of his mates took our seats in the Lock Stand and soaked up the atmosphere. Team England had risen to the occasion. Vaughany and his troops bounded on the pitch to the rousing thump of Jerusalem. The day belonged to England. Early and timely wickets from that man Flintoff and Hoggard stopped the Australian charge in its tracks.

By mid-afternoon, England were batting. Shortly after Strauss was bowled by Warne, the umpires conferred in the middle under glowering clouds. The light was offered to the batsmen and they headed straight for the pavilion. The place erupted. Never have I known the crowd rapturously cheer a decision to suspend play. The irony was not lost on us and we couldn’t shake the grins off our chops. Every minute was precious and this was a key moment. Play resumed for only a short session later in the day. Hysterically, the Aussies – Warne and McGrath most notably - came out wearing shades and sun cream to hoots of approval from the crowd. 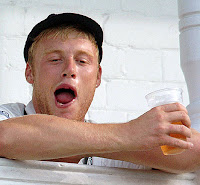 The next day we were predictably down The Phoenix as early as possible. My boss was there. His boss was there. Everyone was there. The place was stuffed. We coaxed Pieterson to his maiden ton, willed Warne to spill the one slip chance that came his way (“Warne’s just dropped the Ashes”), and cheered England to a position of safety. The match was drawn and we won the Ashes 2-1. Cue the clichés: Epic, thrilling, heroic, intense, once-in-a-lifetime. And profitable: I’d backed the correct series outcome at 12-1. The reaction was, in truth, a little over the top. MBEs all round, open-top-bus-ticker-tape parade. But at the time I lapped it up.
And Freddie was Man of the Series. He had embodied the talent, tenacity and team spirit of the encounter. He had lived it large on the field and off.  This was to be his finest moment. Those injuries mounted up and he never hit such heights again. But who could? England lost (2007) then won back the Ashes (2009), but Freddie and the quality of the competition were not close to the level attained in 2005.

So, bigger than the Pope? Well, my Mother-in–Law wouldn’t think so. She got up at 1.30am this morning to board a coach and battle through multi-tiered security checks so that she could sit in a field in Birmingham this afternoon to squint at a giant screen of the Pope preaching to her and 80,000 others about a dead vicar.  I don’t think Freddie quite commands that devotion. But for a time in 2005 he was pretty close.

*... and not Lee as previously stated. Colin, ta. As you say, schoolboy error.

PCheese said…
What league do the Vatican City play in? Without having seen them in action, I couldn't possibly compare the Pope & Freddie
Tuesday, 21 September, 2010