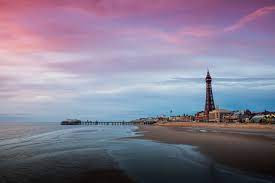 From Southport to Blackpool. The sublime to the ridiculous? Not quite. For all Southport’s genteel, let’s-retire-somewhere-nice persona, the place left me a little underwhelmed. For all Blackpool’s kitsch, tack and brass, I have a soft spot for the town.

I’ve been coming here for years. As a kid we visited the illuminations in October, regularly staying in a boarding house on one of the many identical streets of two-and three storey Victorian terraced b&bs that all led to the seven-mile seafront. Mrs A’s Mum and dad came here for their honeymoon and returned in 1997 to celebrate their Ruby Wedding Anniversary. We came up to surprise them for a party, my daughter only a few weeks old.

Blackpool’s emergence as a resort is similar, if a touch more dramatic, to the growth of the Scarboroughs, Great Yarmouths, Morecambes and other popular destinations of our great British seaside.

The town’s growth has been fairly rapid since the late 18th century, when it was transformed from a small hamlet clustered around a “black pool” into a fashionable sea-bathing centre. In the same vein as the publicity afforded to the health-giving properties of spa resorts, the early popularity of Blackpool can be traced to writers and doctors who popularised the benefits of bathing in seawater.

Nearby Lancashire industrial towns provided a mass of potential visitors and the introduction of fast railway services gave them a means of getting there. Blackpool’s 19th-century growth was rapid. The fine sands along this stretch of the Irish Sea were exploited with promenades, piers and, in 1895, the building of Blackpool Tower as a 520-foot homage to the Eiffel Tower. The introduction of illuminations, seafront decorations and a tramway all followed and cemented the town’s position as the pre-eminent seaside resort in the country. The population currently sits at around 142,000.

My most recent visit was in 2016 for my Sister-in-Law’s birthday. Sue’s party was a scream, even if it was further landmark evidence of the world moving on apace. Fifty? So how come she looks thirty? And acts fifteen?

Sue’s great friend Leye owns the Viva Club in Blackpool and had arranged for the birthday party gang to have ringside seats for an evening of Las Vegas-style goodtime showbiz. Pukka variety cabaret given a 21st century twist of sass and cheek. Leye hosted a revolving cast of singers and showgirls, whilst delivering his camp comedy and set piece songs that involved at least a dozen costume changes. No-one works harder in the business and the capacity crowd lapped it up. 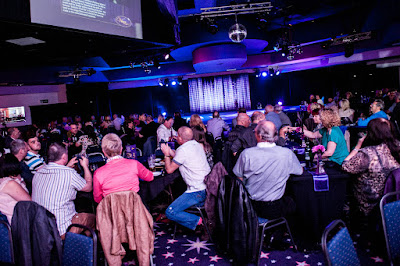 I was interested in my girls’ reaction who, exposed to too much tosh like Hannah Montana and Justin Bieber when they were growing up, had been deprived of gems like Seaside Special (only the inspiration for the blog series, of course) and, er, The Des O’Connor Show. Hmmm. Whatever. They had never seen anything quite like this. That much was apparent in their initial confusion and awkwardness about what exactly was going on. until they got the point of the glitzy, tongue-in-cheek, but high quality performances, and with cheesy comedy and the air of self-deprecation woven through. Daughter No 2 loved the dancers, the glamour and style, and then leaned over at one point to inform me that “That girl has an AMAZING voice”. This was Jenny Ball and when she later belted out a faultless blues standard, Daughter No 1 said ‘Oh, this is by Etta James. I love this!” When, in all her 18 long years, did she discover Etta James without telling me?

Our inimitable host kicked off the second half of his show with personal birthday wishes for Sue, laced with sincerity and noticeably absent of showbiz cheese. There was chance to catch up with him properly after the show late into the night. Luckily there was also lots of chances for outrageous Dad-dancing (‘madness, madness, they call madness….’); oh and thankfully just time to squeeze in a quick rendition of Fields of Athenry too with the Irish wing of the family choir-mastered by bruv-in-law Chris.

Chris has seamlessly stepped into his Mother’s shoes, possibly without knowing it, where matters of blather are concerned. Mrs A’s younger brother had been in the front seat of the taxi down to the venue at the start of the night. I’ve never heard a taxi driver out-bantered before. But it happened then.

“Yeah, Blackpool’s alright isn’t it? I’ve been here on a few jobs. There’s a good pub just down there, they used to show the Chelsea games. Just down there. Queen of Adelaide…Oh it’s gone…. Harharhar. Blimey. ” The driver never had a chance.

As we pulled on to the front, Chris was still entertaining him. “That tower’s alright isn’t it? Sorta special. Sorta unique-like. Well apart for the original of course! Harharhar!” He gave the taxi driver a thump on the arm. The driver looked round at us, his slack, redundant jaw flapping like the tower flags in the force 10 gale. Talked into submission. His Mum would have been proud.

The finish to the night was suitably late, back at Nick and Paul’s. With a generosity bordering on lunacy they had offered to put up most of Sue’s entourage for the night. In a scene reminiscent of Glastonbury, there were bodies everywhere. I fell into slumber against the backdrop of doors opening and closing as merrymakers  (including my two daughters) tried to find where they had left their sleeping bags, toilet bags, handbags and probably glad rags too. Daughter No 1 woke up to find Auntie Sharon snoring away in their double bed when she swore blind it was a cousin Robyn when she went to sleep.

Next morning, in something resembling a steroid-induced mash up of Saturday Kitchen meets meaty Bake Off, Nick and his glamorous assistant Glenys provided a never-ending stream of fried breakfasts in a double-sitting of guests hanging out in the conservatory, kitchen and dining room. We had barely washed down that lot with the first birthday drinks of the day when out came the beef pies, hot pots and cheese flans, all sourced from the farm shop round the corner. How good can it get?

Or maybe how bad? Not wishing to dampen the mood, but in a tour of Britain’s coastline, it is only fair to describe Blackpool as a town of extreme contrasts. Alongside the multi-million pound seafront regeneration and new money for the business district renovation, Blackpool remains one of the most deprived towns in England. The Department for Communities and Local Government, my old employers back in the day, periodically releases the Index of Multiple Deprivation. This little gold mine of statistical data looks at the way poverty and disadvantage, such as low income, unemployment, bad housing, poor health and low educational achievement can all combine in small geographic areas.

Blackpool is ranked seventh most deprived town in the country. It was ninth worst in 2010. Bloomfield, an area of about 2,000 households south east of the seafront near Blackpool FC’s football ground is ranked 2nd worst out of all 32,844 areas in England. The most deprived area in all England, one worse than Bloomfields, is also a coastal area, over on the other side of the country, just east of Jaywick in Essex.

There is plenty of evidence of boarded-up properties around the town and homelessness is on the rise. Deaths from misuse of drugs in the UK are at an all-time high. The rate in Blackpool is far greater than anywhere else in the country.

Most traditional seaside towns face challenges. Blackpool seemingly more than most. The council recognizes this. “Millions of people come from all over the United Kingdom every year to enjoy our unique environment and attractions,” says its new strategy. “Tourism continues to dominate our town like no other place in the country.”

The region has ridden shifting trends before. Gay-friendly businesses helped to regenerate the local economy through the pink pound at the start of this Millennium; and the town is still a huge magnet for stag and hen parties. The town is also home to the Blackpool Opera House, one of the largest theatres in the United Kingdom. In addition, Blackpool has developed as a major British conference and convention centre. There’s also the ‘Strictly..’ factor, not lost on the Council, whose current drive is to pull in a new type of visitor through cultural tourism and growing the creative talent sector. I’d like to think that Leye’s place at Viva can be part of a bright future.