This is where the coastal blog posts get even more sketchy than usual. My only visits to Pembrokeshire were when the kids were little, in the early Noughties. I haven’t managed to add any recent trips to that visit. I can’t pretend that what follows here does justice in any meaningful way to this beautiful, craggy seascape of tiny coves, flowing bays and pretty seaside towns. Particularly as one of the visits largely centres on a bout of seasickness out of Fishguard ferry terminal. But hey, this was always going to be an imperfect project, so I will plough on regardless.

Our journeys over to this far-flung, westernmost corner of Wales were, in common with many others, to rendezvous with the ferry for Rosslare across the Irish Sea in County Wexford. Mrs A’s family are all Irish and although most of the rellies were based in north Dublin, we had some wonderful holidays combining visits to the capital with stays around the south coast, from Fethard to Dungarven to Kinsale to Skibbereen to Baltimore. Entry via Rosslare and exit via Dublin/Dun Laoghaire. And sometimes the other way round.

Fishguard is really only a village. Three-thousand odd souls clustered around the old quay at Lower Town and up the hill across the cliff to the village centre. Brightly painted two-storey cottages, pubs, craft shops, tea rooms packed into narrow lanes. All very picture-postcard on the surface, but maybe just a bit too quiet to be properly thriving. The Royal Oak pub was the location of the surrender of a bunch of French Revolutionary invaders in 1797. This was the final mainland invasion seen in Britain. It’s hard to know why the French picked this outpost as a launch pad for conquest. It really is a long way from anywhere, let alone the levers of Government in Whitehall.

If there was time before the ferry departure, we’d have an ice-cream on Quay Street where Cwm Gwan empties gently (most days) into the Irish Sea. Then make our way over the headland into Goodwick at the western end of Fishguard Bay for the ferry terminal. All very civilised. 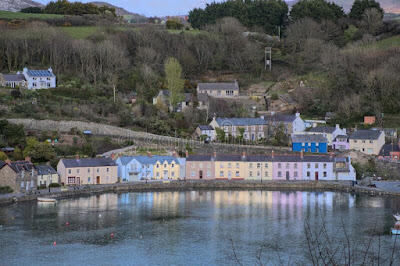 Except when it wasn't. One crossing, stamped indelibly on the memory, saw us give the Quay Street ice cream tradition a miss. Firstly, we had to find a chemist tout-suite when it emerged that Daughter No 1 had brought a few friendly headlice with her on the journey. Every parent's unbridled nightmare. The little buggers had been rife across the school in the previous week. We thought we'd escaped. But no.

Gallons of Hedrin duly purchased, we had to make further haste on looking skywards. Banks of dark, fat old clouds rolling in from the west. A deep Irish Sea depression was high-tailing into Wales and we had precious little chance of avoiding it. Sure enough, the ferry left on time and ran smack in to pitching seas and cross winds barely before we had seen the Fishguard harbour walls, and Pembrokeshire's granite cliffs disappear over the horizon.

There was nowhere to hide. Within the hour, groaning bodies were strewn around the passenger lounge as if there had been a mass poisoning incident. A steady stream of travellers staggered to the loos and back, or made for the deck doors to heave overboard, hoping the wind didn’t offer an unfortunate blowback. The scenes became steadily more chaotic, and made wilder still by debris of optimistically purchased snacks flying around like chaff: polystyrene cups, plastic bottles, sandwich wrappers. The crew had bolted down and packed away anything vaguely dangerous. Almost as if they had seen this before… Everything else skittered along the sticky carpet tiles with each juddering smash of a bow wave. Toxic smells of regurgitated junk food hung in the air like a plague.

Mrs A was prone on a three seater bench at the back of the vessel, with a young Daughter No 1 clinging onto her with grim determination. Mother-in-law Chris was pacing around the lounge, white as a sheet. I had Daughter No 2 with me, no more than a babe in arms and unable to vocalise her distress. Nevertheless, her wriggling and writhing made it plain that she was in severe discomfort. I looked at Mrs A and indicated to the deck door. She just about managed to acknowledge me, whilst choking back her breakfast. Once outside, I managed to find a vacant bulkhead against which to brace ourselves amongst all the other passengers hoping that fresh air would settle their churning stomachs. By then, Daughter No 2 was crying and appeared in pain. I had her head held against my collar bone and with a couple of quick convulsions she threw up over my shoulder, back and trousers. Then immediately fell into an exhausted sleep. I dare not move her for the rest of the trip.

She was still out for the count when we were summoned to the car deck approaching Rosslare. Chris took her from me, stripped her, whipped on a new top and settled her into the car seat. The smelly garments quickly tucked away in a Tesco bag. Daughter No 1 was on the back seat too, apparently none the worse.

I pulled off my soaking, vom-covered t-shirt and trousers, and threw them in the carrier bag. But before I had chance to unearth clean clothes from the boot, Mrs A was revving the engine and making for gang plank. She could not wait to depart that sick boat, elbowing the Zafira into pole departure position. I had just about crawled into the front seat and slammed the door shut before we were negotiating avenues of steel car-deck pillars and shell-shocked passengers. We exited the ship like the Dukes of Hazard jumping a canyon in the General Lee. Well, that’s how it felt, so keen was Mrs A to leave the experience behind.

We drove through the streets of Rosslare with me in the passenger seat trying to protect my modesty with nothing more than a pair of y-fronts and an AA road map.

Unbelievably – I say that, but this was Ireland, so, in fact, totally believably - the weather had broken sunny and warm on the other side of the low-pressure blotch. Taking this as a cue, my supportive family left my semi-naked self stranded in the car whilst they jumped out at a shop to buy and then scoff those ice-creams we missed in Fishguard. They brought me back a Zoom. It was not until their collective hilarity at my predicament had ebbed, somewhere beyond a crawling Waterford traffic jam, that we stopped at a garage so I could retrieve clean clothes from the boot.

The return trip was a bit better and we gave ourselves an opportunity to explore the Pembrokeshire coast from elsewhere than underneath an angry weather system.

Arriving was not without some drama, however. The ferry service was late departing Rosslare and managed to lose more time on the crossing. Not weather related this time. Irritating nonetheless. Darkness had descended by the time we navigated out of Fishguard harbour which meant we had some trouble finding Aberporth. I don’t drive (thereby hang a couple of tales for future posts), so I used to justify my space in the car by providing a tip-top personal navigation service. Think Dave-Dave rather than Tom-Tom. Although Google maps has put paid to my service in recent years, so I’ll have to think of a new way to warrant my designated-drinker passenger status. But in those days, all I had was an OS map and weak illumination from the glove compartment bulb to find our route. A couple of wrong turnings did nothing for the Dave-Dave subscription feedback and led to a good chunk of directional doubt when the village steadfastly kept refusing to appear around the next bend. The place was further up the coast than my glance at the map in the last glow of daylight had suggested.

We were past our arrival time at The Ship Hotel and I guessed too late for dinner. We pulled into the car park and the hotel manager was there to greet us. No words of explanation were necessary. He already knew that the ferry had been delayed and rustled up some plates of hot Spag Bol for us. We ate greedily in the otherwise empty dining room. The Manager, who’s name I can’t remember now (there’s gratitude!), couldn’t have done more.

Next morning was a little less fraught and we pottered about over breakfast, sorting out the girls’ beach bags and then took time to explore the place. Aberporth is only a small village really. It sits on the southern edge of Cardigan Bay in Ceredigion, just beyond the Pembrokeshire national park. For a small village, the place is well-endowed with beaches. Two gorgeous coves sit in Aberporth Bay between the rocky headlands of Trecregyn and Fathgarreg, split by a smaller rocky outcrop. 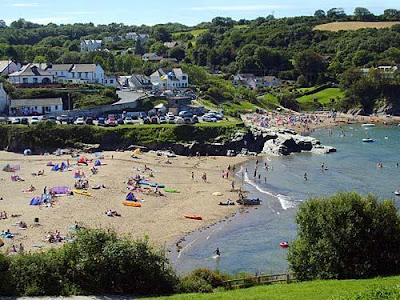 Even though the day was blustery, the fleeting sunshine was enough to encourage families out on to the deeper, more southerly of the two beaches. We picked our way between a gaggle of kids wearing gaudy crocs who were splashing in the surf. Knots of Mums and Dads were already laying out towels and erecting windbreaks. We joined them with our buckets and spades.

Over the outcrop, the other beach was the site of various boat-related activities. Sailing dinghies, kayaks and canoes were being readied by the shore.

There was a tang in the air. The village has its roots in the fishing industry. In the 17th and 18th century Aberporth had a fleet of herring smacks plundering the stocks of Cardigan Bay. Inevitably, the stocks became depleted and fishing declined. There remains some crab and lobster fishing and this was the aroma hanging on the breeze. We could see parked-up tractors on the expansive northerly bay that are used to launch boats.

We ended up chatting to a fisherman who sold his own fish direct to the public and was from the long-standing Davies family of fisherman based in Aberporth. He said that some days, crate after crate of giant spider-crabs are landed on the beach, hauled out of Cardigan Bay. The same fishermen would set off again and again from Aberporth beach and return within two hours with full loads of crabs.

There is something sustainably comforting about the way fishing is done here. Crab and lobster are caught all year round, but Spider Crab are only available from May to August. Our new friend told us that in summer they fished with a handline for Mackerel, Sea Bass and Pollock. In winter, Cardigan Bay Scallops were fished on ground that had been used for forty years. They only sold what is caught locally and even that was dependent on the weather. He said their business was still family owned and run. Most produce was still sold from the house – and the rest from the produce market in St Dogmaels.

On our way home, we retraced a good portion of the previous evening’s trip from Fishguard so that we could enjoy the coast in daylight. I say ‘we’. The girls were fast asleep before we’d hit the River Teifi at Cardigan. We crossed over the river and into St Dogmaels, paying a bit more attention this time. Very pretty, colourful little place. I couldn’t quite pick out the produce market from the road, but I did spot a bit of the ruined abbey. We detoured up the estuary as far as the expansive (but empty) Poppit Sands where dunes and mud flats joined the beach and Pembrokshire cliffs beyond, just inside the national park. We turned south and east for the long journey home. I was pleased simply to be wearing clothes…