Always – no, never – set up an Out Of Office message. Because although it might be good, even required, practice in some quarters, the execution can go horribly wrong. I know. In the Summer of 2015, I managed to send out about a billion or so automated messages. By accident, of course. I’m not really sure how this happened. Something to do with the way I applied the filters, I believe. Even the polite little warning from Apple, saying “Are you sure?” didn’t alert me. About 30 seconds after clicking to activate, I realised that I had sent an e-mail about my holiday plans in reply to every e-mail in my work in-box.

I’d sent an apology text to those that got the most. Brian said ‘”Just the 300-odd!” and Andy said “Don’t worry. Just replying to them all now”.

There were a couple of unexpected consequences. Some colleagues I hadn’t been in touch with for ages replied “I think you’ve got a bug. By the way, why don’t we meet up soon?” One guy replied with some useful advice about employment law that I had originally asked for in 2013. He hadn’t bothered the first time.

Si went “Let’s get some dates sorted for horse racing this Summer.” “Top plan”, I replied “l’ll get on to it after my hols. As you know, I’m away for a while”.

The moral of the story is empty your in box.

I was still sending apologetic electronic missives from the ferry as the northern point of the Isle of Wight’s diamond landform swung into view.

Ferries always evoke a sense of adventure. Even that short hop across The Solent from Portsmouth. Our Wightlink ferry had slid from its berth and passed the maritime city’s latest landmark, the Spinnaker Tower, designed to evoke the image of a flying, wind-full sail. It was a bit leggy for that, I mused, but still very sleek, eye-catching and attractive. And you can never really have enough high-rise viewing platforms in which to enjoy luxurious high tea.

The tower had recently been the subject of a classic British row over its painting scheme. Corporate sponsors Emirates had proposed a red and white design in line with airline’s expensively assembled branding package. Residents of the city went mad. Red and white, of course, are the colours of local football rivals Southampton. Portsmouth play in blue, as if you needed telling. There was a fleet-footed u-turn by the city council in the face of a hostile reaction. The tower was eventually finished in a neat blue and gold top-coat and thousands of unwanted pots of red gloss were given away to local charities…

I was also intrigued to pass the hovercraft berths at Southsea. This was a mode of transport I had casually consigned to the grainy images of Movietone history: a revolution in travel that came and went in the space of a few short decades. But no, it appears that the Hovertravel service to the Isle of Wight is the world's longest running and only remaining commercial hovercraft operator left in Europe.

The Isle of Wight was all crumbly cliffs, sandstone outcrops and curvaceous beaches. We were staying on the outskirts of the laid back village of Bembridge. The sort of place to which our daughters would happily have us packed off and retired. We wouldn’t have been alone. We had recently acquired a family dog. Walking hounds of various sizes and descriptions on the beach below our cottage was the main source of activity in the area. Bembridge was very chilled and I decided I wasn’t quite ready for the sedate life just yet. No matter how soul-filling it was to see our bonkers Tibetan Terrier (mostly) skittering over the wet sand, poking her nose into crab-infested rock pools and running away from frothy tides. 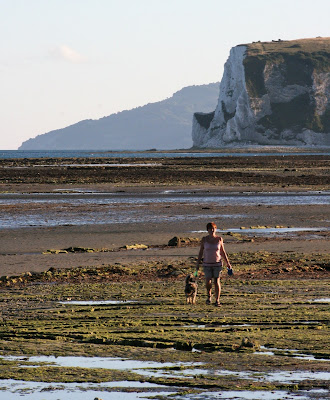 So genteel was our destination that I got up spectacularly early one morning just to photograph my first ever Summer sunrise. 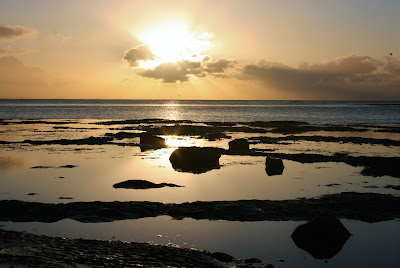 And one evening the four of us were leaning on the fence of our next-door pub beer garden admiring a superb ‘blue’ moonrise over the harbour. 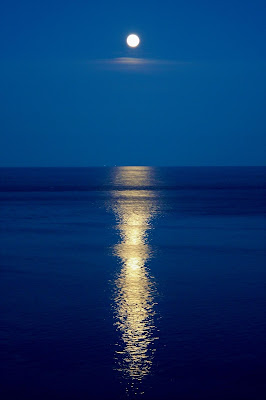 This part of the island was naturally photogenic. As was the other half of the diamond, to be fair. It’s just that there were a few places over there that we wished we had avoided. The Needles Park, for example. It is a disaster area. It is a crime scene. It is a rash outbreak of tack and tasteless crap nestled beneath a breathtaking headland. How this horrific collection of fast food, cheap tat and slow traffic ever managed to evade planning laws to scar the location of one of the most iconic landmarks in Britain defies sense.

We had crawled many miles along single track roads behind hordes of tourist buses to the park. We already feared the worst. If we could have turned round before our arrival we would have done so. The gaudy vista as we descended from the rammed car park was a sufficient jolt to our equilibrium even before the wind had dealt us a stinging slap of that famous multi-coloured sand, precisely funnelled through the parade of unsavoury retail units up from Alum Beach. Events only took a humorous turn for the better when we witnessed a shockingly bad Bob Marley impersonator crank out ‘Jammin’ and ‘Three Little Birds’ at a ferocious wattage whilst eye-catchingly girating his ludicrous belt buckle and single handedly breaking the trajectory of the sand-gale.

I came here once before, many years ago. Then there was a pleasant chair lift down the face of the cliff to the bay. It’s still there. “Let’s see the Needles from the chairlift”, we had said to the girls that morning, “pretty view”. But no. This one modest relic of that innocent, bygone age was closed because of high winds.

The walk up to the batteries on the headland was a perfect antidote. The screaming wind blew away the bad taste. Views of the Needles, across to Lymington Harbour and back to Tennyson Down were as satisfying as they were refreshing. 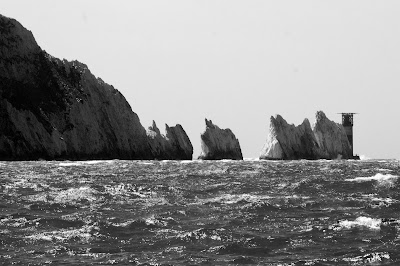 Our fisherman’s cottage, serving as home for the week, was cosy. That’s a metaphor. The lounge-slash-diner was precisely that. One or the other. Never both. Once the table was folded out to facilitate eating, the space was entirely dining room, including elbows overspilling into the galley kitchen and bedrooms.

The table was down quite a lot because we rediscovered some traditional pastimes, like scowling everytime Daughter No 1 ruthlessly trashed our pieces in Ludo. I also taught Mrs A and daughters to play Texas Hold ‘Em. We had matches for poker chips (in time-honoured fashion) and the hand rankings blinked back from the laptop screen perched on the table. Daughter No 2 had the best poker face out of the lot of us. She’ll go far.

Just as well we could gamble, play games and explore. Because access to social media, the 21st century default pastime, was patchy. In Bembridge, despite being promised full coverage from the cottage rental company, wifi was mostly unavailable. Often we resorted to waving devices in the general direction of the next door pub to catch their beams. The cottage owner popped round one afternoon whilst we were out. It’s not clear what he made of the four wooden chairs placed hard up against the fence adjacent to the pub. He moved them back around the lonely picnic table in the centre of the garden and went away.

In fact the Crab & Lobster was a decent boozer. It became our second home, with good hearty food, pleasant aspect that all important wifi signal. There were other second-home boozers too. We took the splendid walk along the bay and up to Culver Down a couple of times during the week. The Culver Haven Inn had a view almost as tasty as its crab sandwiches.

Wight is blessed with some wonderful outlooks. A fact not lost on caravan park providers (again), who had sited the considerable spread of Sandhill Holiday Park in a prominent cliff top location above the sweeping Whitecliff Bay. However, this was the Isle of Wight of course, and the park was really quite pleasant. Modern, tidy chalets with balconies brimming geraniums overlooked by picture-windowed lounges, and all with enough space around them to hint at privacy. Some had little white picket fences, latched gates and patches of artificial grass. I muttered some admiring comment as we skirted the front of the development.

This was the first trip where I had cause to laud what was then the new OS digital mapping offer. From its fantastic phone app, I could download the maps I had purchased and link them to GSI in order to provide an accurate pinpoint of my precise location. …Until the mobile signal dropped out of course. At that point we were stuffed because I’d left the actual, real, physical map at home. Relying on my rigorously honed geographic instincts only cost us a couple of scenic miles or so… The app couldn’t do anything for the dog-unfriendly stiles either. We were reduced to gathering up the hairy beast and bodily lifting her over fences. It could have been worse. She could have been an Irish Wolf Hound. 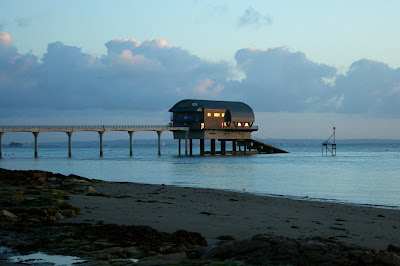 One of our excursions was down the coast through Sandown, Shanklin, Luccombe and on to Ventnor. The sand and shingle beach rising up to the town built into the cliffs of St Boniface Down pulled me right back to family holidays here back in the early 80’s. As kids we were happy splashing about in the sea and wasting money in the few penny-falls arcades. But the town, which gained popularity as a health resort with botanical gardens and boasting a warm micro-climate, was a bit too mannerly for my Mum. She preferred something livelier: perhaps a bit of bingo, a sing-a-long in the pub or maybe an end of the pier show.

No such opportunity in Ventnor. The pier was in poor state of repair by the time of our visit in the 80’s, having been truncated to just 100 feet long, and losing its pavilion and steamer dock in the process. The repair bill steadily rose and had reached about £800,000 by 1992, when the decision was taken to demolish it at a cost of £239,500. Crazy logic.

For my birthday this year, a mate gave me a book called ‘Round Our Coasts’. He knew I was halfway through these leisurely blog posts around marginal Britain and thought the book would be useful context. Not half! Published around 1900 by George Newnes Ltd, it is a collection of photos from just about every seaside resort across these islands. The images are revealing bits of social history, celebrating bathing machines, Edwardian dress and modest seafront developments. The descriptions that accompany them, often provided by town hall clerks, are almost as illuminating in the turn-of-the-century language to advertise the resorts. Ventnor is typical. “Our view shows the esplanade and the pier; at the end of the latter is a commodious pierhead, with a bandstand, where a band performs in summer.” I doubt even that charming image would have been enough to quicken the pulse of my Mother.

Here’s a photo of the pier and bay from Round Our Coasts and next to it, a photo of the same spot now with the new Ventnor harbour having replaced the pier. 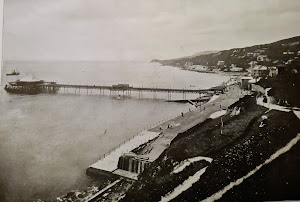 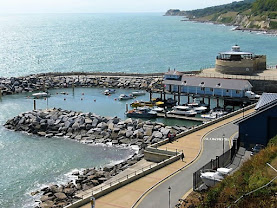