December 04, 2016
I was going to write a new blog about our annual expedition to the Tingle Creek meeting. Then I found that with a little bit of handy, writers-block relieving track-change manipulation, most of last year's effort will suffice. This is the first time I’ve plagiarised my own stuff (as oppose to anyone/everyone else’s) and I’m quite pleased with the initiative.

This meeting has become a fixture in our punting calendar. For years we came on the Friday; a lower-profile card which still has a couple of decent races. Sneaking a day off work was part of the attraction. One time when the fixture was frosted-off we instead went 10-pin bowling at the Trocadero and drank all day.

Since switching to the main event, attendance amongst our unruly gang has grown. Fourteen Sixteen thirsty souls answered Bryn’s group booking invitation this year: thirteen sixteen lads and one lass.

At one point in the week before the meeting, we allowed ourselves to think that an epic Tingle Creek Chase was about to unfold. Willie Mullins had committed to the race the brightest star in the current two-mile division and reigning Arkle hero, Douvan, as well as last year’s Arkle hero, Un De Sceaux. Henderson had also pointed two of his stable stars in the direction of Sandown Park. Scintillating Sprinter Sacre had been nursed back to something approaching his best and another sick note, previous Arkle winner Simonsig was also back to form.

Shame on us for allowing ourselves such high hopes. The increasingly nervous Hendo decided that Sprinter was not yet ready for another bout, citing possible heavy ground (it rode genuine good to soft on the day); and. The unfathomable Mullins revealed that Douvan Sceaux was “not as good a traveller as Un De Sceaux. a little flat in himself the last two days." Bless. On the eve of the race Simonsig was also pulled out with a new injury. Sad to say that neither Sprinter (retired), nor Simonsig (destroyed) lined up this year either, though Sprinter paraded for the crowd and Bacchy took a fantastic picture of the legend.

This all prompted hearty twelve- ten to-follow chat about those numpties who had dropped Vibrato Valtat picked Douvan, some as star horse - and others a couple of weeks previously to bring in the Sprinter who had shamefully made no transfers at all.

We set out from various points of the south east regional compass. Bacchy offered a spread on people left at the entrance without their allotted ticket at 2-3. “Are you a buyer or a seller?” he asked. Another potential wrinkle was the mayhem caused by crap trains across the entire south west London region, meaning Bryn, Nick, Ad and Pete missed the first; and Bacchy resorted working out his placepot on the phone. An impossible task. I imagine he ended up with the default fav in every race. A further potential trap was  the number of punters who copped a penalty fare at the track-side exit form Esher station. It is beyond zone 6 and the ruthless Southern Railway enforcers set up camp just off the ramp to pounce on hapless incorrectly-ticketed punters. Bryn was alive to this, though and had warned about their tactics in his final briefing to us all. Top admin. Give that man a finance job. Thankfully, the rail enforcers were having a day off. Maybe it was their Christmas party. Or maybe they didn’t fancy the wrath of thousands of punters made late by their useless services.

Bryn’s expert planning was rewarded with the arrival of the Gang Of FourSix(teen), bearing shiny, happy, optimistic faces within a few moments of the appointed hour at all sorts of random times both before and during racing. The first concern was the lack of real ale. “Where’s the Hogsback stall?” said virtually everyone. Even the lager drinkers.  Turned out they’d been booted out of the grandstand (just like last year) into the farthest reaches of the car park enclosure for refusing to pay inflated concession fees.  In the meantime, Nick found a the real ale bar underneath the Esher Stand in the family area just adjacent to kids’ pantomime stage had also gone. Instead, the Christmas market had grown exponentially, spreading its gaudy stalls of gingerbread animals, German tree decorations and smelly candles into every nook and cranny. They don’t make it easy for the beer drinkers. Top work that man.

Fuelled by ale and increasingly animated banter, the actual racing part of the day disappeared in a rising miasma of punts, horses and pees. I do remember one or two highlights:

-       Gary found five three winners from seven races. Outstanding. He backed Li’l Rockerfeller because it was similar to his Mother-in-Law’s cat’s name. Or some such. Danny, on the other hand, brought his Sandown record to 0/12 across two years.
-       Bacchy We all proclaimed me a the genius for of finding locating some bogs with no queues over by the parade ring Hogsback Bar. A sign of the relative priorities amongst men of a certain age.
-       Nev not landing any forecasts. At all. (Unless I missed them)
-       A big No surprise in the Henry VIII novice chase as Gary Moore’s Ar Mad Nicky Henderson’s Altior won at 14-1 a canter in a six four runner field. No-one backed him in our gang, despite Moore running up six winners across the two-day meeting the class of the beast. The odds of 2/7 rightly proved too prohibitive, even for Bryn.
-       Everyone ignored my winning nap on Simply A Legend in the handicap hurdle bad tempered bleating about backing a brace of fast-finishing seconds in the opening two handicaps and then me ignoring everyone else’s nap of Carole’s Destrier who took the last tried to get in on my act when Tim instigated an impromtu Smug Punting book signing. All that was missing was the trestle table and a stack of books...
-       Some saucy action away from SW London saw Colin tip a 33-1 runner up Bacchy get his 20/1 shot Highland Lodge at Aintree chinned by a canny ride by Tom Scudamore up his inside; and me back a spawny 6/1 winner at Chepstow (my solitary success all day). Bacchy expecting to land a cheeky treble at Navan only to find it had been abandoned, despite the bookies taking his bet. 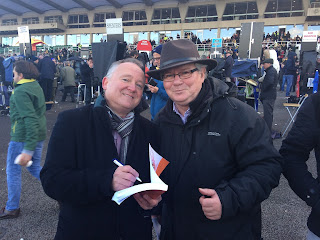 The most controversial sublime moment was easily Special Tiara getting stopped in his tracks by Sire De Grugy in the finish to the Tingle Creek. The enquiry went on forever. There’s something wrong somewhere when the common consent at the track was that Special Tiara would have won the race but that the stewards would never reverse the decision. Colin noted the transformation of Darren during this moment, discarding his 'Happy Days' banter in favour of apoplectic rage when SDG kept the race. "Even if his jockey had've shot my fuckin' jockey, he still wouldn't have been fuckin’ disqualified! Fuckin’ fix!"  Un De Sceaux held on from a rejuvenated, heart-on-his-sleeve Sire De Grugy, with God’s Own fair screamimg up the rail and Ar Mad suddenly back in contention after looking well beaten. That’s the order in which they passed the post, but for the last couple of furlongs, the bellowing coming from our party betrayed the closeness and brilliance of the finish. Un De Sceaux made a howler at the last and for a moment Grugy had his noble head in front. UDS pulled out a little more to repel all comers. SDG held God’s Own for second by a neck. Proper racing. The best Grade 1 race I’ve seen all season.

Dark days at Sandown. By 3.45pm the lights were on and we groped our way to the station. By 4.15pm we had commandeered a corner of a cosy pub in Surbiton.

Colin pulled out after one a couple of pints and a half-hearted offering up of round of full blooded his belly for a raspberry blows. Gary exhorted him to stay, “Go on, just one. A half. A short. A coke. A bag of crisps?" Nick was next. The hipflask had been drained and he ran up the white flag by texting Den to come and pick him up. ‘s mate Jamie, new to the races, was swiftly initiated into this bewildering ceremony. 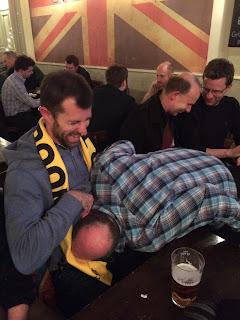 After a few more beers, there was an overwhelming need to find a curry house. Things fractured a bit at this point. I remember getting a train to Wimbledon and standing outside a shut down restaurant as if our very presence would spark it back into life. We were then turned away from another because it was full. The group splintered again and I then went home to slake my curry obsession with a take-away from emporium just down the road.

A whole new world of recycled blogging has just opened up. Given our predictable behaviour, I may well write next year’s Tingle Creek meeting right now.