December 13, 2015
This meeting has become a fixture in our punting calendar. For years we came on the Friday; a lower-profile card which still has a couple of decent races. Sneaking a day off work was part of the attraction. One time when the fixture was frosted-ff we simply played 10-pin bowling at the Trocadero and drank all day.

Since switching to the main event, attendance amongst our unruly gang has grown. Fourteen thirsty souls answered Bryn’s group booking invitation this year: thirteen lads and one lass.

At one point in the week before the meeting, we allowed ourselves to think that an epic Tingle Creek Chase was about to unfold. Willie Mullins had committed to the race the brightest star in the current two-mile division and reigning Arkle hero, Un De Sceaux. Henderson had also pointed two of his stable stars in the direction of Sandown Park. Scintillating Sprinter Sacre had been nursed back to something approaching his best and another sick note, previous Arkle winner Simonsig was also back to form.

Shame on us for allowing ourselves such high hopes. The increasingly nervous Hendo decided that Sprinter was not yet ready for another bout, citing possible heavy ground (it rode genuine good to soft on the day); and the unfathomable Mullins revealed that Sceaux was “a little flat in himself the last two days." Bless. On the eve of the race Simonsig was also pulled out with a new injury.

We set out from various points of the south east regional compass. Bacchy offered a spread on people left at the entrance without their allotted ticket at 2-3. “Are you a buyer or a seller?” he asked. Another potential wrinkle was the number of punters who copped a penalty fare at the track-side exit form Esher station. It is beyond zone 6 and the ruthless Southern Railway enforcers set up camp just off the ramp to pounce on hapless incorrectly-ticketed punters. Bryn was alive to this, though and had warned about their tactics in his final briefing to us all. Top admin. Give that man a finance job.

Last year, I met Tim at Watford and he was picking out winners for that evening’s Wolverhamtpon card. I ignored it. This year was worse. “My cousin is sending a horse box over from Ireland for Monday’s Musselburgh meeting.” I rolled my eyes. “One of them will win, if not two”, he said with no little authority.

Bryn’s expert planning was rewarded with the arrival of the Gang Of Four(teen), bearing shiny, happy, optimistic faces within a few moments of the appointed hour. The first concern was the lack of real ale. “Where’s the Hogsback stall?” said virtually everyone. Even the lager drinkers.  Turned out they’d been booted out of the grandstand into the farthest reaches of the car park enclosure for refusing to pay inflated concession fees.  In the meantime, Nick found a real ale bar underneath the Esher Stand in the family area just adjacent to kids’ pantomime stage. They don’t make it easy for the beer drinkers. Top work that man. 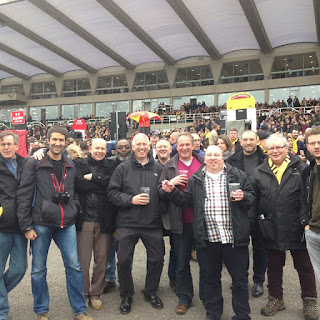 Fuelled by ale and increasingly animated banter, the actual racing part of the day disappeared in a rising miasma of punts, horses and pees. I do remember one or two highlights:


The most controversial moment was easily Special Tiara getting stopped in his tracks by Sire De Grugy. in the Tingle Creek. The enquiry went on forever. There’s something wrong somewhere when the common consent at the track was that Special Tiara would have won the race but that the stewards would never reverse the decision. Colin noted the transformation of Darren during this moment, discarding his 'Happy Days' banter in favour of apoplectic rage when SDG kept the race. "Even if his jockey had've shot my fuckin' jockey, he still wouldn't have been fuckin’ disqualified! Fuckin’ fix!".

Dark days at Sandown. By 3.45pm the lights were on and we groped our way to the station. By 4.15pm we had commandeered a corner of a cosy pub in Surbiton.

Colin pulled out after one pint and a half-hearted offering up of his belly for a raspberry blow. Gary exhorted him to stay, “Go on, just one. A half. A short. A coke. A bag of crisps?" Nick was next. The hipflask had been drained and he ran up the white flag by texting Den to come and pick him up. 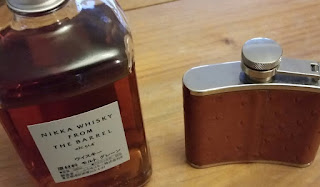 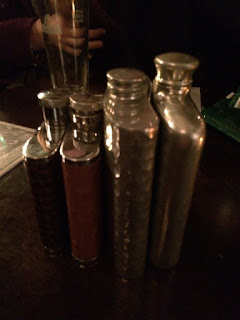 For some reason, Bacchy and I felt the need to escort him from the pub. Den was in the station car park surrounded by honking taxis. Nick scrambled in to the passenger seat and Bacchy leant in to Den through the open driver’s window, elbows on the frame offering wise words about getting Nick home safely. Den looked like a rabbit trapped in the headlights.

Back in the pub, Bacchy tipped his head back, extended his arm upwards and threw hipflask remnants straight down his throat. An adjacent barman looked on with incredulity but didn’t say a word. Time to go. I was almost persuaded to go to Wimbledon for a curry, but thought better of it. I was stood on the wrong platform at Surbiton and must have looked like thunder as I rejoined the gang on the right platform. “Here he comes”, said Bacchy, “the Grinch!”

There was the odd hangover from Saturday’s adventures: one missed twelve-to-follow transfer; one missed gig ticket purchase; and one winner from Tim’s work on the train down - Moonlone Lane from the Irish raiding party went in at Musselburgh on Monday afternoon by 3 lengths. This time I listened.

Stories of earlier Tingle Creek encounters and other meetings can be found in the newly published collection ‘Smug Punting – More short tales about long odds’.