November 30, 2015
Mug Punting got off to a pretty low-key start this jumps season. Even a trip to Cheltenham’s first day of the season couldn’t induce a winning thread. Me, Dad and Bruv pitched up on the first day that an impressive new £45m five-storey grandstand was open for business. The whole redevelopment looked good: a new parade ring and winners enclosure, balconies, viewing areas and high level walkways. 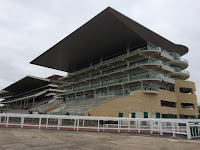 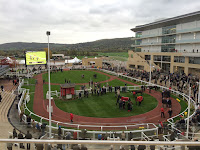 We grabbed a table on the first floor next to the champagne bar and gathered from staff that plebs like us would not be allowed in here in future. When the stand opened formally from the next meeting, this would be badge holders only. This was the soft launch designed to test operational wrinkles like queues for the bogs and crushes at the exits. (Wouldn’t want to see the members used as such guinea pigs...) Still, the development is a significant improvement on the old owners and trainers enclosure that used to occupy the site. 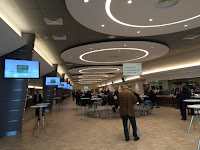 Much more spick and span than my punting. I didn’t sniff a winner all afternoon.  Dad and Bruv didn’t do a whole lot better. The best I could do was to take away a couple of hurdlers and pop them in the notebook: Mister Miyagi, a Dan Skelton novice and Old Guard a vastly improved Nicholls’ handicapper who had first shown his abilities in juvenile events the previous season.

So come the next meeting at HQ, when the new stand had been opened as The Princess Royal Stand by the 12th in line to the throne, I managed to let Old Guard go off unbacked at 12-1 to win the Greatwood Hurdle. Bollocks.

The rest of the Open meeting card was a bit better as a punting exercise. I’ve followed Sausalito Sunrise for three seasons now, extracting a reasonable profit from this unflashy stayer along the way. His grinding win in the 3m3f handicap chase etched his figures further into the black at 7-1. My best bet of the weekend. I thought I had the winner of the Paddy Power, too. Irish Cavalier was tanking and looking like he had the race at his mercy. Until he folded at the top of the hill.

It was the best few days of racing I’d seen in a good long while. Nichols Canyon beating a rusty Faugheen at Punchestown was dramatic stuff. Sizing John and Bellshill laying down markers in the novice divisions across the Irish Sea was intriguing. And then the stunning return to form of Sprinter Sacre. For the first time in his illustrious career, I managed to find a winning bet on him. Always eschewing the odds-on prices in his glory years, my only other bet was his 3rd in the Supreme of 2011. Even here I prevaricated over the 2-1 almost too long. Great to have him back. As Lydia Hyslop remarked in her Sporting Life column, it’s amazing what a little bit of vulnerability does for a horse’s popularity. This is an emotional game. Disappointing then, but hardly surprising, that Henderson has subsequently taken the cautious route and will not be running Sprinter at the Tingle Creek on Saturday.

The season is taking on a retro flavour. Add to Sprinter Sacre’s return the re-emergence of Sir Des Champs, Bobs Worth and Simonsig after long lay-offs and it could be the year of the come-back kings. I’m keeping up my hopes for 1D.

So Cue Card, take a bow. I’ve been wrong about this horse too many times. I was ready to write him off again in the Betfair Chase. Instead I chose to believe Tizzard and my mate Col about the epiglottis fix. I took a punt based on his Charlie Hall Chase win (and make no apologies for this apparent aftertiming). Cue Card was brilliant. At the point down the back straight where Silviniaco Conti out jumped Cue Card, the latter might once have folded. Given a moment to recover by the imperious Paddy Brennan, he was soon back on the steel and up to Conti’s girths before running away with the race.

My mate Col also tells me that the benefit of these throat ops often doesn’t last long. I hope they get him to the King George in one piece, because that is shaping up to be a superb renewal. Silviniaco Conti will be back, blinkered for the first time at his favourite track. Vautour, after his satisfactory return, will come on a bomb and Ruby insists the right-hand jumping is not a problem, merely a quirk of the alignment of the fences at Ascot. Throw in the top-rated Don Cossack, Gold Cup champ Coneygree and a few others like Saphir Du Rheu and Ptit Zig, and we are in business.

Unlike the class of 2013 who are burning up the come-back trail, Rock On Ruby never went away. He just kept on winning. Sadly, he picked up an injury after claiming a tenacious victory in an Ascot Grade 2 and has been retired. Happy dotage, old son. Doesn’t owe me a penny. The 2012 Champion Hurdle victory will live long in the memory.

I’ve got a half decent record in the Hennessy. I backed Many Clouds last year when I was at Twickenham watching England beat Australia in an Autumn International. What a difference a year makes. This November, England are nursing a premature World Cup exit hangover and I was playing golf in a screaming wind whilst my bet Ned Stark got tailed off at Newbury.

I was on the wrong Alan King horse. I was mostly on the wrong fairways too. Nothing went straight, or very far. My putting was solid enough. Comparatively speaking. If only I hadn’t taken eight shots to get on the greens. Nick was not much better. His vicious slice kept him in the undergrowth for most of the afternoon. The very same undergrowth, as well as fairways and greens (and other obscure parts of the course my balls had visited) that were about to be ripped up to make way for a new housing estate. The course was closing the very next day, having succumbed to the owner’s smell of development money.

Smad Place was quite brilliant. Bold, flouncy jumping and electric front-running. He’s probably had a performance like that in him for some while, having never quite put it all together at the right time/weight/conditions before. Fair play. My other bets took a pounding too. Top Notch was the best of ‘em in the Fighting Fifth. Even watching the replay later, knowing the result, I thought he was going to hang on.

These tribulations were nothing compared to those of sharp-quiffed young fellah-me-lad in my office. On Monday morning he was telling me about his fourfold football combi (he no longer accepts any of my racing tips): Brighton, Man City, Middlesbrough and Everton all to win. All four results were lining up the right way. Over at Goodison, the Toffees had a comfortable 2-0 advantage. Then a brace of Bournemouth goals in the last 10 minutes brought the scores level. Fellah-me-lad was downcast, cursing his luck. However an injury time goal for Barkley had him waving his three-parts empty pint of Stella around in the boozer and counting out his virtual three-figure payout. Only for Stanislas to equalise with the very last kick of the game, taking the acca down without a trace. Cruel.

It will be the same or similar for 14 of us this Saturday, no doubt. The boys (and one girl) are assembling for the annual onslaught at the mighty Tingle Creek meeting. Sprinter Sacre or no, it will be a memorable day. At least, until the early beers and empty hipflasks take their toll. From that point on a forgettable day might be more appropriate.