A tale of two piers

November 07, 2015
Well, two and a half piers, really. Because I was to be found lurking outside a concrete bunker opposite Brighton's ruined West Pier at one point of this tale, haranguing strangers on a damp Halloween evening.


You may well ask why this was happening when I could easily have been lapping up an insanely brilliant collection of Weekend sport in comfort at home. The answer has something to do with a misjudgement about the pulling power of a rock ‘n’ roll dream ticket.

Joe Bonamassa, one of the few truly inspiring guitarists left on my to-see list had announced an arena tour. Surprisingly all the dates missed out London. Inexplicably, they also bypassed Aylesbury Watford and even the decent blues pub in Sarrat. Brighton was on the list though. And I knew tickets would sell fast for this blistering fret-meister. So one Monday morning I was to crouching over the laptop, credit card in hand, waiting for the tickets to go on sale. Hardly a Glastonbury-scale operation, granted. Nevertheless, I was determined not to miss out again after failing to catch the man on at least three previous visits.

My promptness was rewarded. Two tickets were purchased for the Saturday night, although my eagerness didn't yield anything better than seats up in the south balcony. Some birds were significantly earlier than me.

"Fancy a weekend in Brighton?" I smugly teased Mrs A. "Maybe." she replied. Was that a hint of a wink? "What are you offering?" When I gushed my plan: the finest blues-rock guitarist of our generation live and personal for a 2 ½ aural treat, and all night scrabble (amongst other options) in a bijou little hotel overlooking the front, she seemed a fraction underwhelmed.

"Maybe" became "maybe not". Joe B and the boys were not universally regarded as a hot ticket, it seemed. (It couldn't have been any other part of the offer, surely?) More importantly, I'd also failed to register that the date was Halloween. A big night for the girls in the Atkinson household. It became clear that Mrs A would not/could not join me.

So that’s why I was skulking outside the Brighton Centre, doing my best stubbly-chinned, roll-up smoking, stained-mac wearing ticket tout impression. I'd previously tried to flog the spare voucher on one of those reselling websites that are nothing more than industry-sponsored mark-up outlets. Despite the gig having been sold out for weeks, mine would not shift on the net. I had no joy trying to hawk the ticket outside the gig either.  I hung around the box office a little while and then simply handed it back to them and asked that they gave it to anyone who turned up last minute. Life really is too short to be flogging tickets on Brighton front in the gathering mist. I've had enough free gigs over the years. I don’t begrudge paying double for this one. And anyway, I had some illuminated seaside attractions to photograph.

The seat next to me in the balcony was empty all night, so I guess no-one claimed the ticket. During some of the many exquisite moments when Bonamassa was writhing over his axe like a dementer, faced screwed up like a pug's, I glanced at the vacant seat and thought it was just as well Mrs A was not there. She would have seen those extended passages of sublime lead guitar as nothing more than overwrought grandstanding. To me, Bonamassa is a genius. His sharp suit, slick hair and shaded eyes belie the passion and feeling he wrings from his instrument. Nobody chucks such a high-spec ceramic kitchen sink at every solo like this upstate New Yorker. He means every plaintive, gutteral, pure, sweet, brutal note he picks out.
Walking back up South Street was a visual treat. The hen party/stag scenario that takes over Brighton at weekends was in full swing and the bottom of South Street was mayhem. It wasn’t just the gangs of nurses, tarts, vicars, and Elvises that forced me into the road. Their number had been swollen exponentially by Halloween revellers. I later read that Halloween had just become the second most lucrative festival in the calendar, behind Christmas. The sale of pumpkins, costumes, sweets, cakes and decorations has eclipsed Easter, Valentines Day and Mother’s Day in terms of the revenue it generates. I think at least 75% of those fancy dress sales were collected in a thin strip of the south coast that night. I battled towards the station past zombies, Freddie Krugers even the odd Grim Reaper. More inexplicable were the Minion, shark and rubbish bin outfits. Bizarre.

I'd decided to stay in genteel Eastbourne overnight, rather than schlep back to Hertfordshire. Strolling to the hotel along seafront parade was like a timeshift experience. Surely, a completely different temporal zone to the manic scenes 25 miles down the coast.

I awoke to a sunlight streaming though my sea view window and, downstairs, to a generous fry up in the conservatory. The breakfast room was about half full. There was a disproportionate number of pensioners on sneaky weekends away, and couples minding geriatric parents. A vision of the future...

Eastbourne pier is less gaudy than its Brighton neighbour. And probably more photogenic. On that balmy November morning that felt more like August, I strolled on the prom and drank more cappuccinos that is strictly good for one. 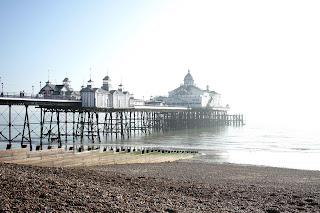 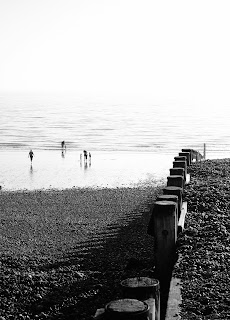 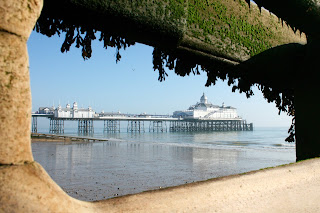 I caught the Number 12A bus from the pier back to Brighton over Beachy Head, through the Birling Gap and past the Seven Sisters. I’d forgotten how beautiful it was down there. In the quieter moments around Saltdean and Rottingdean, I appraised myself of the betting carnage across that special weekend of sport: losers in the Charlie Hall Chase, The West Yorkshire Hurdle, the Sodexo Gold Cup; and in at least half-a-dozen Breeders Cup races. My one remaining Rugby World Cup bet had gone down too. The Wallabies eclipsed in a superb final, apparently, by the best team the game has ever seen. The All Blacks at the peak of their powers.

And then Brighton pier hove in to view. The London to Brighton vintage car rally was in full swing. Glorious Autumn sunshine was glinting off carefully polished paintwork and chrome radiator caps. With a final glance over the seafront and Bonamassa’s ‘Oh Beautiful’ ringing around my soggy brain, I headed for home.