Punting has been at a very low ebb so far this Summer. Too much other stuff going on just now. Not all of it very nice. But in an effort to refocus my priorities I’ve just bought some tickets for a fixture at Newmarket’s July course. A very fine course. So much softer and fuzzy that the exposed Rowley Mile. 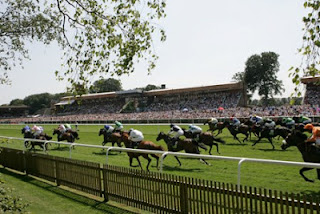 Although it may not feel that way once McFly hit the stage. Yes, it’s another racing/music combo. My all too obvious plan is to engender some love of horse racing in my girls by bribing them with an act they might like. Last year it was Jessie J at Sandown and the year before it was Ollie Murs. Daughter No 1 is particularly pleased with the McFly offering. I was cheered and said,

“That was Busted, Dad”, she retorted. “But they are similar I suppose.”

Patronised by my children. Again. 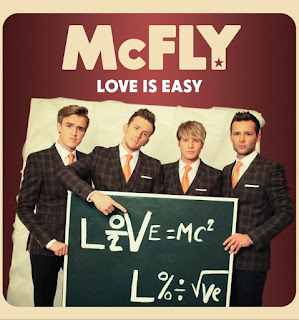 I was reminded of the first racing/music event I went to a few years ago, when the idea was innovative and fresh.

My mate Nick was to blame. Nick and a school summer fair. Such events tend to follow a tried and tested formula: parents donate wine, beer, food, chocolates and toileteries to the school and then pay exorbitant raffle ticket prices to win them back. They help their offspring create variations of throw/guess/dip games to win sweets/stickers/cakes. If they are lucky, amongst the tat, broken toy and home-made gift stalls, parents will stumble upon a bar and a hot-dog stand. This isn’t criticism. School associations need to raise cash and parents rise to their responsibilities with a mixture of resigned stoicism and secret pleasure.

Nick pitched up at just such an event to support his son’s school during the boiling summer of 2004. Amongst the ‘find the lolly in the frogspawn’ tables and the ‘guess the combined weight of the teaching assistants’ games, Nick spotted a stall proclaiming a silent auction. A quick shuftie at the prize list sent Nick’s eyebrows into overdrive: hidden between the cut and blow dry at Mario’s and a family meal at Wong Kei’s was a very plainly stated voucher for two in the Queens Stand at any weekday evening meeting at Epsom Downs. Nick’s inquisitive looks prompted a conversation with the stall minder.

He checked, just to be clear. It was confirmed that the prize was neither an evening of salt related medicinal pleasures nor a free pillow stuffing service offered by a misleadingly monickered dry cleaners. Indeed someone on the parent’s committee was in fact well-connected at the track. The tickets had generously been blagged as a school fundraising opportunity.

So Nick enthusiastically scribbled his bid on the proffered slip and carefully placed it in an envelope. Whether he furtively snuck glances to either side before sealing went unrecorded. The rules were simple: the highest blind bid won each of the prizes. After some lubrication in the beer tent and, clearly some mulling of the options, Nick returned to the silent auction table and engaged the host in conversation again. Nick pondered out loud his view that he might submit another, slightly higher bid for the racing tickets. Yes, this was a silent auction….but not necessarily uncommunicative. Some well-placed body language intimated that another bid might now be necessary; and as Nick’s pen hovered over a figure on the paper, a quick exchange of glances and a barely perceptible shimmy of the hand suggested that a fractionally higher value might just do the job.

And sure enough, half an hour later, our hero was pronounced the winner of the auction, having secured the pair of tickets for the princely sum of £20!

A couple of days later, Nick and I were having a conversation about this unmitigated success in the pub. I was roaring with laughter! What a coup. Top price tickets for the best end at the home of the Derby cost easily 50 notes each. As the conversation unfolded, Nick set out the range of dates available to him.

“So anyway, Den doesn’t fancy going, so if you can manage one of the fixtures, do you fancy a ticket?”

“Do I?” I yelped, close to the top of my register.

“Ahem. Do I?” I repeated, with a fraction more considered baritone. “No, come on. Den must want this, I couldn’t possibly…”

“Look, I’ll check again, but she’s really not that bothered. And have you seen the new promotion they’ve brought in? Rock and racing! There’s gigs after some of the fixtures.”

We had a look at the flyer. Status Quo were booked for one of the July meetings. That was too much. It would be rude not to.

So on a balmy late Summer’s afternoon we bunked off work early and landed at Tattenham Corner attired in the appropriate smart casual. As we approached the turnstiles for the Queen’s Stand my mind rolled back to my first visit here on Oaks Day a couple of years before when we were waved away from that entrance by a snooty red-coated steward who scoffed at our tickets and sent us across the car park to the cheap seats. Not today, I thought, before I chucked Nick a side long look.

“Is this where you tell me it’s a windup?”

No alarms though. We gained admission with a polite welcome and were soon knocking back pints of guiness in the Mezzanine bar, checking out the view down the track from the outside balcony.

To be honest, the racing was fairly average fodder. There were a couple of interesting maiden events and a handicap or so to get stuck into. But that was hardly the point of this delicious jolly on such a gorgeous evening. We did actually have a couple of short-priced winners each to keep the sense of righteousness intact. Though I was aggrieved to see that a few Quo fans had breached the security to blatantly flaunt their patchwork denim jackets in our stand. I briefly considered dobbing them in, but that would be churlish. How easily I am seduced by my own false status (quo). 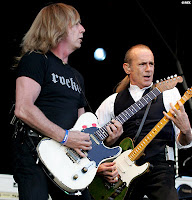 The seasoned rockers were comfortably entertaining. I had seen them on two occasions previously. Both times I had gone to see someone else. The first experience was at Knebworth when the majestic Queen were in full cry on the Live Magic tour. Quo were supporting. The next time was at the NEC in Birmingham where one of my favourite bands, classic Brit rockers Waysted were filling the undercard for Rossi’s lads. Waysted’s riff-heavy, balls out, hard rocking sound echoed around the third-full hanger of a venue and bounced off plastic bucket seats before crawling, shell-shocked and broken, into the indifferent ears of the Quo army supping gassy lager in the bars.

At Epsom, however, I had no divided loyalties. The band ripped through back-catalogue crowd-pleasers like the 80’s never happened. Even though these perpetual boogie merchants churned out big selling albums every 18 months or so, the most recent track they played was a solitary cut from 1988, ‘Burning Bridges’. Apart from that it was unadulterated 25 year-old three chord boogie pumped out with cheeky charm and easy confidence.

Our self-congratulatory mood in the Tattenham Corner boozer over a couple pints of IPA was soon burst. We were in understandably good spirits: a couple of winners, a top gig and bargain-bagging in the name of charity to boot. Winners all round. Until we tried to get home, at least.

We had missed the last train back to town. It didn’t feel that late. Indeed, by central London standards, it wasn’t. I hadn’t event thought to check. But the timetable couldn’t have been clearer. We stood around scratching our heads and squinting at the information boards as if prolonged staring would change its contents. Just then, a Southern Railways eight-car train pulled in. We breathed a sigh of relief and hopped on. The guard clocked us as he walked from the cab to the exit and stuck his head into the carriage.

“You’ll have a long wait there lads. This one doesn’t pull out until 6.05 tomorrow morning”.

He waited for us to haul our reluctant asses off the train before chuckling and manually closing the doors behind us.

We made a few inquiries. The mini-cab office was long closed. The nearest alternative station in Epsom proper was a 45 minute walk - and no guarantee of trains from there by then. The weekly bus had departed days ago….. Nick concluded there was only one option.

“Well do you want to walk to Epsom? And than have to cab it from there anyway?”

I relented. Nick found a public phone box (mobiles were pretty common by then, but far from indispensible - neither of us had brought ours), one of the few public services still available in this leafy part of Surrey at that hour. I didn’t hear the conversation, but there was a lot of shrugging shoulder action and holding upwards of palms in supplication.

“She’s on her way”, he said, poking his head out of the booth.

“I don’t think Mrs A would have come”.

Den turned up a while later, the two children fast asleep in the back seats. She’d had to wake them up and pile them into the Mondeo before setting off on the rescue mission. To assuage my guilt I sat in the front seat, telling Den how sorry we were and regaling her with stories of the night. I don’t think it helped.

Nick was cuddling his kids in the back. At Worcester Park I jumped out and checked my trains. As expected, the last one had gone and I was to be the guest of Nick and Den for the night. I climbed back into the car.

“No joy. But the kebab shop over there is still open…”

I felt, rather than saw, Nick’s grimace.

Den shot the car shot forward and we spat gravel, leaving the kebab shop well in our wake. I could just about detect the aroma of doner meat competing with the thick stench of burning rubber. A request too far maybe. I rang Mrs A from Nick and Den’s.


“You're bloody lucky”, she declared. “I wouldn’t have come for you!”