As my attention over the last few days has turned fully to the Cheltenham Festival, I found myself in need of some backbone.

Odd really, because I’ve just solidified the logistical aspects of my assault on the Championships. Three days at the course this year in company with a select top-slicing of the lads: Nev, Colin and, long shot, maybe even Bacchy at the Champion Hurdle, Champion Chase and World Hurdle days. And a treat this year, on the middle night I’ll be staying over in Cheltenham after racing to soak up the atmosphere at the thumping heart of that glorious happening. Then Gold Cup Day in the Barley Mow with the rest of the gang: a burgeoning crowd of merry-makers increasing year-on-year at a rate George Osborne would sell his soul for. If it hadn’t already been hawked it off to the banking sector in the halcyon days of Opposition, that is. And this week, they are demanding a refund…

With the campaign mapped out, I should have been clear of vision and light of step, ready to bear down in the weeks that remain on the big prizes. And at that crucial moment, I recognised that confidence was leaching away like David Pipe’s hopes for Grand Crus. The dreaded long run of losers had me in its icy grip. Paralysed and dispirited I had begun to question my judgement as outsiders were tailed off and warm favourites went cold. The 40 to follow stable, so often a barometer, was properly in profit to December and peaked at +26 points on 5th January. It has since bombed with 1 win from 15 runs (including the farcical Ambion Wood episode at Wincanton at the end of the month). The yips made me look at ante-posts built around this barn and fret about their shakiness. Victor Chandler’s free bet offer for no-shows was only some comfort. This lot could well turn up only to lose. Who will refund that?

It’s all about context though. Before I felt too sorry for myself, on Monday I saw Darlan cruise up to the leaders in a decent Champion Hurdle trial, dive at the last obstacle, flip over and break his neck. He was most likely on the way to a win that would have put him into a share of favouritism for the big one. This was only his 8th run over hurdles. How quickly careers are made and broken.

I watched the race, hastily arranged and with great credit by the course and the BHB in a poky William Hill near Euston. I’ve been there maybe five times in two months. On each visit, an old Polish guy, tidily dressed and groomed, has occupied a plastic bucket seat in front of the big screen. He’s there when I arrive and there when I leave, whatever the post-time of the race I’ve pitched up to see. He bets on every horse and greyhound race. I’ve never seen him have a winner. Each time he loses, he reels with pain and mutters an unbroken stream of expletives. “Fucking vanker. What you fucking do that you vanker? Fuck. Fucking vanker. I can’t believe you fucking vanker. Vanker.” And then picks up a slip and scribbles out the name of the next loser.

When Darlan fell there was a cry of anguish from everyone in the bookies, quite full for a Monday. Thankfully the cameras did not linger on the stricken horse, but as Rock On Ruby pulled away from the hurdle there was a sickening glimpse of Darlan’s twitching legs. I’ve seen this before and knew instantly that the horse would not survive. The Pole jumped up with his arms in the air. Another bloke in front of me did the same and barked to the Pole “I said, didn’t I? I said the only way he’d get beat was if he fell. I said that. Why is it always the last?” He was distraught. The Polish guy was the same. “Vanker. Fucking vanker! This is not fucking fence. Is fucking matchsticks. Fucking matchsticks. Fucking vanker!” Just another loser for Lech. But much more than that for Nicky Henderson who gave a tear-stained interview soon after the event. Much more for AP McCoy who has suffered this plenty, not least Valiramix who died with the Champion Hurdle itself at his mercy in 2002. And much more for owner JP McManus who lost his Gold Cup winner in the Grand National only last April.

Wobbly bits on the road to Cheltenham. We all get them. Some are a bit more serious than others. 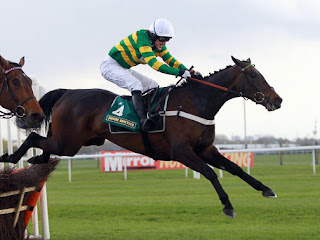