It came as no surprise that the furious horse meat scandal should sooner or later engulf the humble kebab shop. Long the butt of jokes about the quality and identity of their meat, it turns out that some may have received 100% horse meat - labelled as beef or lamb - from a UK slaughterhouse and meat factory. Nevertheless, I remain a staunch defender of the king of the high street takeaways. Horse meat is far from the worst ingredient to be found in take away food. 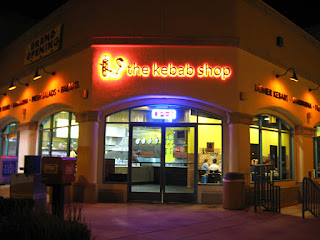 My favourite  kebab house, 'The Bella Doner’ is only two minutes stagger from the tube, but it is on a side-street, and food snobs and vegetarians never seem to find their way there, even on Saturday nights.

Its customers, though fairly eclectic, are mostly 'regulars' who indulge in the same savoury treat every visit and go there for the quality as much as the convenience.

If you are asked why you favour a particular kebab house, it is often the shish that is mentioned first, but the thing that most appears to me about 'The Bella Doner’ is that giant spit of dripping roasted meat itself, or what people often call the 'elephants foot’, amongst other less charitable names.

The whole architecture and fittings of this kebab house are uncompromisingly practical. It has no grained woodwork, ornamental mirrors, subdued lighting or sham Michelin-ia. On the contrary, it has glass fronted counters, formica tables, plastic panels and other modern simplicities.  The stained floors, the chipped chiller-cabinets, the neon fly-electrocutor, the peeling ceiling stained dark yellow by griddle-smoke, the stuffed pickle jar on the fridge. Everything has the transient functionality of the late twentieth century.

In winter there is generally a fierce heat coming from at least two of the grills, and the corner shop lay-out of the place means you don’t have to queue outside should there be other customers. On the illuminated price list there are doner kebabs, shish kebabs, shami kebab, burgers, deep-fried chicken, ‘extras’ and humus for those too bashful to risk eating kebab meat in public.

There may be a video game machine tucked away in the corner, but it is on low volume so doesn’t disturb the general ambience of the place.

In 'The Bella Doner ' it is usually quiet enough for conversation, but no more than pleasant small talk. Instead, you watch the telly in the corner showing an obscure game-show. Even on late nights and such occasions the chatting that happens is of a decorous kind.

The shop proprietors don’t know any of their customers by name, and try not to take a personal interest in anyone. They are all middle-aged men. Two of them have three days facial hair growth and builders clefts big enough to park a bike in. They call everyone 'mate', irrespective of age and avoid eye contact. ('Mate,' not 'Matey': kebab shops where the server calls you 'Matey' always have a dodgy raffish atmosphere.)

Unlike most kebab houses, 'The Bella Doner' sells kutluma, pakora and samosa as well as chips, and it also sells condoms, ‘morning after pills’, and is obliging about using the loo in an emergency.

You cannot get beer at ‘The Bella Doner', but there is always the glass-fronted  fridge where you can get coke, lucozade and even kefir (a speciality of the house), as well as tea, hot chocolate and that bitter, weak coffee that only seems to exist in take-aways.

The special pleasure of their doner kebab is that you can have home made chili sauce with it. I doubt whether as many as ten per cent of London kebab houses make their own sauce these days, but 'The Bella Doner' is one of them. It is a sharp, piquant, firey sort of sauce and goes perfectly with the meat. 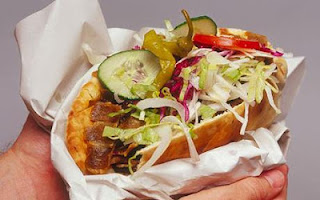 They are particular about how the kebabs are served at 'The Bella Doner' and never, for example, make the mistake of serving them in a polystyrene tray. The modern trend is for a deconstructed kebab with pitta, meat, salad and sauce piled on top of each other in a closed polystyrene tray and then suffocated in a plastic bag. But in my opinion a kebab tastes better out of a paper wrapping. Apart from the usual pitta bread, ‘The Bella Doner’ also serves some of those pleasant doner wraps rolled in flatbreads.

The great surprise of 'The Bella Doner’ is its restaurant. You go through a narrow passage leading out of the take-away, and find yourself in a fairly large room of plastic tables and chairs with framed pictures of Turkish landmarks hanging on the walls.

Here, you can get table service, for example, mixed kebab, or chicken kebab with shredded salad and chips served on real crockery and eaten with a knife and fork for about a six quid.

On late evenings there are no drunken rowdies. You can sit in the restaurant or at the little metal tables out the front of the shop and tuck into your kebab feast without being disturbed by loutish behaviour and foul language.

Many as are the virtues of 'The Bella Doner’ I think that the restaurant is its best feature, because it encourages a cross section of society to go there, instead of being the preserve of late night junk food drunks.

And though this is regulated and processed food, some horse meat inevitably sneaks into the doner mix. This, I believe, is against the law, but it is a law that deserves to be broken, for it is the puritanical nonsense of excluding this perfectly reasonable and nutritious flesh that has to some extent, reduced the quality of the doner and therefore its reputation.

'The Bella Doner’ is my ideal of what a kebab shop should be ­at any rate, in the London area. (The qualities one expects of a regional emporium are slightly different.)

But now is the time to reveal something which the discerning and disillusioned reader will probably have guessed already. There is no such place as 'The Bella Doner'.

That is to say, there may well be a kebab house of that name, but I don't know of it, nor do I know any house with just that combination of qualities.

I know kebab houses where the shish is good but you can't sit down, others where the chicken kebab is to die for but which are dripping with noisy and unruly crowds, and others which are quiet but the doner is generally greasy. As for restaurants, offhand I can only think of a dozen London kebab shops that possess them.

But, to be fair, I do know of a few places that almost come up to 'The Bella Doner’. I have mentioned above qualities that the perfect kebab house should have, and I know of one that has eight of them. Even there, however, the chili sauce is bland and the restaurant is not open in the evenings.

And if anyone knows of a kebab house that has a wide range of juicy kebabs, home made chili sauce, take-aways served in paper wrappers, a restaurant and eclectic clientele, I should be glad to hear of it, even though its name were something as prosaic as 'Kebab Machine’, or  ‘McDonners’.

In homage (and with huge apologies) to the memory of the great George Orwell, born 110 years ago this June. His outstanding essay about the perfect pub 'The Moon Under Water' was published in the Evening Standard in 1946.