East of London and north of Canterbury, this town is built around fishing, tourism and tarmacadum. It is famous for oysters, sunsets and real ale. Where on earth?

Actually, no prizes. The only mystery is why, with a CV like that, it took us so long to get there. But eventually, we did. We do like our seaside pleasantries in Family Atkinson and Whitstable proved to be an enormously diverting pleasure the other weekend. 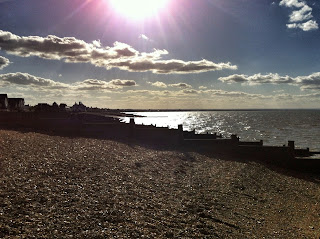 Diverting. Partly in the sense that I was deflected away from Team Europe’s foursomes and fourballs struggles; from Team England’s T20 World Cup shambles; and from Team Davoski’s unsighted racing selections. But more so because after an inexplicable gap of 15 years – a best estimate – we were meeting up again with our good friends Jan & Ian. The intervening period had seen them retire, become grandparents and relocate to this gem of a town in north Kent. Needless to say we had plenty to talk about.

The harbour is a refreshing and very apparent mix of real industry rubbing shoulders with the inevitable shopping and leisure opportunities. Fish processing, coal and timber transport cheek-by-jowl with restaurants, craft and gift stalls and an excellent fish market. This interesting juxtaposition explains why Ian and I were all misty eyed over a fully working original Thames barge moored at the harbour wall whilst Daughter No 2 was buying a pink and white woolly unicorn hat from an adjacent shop. 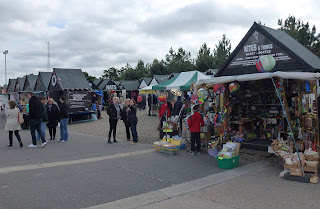 **Local history warning** The original harbour was built in 1832 as a railway terminus for the "Crab and Winkle" line (if I didn’t know better I’d say the North Kent Tourist Board had a hand in that) to Canterbury. Incredibly, and I have checked, it was the third passenger railway ever built and the first in the World to transport customers on a regular basis. A sharp poke in the eye to the Victorian powerhouses of the industrial north, then.

From the harbour we strolled (it was the weekend after all) along the shingle beach past weatherboard cottages, huts and shacks in various states of repair and renovation to Louisa’s shop. Louisa is Jan’s daughter with whom Helen has been very close over the years, although their period of separation had been even longer. A lovely reunion. It was all getting quite emotional. Luckily, there was a choice of two decent looking pubs on the corner. Drinking Whitstable Bay IPA procured from The Quayside, sat on the beach catching up and looking out to the Isle of Sheppey. Pure joy. 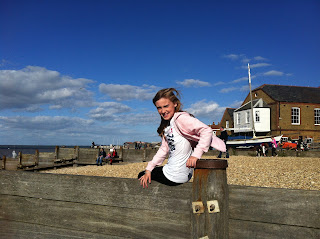 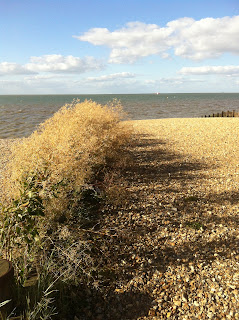 Later, in town we stumbled upon a record shop selling vinyl where I exclaimed with joy on finding some pristine UFO 7”picture discs. The shopkeeper grinned at the prospect of forthcoming purchases. “No, no, I’ve already got them. I just delighted to see them here!” His smile fell and was replaced by a look that just says ‘sad bastard’. The main shopping street was busy and pretty, but not too twee. It’s easy to see how the place appeals to visitors from cosmopolitan London, only an hour or so’s drive away.

Back at Jan & Ian’s, we met Louisa’s husband, Dan and their two lovely young daughters, promptly adopted by mine and together they spent a full two hours exploring the attic. The catching up was now at breakneck pace. I was delighted to learn that Dan and I had some recent grimy experiences in common to do with a blocked drain, plumbers’ poles and the unique aroma of open sewerage.

Later still, after good food and better conversation, it fell to Jan and Mrs A to safely see in the early hours: revisiting old haunts, old jobs and older friends; nostalgia the oxygen of the conversation and red wine its lubricant.

We headed out to The Old Neptune Inn for a swift pint before lunch the next day. Ian says this is the only pub in England actually built on the beach. At least two earlier incarnations of the boozer have been wrecked by the elements. The warped floor and twisted beams of this one, dating from the last days of the 19th century, are testament to its travails against battering north-easterlies. The ‘neppy’ (you’d think I was a local) has live bands on at the weekend and Ian told me there’s a good music festival on the beach in Summer that accompanies the beer and oyster festivals. 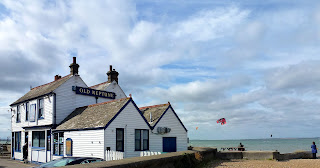 For lunch, Jan and Ian took us to the Lobster Shack at the other end of the beach. By now the wind is blowing with serious intent. Several dinghies have capsized at the mouth of the harbour and the kitesurfers are zipping over the foam at astonishing speed.

To get to the shack, we have to weave around East Quay and down a road with an industrial estate on one side and the imposing tarmac works on the other. This part of Kent was amongst the first in the country to adopt ‘blacktop’ roads. I asked Ian if he was taking us to the factory canteen for a bacon butty lunch. But just around the corner the road ends at a little square outside the famous shack. Inside, we found a huge open plan barn of a building with long refectory tables and large windows out to sea. Louisa, Dan and the girls joined us. Over fantastic moules marinieres, rock oysters and prawns, Jan shows me her stunning sunset photos taken from in front of the shack. Oddly, for a town on the east coast of England, the geography of the bay means a westerly facing aspect. I’m jealous.

Out in the estuary, it is clear enough to see the wind farm, and to just make out the spidery shapes of the Maunsell Sea Forts, hangovers from World War II where they provided platforms for anti-aircraft guns. They look more like an outtake from the final scenes in War of the Worlds. The barge we saw earlier can be hired to run trips out there. Next time maybe.

All too soon, it's time to head home. Jan & Ian have not changed a bit. Good people. The intervening years have been reasonably kind to us and we think we can make provisional plans to meet up again in 2027. It’s in the diary.