September 01, 2012
Saturday racing coverage switches to More4 today and next week in deference to Channel 4's big (and welcome) push on the Paralympics.

Incidentally, we cheered the Paralympic torch through Berkhamsted in the wee hours of Wednesday morning on its 24 hour relay from Stoke Mandeville up the road to the Olympic Stadium. In reality, it was more like a 26 hour relay. The bearers and their entourage were already two hours late by the time they pounded across our fabled streets. This was by then approaching 2am in the morning.

I think it was all part of a grand plan by Phil, the landlord in our local pub. The Lamb kept its doors open all night to meet the thirsty demands of its torch-eager customers. And whilst the ch-ching  of the singing till provided some inevitale motivation, Phil at least looked after his customers properly. Chairs appeared for the over-tired and hyper active  kids, ditto the pensioners. And tables for our drinks... I even offered to wheel out the fruit machine at one stage, and to see of we could get the kebab van to make an additional stop. 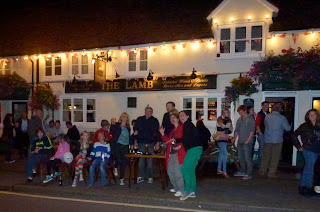 Great atmosphere though. We were lapping it up. The crowd was three deep outside the pub by the time a couple of police outriders doffed their helmets to us and thought twice about our request for burnout donuts around the mini-roundabout.

To be honest, everything that moved got a cheer. The bemused Gregg's delivery driver heading the wrong way up the road, the Brompton-fold-up-bike rider milking the applause, sundry police cars and finally the coach with other torch bearers, the official 2012 cars and then the torch handover and procession itself. After a long, beery and high spirited wait, things all happened quite quickly. Indeed I captured a rather delightful snap of the back of a bald headed bloke on front of me. Great night though.

Anyway, bit of a diversion, that. I'm supposed to be revealing some pretty sharp selections across today's card, three of which are on More4:

2.30 Chester - Tominator, though at 6- 1 he's short enough after everyone else also appears to think he ran better in last week's Ebor than his finishing position of 8th would suggest.

2.50 Sandown Solario Stakes - Master of War. Best form on show here, particularly against the solid Heavy Metal benchmark, and because the money seems to have come for Tha'ir this morning, I'm arguing that he's a value pick at 5-2. The horse would seem to want the extra furlong too. Hannon's record with 2 year olds is of course wonderful so it's a surprise this race has evaded him so often. Looking forward to seeing what improvement there is to come from Fantastic Moon.

4.15 Beverley - Elusive at 10-1 to put his best foot forward (a rare occurence to be fair) from an OK draw and land the Beverely Bullet stakes. Is there a better named race in the programme book? Great to see the veteran Borderlescott lining up here and he's not without place prospects.

5.05 Sandown - Proximity. I was thoroughly convinced by his win last time out at Wondsor and I'm happy to side with him here on handicap debut at 11-2.