September 19, 2012
On St Leger day, we were at Steve's 60th birthday bash, bathed in gorgeous Autumnal sunshine surrounded by bucolic Suffolk rurality. Steve and Di inhabit a wonderful Victorian rectory which they have painstakingly and lovingly converted into a top class B&B. For an insight into some of that pain (mostly Steve's) and love (see Di)  - check out this edition of  Channel 4's  Ruth Watson's Hotel Rescue about the renovation. These deeply complex reality programmes always need a Shakespearean sub-plot of intrigue. Step forward Steve who quickly realised the need for a fall guy to Ruth's patronsing wisdom. He expertly portrayed himself as the reluctant and unenthusiastic hoarding grouch with natural born comedic timing and understated scene stealing. 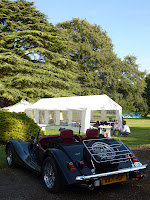 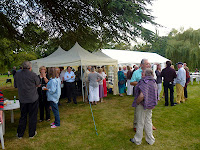 There was a marquee in the back garden, which Steve and Di used for wedding receptions and most recently an 80th birthday party. Inside and sitting in prime position on the top table was a gleaming barrel of Adams Topaz Gold. I didn't really want to pile in, on duty as I was. But who could resist? My duty was to take a few snaps of the guests to mark the celebration. That's all well and good, except that Steve's son happens to be a talented photography graduate already carving out a career in the business. No pressure then. Keir is also a budding actor and his appearance in Hamlet would keep him from his Dad's birthday until late. Hence my role.

The photo gig had not started well. On dusting off the SLR that morning I had found the battery only half charged with the adapter missing and no time to buy a new one. I packed the compact as a standby (3/4 charged) and well, there was always the iPhone for a particularly professional look if all else failed. Ahem. 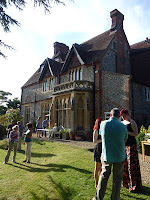 It's good to break the ice when you are wandering around sticking a camera in people's faces. I was appalled at how easily some digital-age photographic bullshit slipped from my lubricated tongue: "Official photographer, yes just back from a royal engagement in rural France...What a lovely group you make - anyone would think you knew each other....Smile for Facebook...Thanks, that's lovely - another one for my stalking collection". 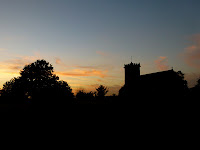 Of course, the battery had run out on the big camera long before Steve's climactic speech ("...after 60 years I've finally learned the secret of popularity. Marry a popular woman!") and cake cutting. The little camera decided to fall into sleep mode (clearly nothing to do with Steve oratory skills) on the very point of actual cake-incising. I got one of Di wielding the silver knife instead. Never mind. I captured few pretty sunset shots on which the hosts will no doubt reflect on with affection when recalling this big day...

There was was plenty of eating (epic spread), drinking and grand catching up to be done, too. Mrs A and Steve go back decades and there were some great anecdotes from EMI days. Apparently the balcony, over which The Beatles leant for their iconic 'Greatest Hits' red and blue covers, was moved from the Manchester Square office when it was demolished and re-erectred in pride of place at the new South Kensington base.

The racing banter didn't take long to materialise, either. Charlie declared his strong interest in punts and tips and it turned out Cookie knew all about Camelot beaten that day in the St Leger by an outsider. But not the outsider that I'd been rattling on about all afternoon. Thought Worthy, my fairly confident each-way shout was first beaten, by all accounts. It was Enke, at 25-1 and well held by my lad at York last month, that kept Camelot out of the history books. I found compensation in the next when Libranno rediscovered his early season form to land the Park Stakes at 16-1. A fact I was not slow in passing on after my public Leger humiliation. And then I learned that Nigel was only promoting the music nights at half a dozen Northern Racing tracks. The very nights that our family have been attending as fee-paying punters. What's the point in having connections and not being able to exploit them? By the way, you wouldn't believe how much Status Quo asked for... Well I didn't anyway.

The night started to get silly shortly after the Topaz Gold was drained off and someone pulled out a crate of Hobgoblin at 5.2% from under the table. It's lovely stuff, but it delivers a lasting impact. I made a nuisance of myself helping, but mostly hindering, Paula and Victoria who were putting up their tent in the lee of the marquee. Later I picked up some adverse comments from the Swedish contingent as I headed off to the bedrooms carrying a shiny black plastic overnight bag with Cookie in tow. Can I say here and now that the bag belonged to daughter No 1 and I was showing Cookie where his bedroom was. I don't care what the Swedes thought it looked like. Indeed Anna-Lena was already making mischief with her vaguely incriminating gallery of photos mostly featuring Mrs A with an ever-changing collection of alcoholic beverages. "They are not all mine" she pleaded.

A sweet and innocent justice of sorts was served, much later, upon the talented Scandinavian chanteuse. Anna-Lena and her husband Andreas were lodging with Ron and Glenys just up the road. The latter couple - lovely, sweet people and long standing friends of Steve and Di - were leaving the party around midnight. Glenys called over her house guests into the pool of light spilling into the garden from the bay window and started fishing about in her rucksack. Anna-Lena was huddled over the bag, probably a little curious. But no more so than the crowd of onlookers seriously concerned that Glenys was up to a no-good illicit trading transaction.  We needn't have worried. From the bag, Glenys pulled a sleeveless luminous jacket, complete with day-glo stripes and velcro fastenings, which she thrust into Anna-Lena's hands, followed swiftly by a rubber-cased flashlight. She then pulled a set out for herself and Ron and said, "That road is so dangerous at this time of night, the cars don't slow down and there is no footpath". Anna-Lena was very grateful and was half-trying on the safetywear over her cool partywear accompanied by our urgings, but thought better of it. Shame. I had my camera and "tall glamorous rock star wears hi-vis jacket at social event of the year" facebook headline all ready.

Later, chatting outside the marquee, I was disturbed by wailing guitars circa Frampton Comes Alive pumping from the speakers, and several notches louder than the preceding '70's disco mix, too. I staggered back inside and found James who, freed from his expert burger flipping duties earlier in the evening, was now flipping CDs into the PA. He was a metalhead. And although 20 years my junior, we had so much metallic ground in common. We eagerly traded highlights and experiences for the duration of at least another two Hobgoblins, ranging from the doom of Paradise Lost through the Slayer's finest moments to respectful doffing of cap to Tony Iommi's inspirational riffing. We indulged in ritualistic top live moment comparisons: loudest gig, biggest crowd, longest solo, fastest drummer, and most stomach-punching bass drum weave... Ah. Sweet memories.

What a great night. Steve and Di are impeccable hosts. The next morning, they were still at it: Steve sorting breakfast for a rectory full of sleepovers and Di organising a mass clear up and lifts to various stations for departing family and friends. It had been an even later night for some. Barry had fallen asleep at the kitchen table at 6am and Jo was leaving for a double shift at Pizza Express on one hour's sleep.

We said our goodbyes and rumbled out with Cookie to the coast for a head clearing tramp on the beach. Aldeburgh is wonderful. Fish and chips washed down by a pint of Broadside was perfect end to the weekend. 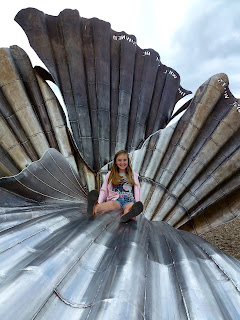