"Do you want this spare notebook?" I offered to daughter no. 1. "There are plenty of unused pages in it."

"Oh, yeah', she thumbed through the leaves. "It will be good for my revision".

"Ignore all those lists", I said, "Chuck 'em away if you want. They're just names of race horses."

"Yeah, I'd worked that out Dad. You don't write about anything else!"

So, this is a forlorn effort to prove that I do have some other hobbies. I really, really do.

The Guardian has been running an excellent 52 Weeks photo project on Flickr, in which I am thoroughly enjoying participating. Check out this fine gallery of the contributors. The idea is simple enough: capture an event, moment or view that makes each week memorable and post it to the group. As a brief, this is tougher than it sounds. I have strived to meet the challenge of searching out, or happening upon distinctive images for each post. Sadly I have often fallen back on the usual subjects, but I have nevertheless welcomed the stimulation.

One of the ideas behind the project is to explore the possibilities of iphoneography, where there is a burgeoning market in smarty-pant apps to filter, edit, stitch and otherwise manipulate images. But it's not all about smartphones. There are plenty of impressive photos on there taken with dedicated digital cameras and also archaic hardware using something called 'film'...

And here we are at half way already. I'm surprised how much I've got into this. Experimenting with some of the iphone apps that can transform images is a blast. Cheating? Yes. But in such a creative and liberating way that my purist photography principles have been happily lobbed out of the window. This is meant to be fun. Week 3. Bleakness on Berko Common. This is one of my favourite views down the valley, caught here on a frosty morning through watery sunshine. It was properly freezing. Those figures in the mid-distance were layered up and were chasing a dog to keep warm. 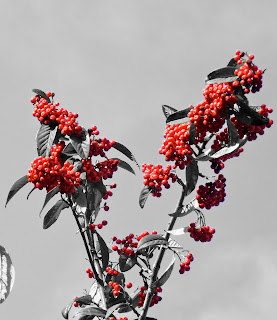 Week 4. By now I'd found some cool iphone apps. This one is called colorsplash and turns the photo black and white, so you can restore selected areas of the image to the original colour. The neighbourhood's garden bird population stripped this bush clean in about a week following this photo. 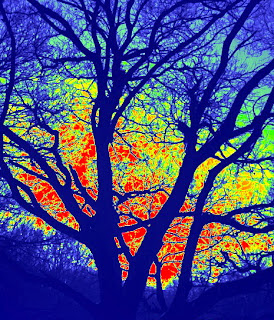 Week 5. Now we are getting flash. This app is called Camwow and has a fun little colour-temperature filter which exploded the sun behind this bare tree at Northchurch Common all over the sky. It's amusing, but I don't know what Cartier-Bresson would make of it! 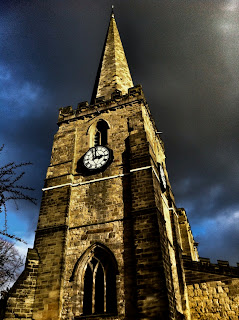 Week 7. Pickering church, augmented with a filter called drama on the snapseed app, which I discovered at about this time and have subsequently experimented with loads on this project.  My brother's not impressed. "Well, it's OK, but it's not very real is it?" Course it is. Real, but better. 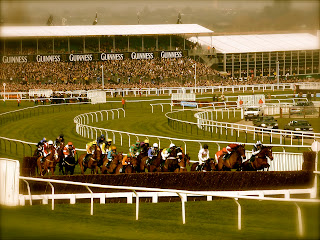 Week 11. Highlight of the year, the Cheltenham Festival, held every March. It was a bright day and highlighted nicely the runners in this amateur race commonly referred to as 'the four-miler'. In all honesty, whilst the vintage effect works OK, the edge-blur adds nothing to the photo and I should have left it off. One lives and learns. If only the same could be applied to gambling. 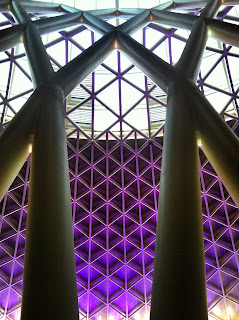 Week 12. The new departure hall opened at King's Cross this week, revealing this splendid roof and lighting pattern. This is taken from behind the main pillar near the ticket windows looking back over the restaurants gallery. I like to think that station-spotting is at least one step up the evolutionary ladder from train-spotting. But I may be delusional. Where did I put those egg sandwiches? 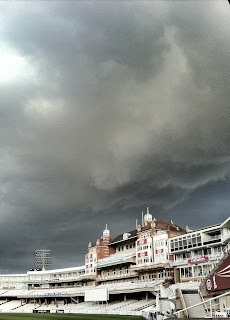 Week 15. It's a bitter, cold early April day. I was on my way to a net session down at The Oval in the week that the English Domestic season had it's earliest ever start. To add insult to injury, this seriously malevolent cloud was just about to dump its wares all over the carefully manicured outfield. Again, a touch of snapseed drama emphasises that pregnant sky. 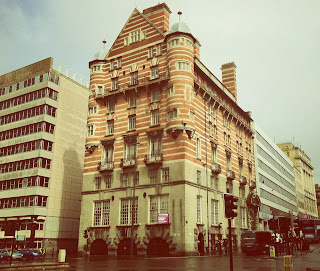 Week 16. I found myself in Liverpool on a date very close to the anniversary of the sinking of the Titanic. This is the former headquarters of the White Star Line, owners of the the ill-fated liner. The 5th floor balcony is where the news was conveyed to the public. The building is mostly empty now and needs a touch of refurb. The more iconic Cunard Building, this company's biggest rival back in the day, is just down the road by the pierhead. 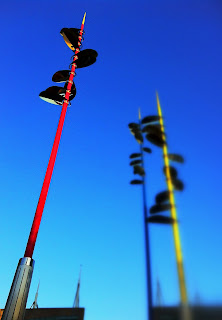 Week 20. On the road again. This time Birmingham, where these colourful wind sculptures caught my eye, illuminated by a low evening sun out of a crystal blue sky and sitting on a deceptive ridge, so that the pinnacles of St Martins-in-the- Bullring are just visible. The Bullring really has been transformed in recent years. It's actually a nice place to go now. Tilt-shift has been used to throw the nearest sculpture into sharper focus. 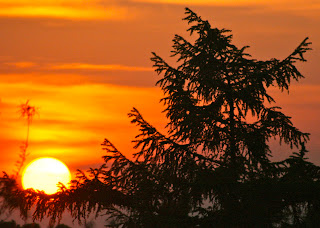 Week 21. It's May now and I had to include at least one sunset pic. This is with my DSLR and long lens out of the loft window. Not too much post-production going on here, just a bit of cropping. See. I can leave the toys alone if I want.

Week 22. Another week, another app. This time autostitch which creates a panoramic shot from a series of individual snaps. In this case The Thames near Waterloo. 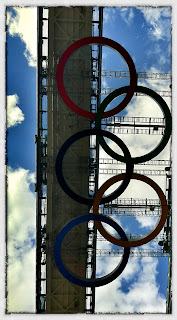 Week 24. And sticking with The Thames, these Olympic rings appeared on the underside of the Tower Bridge walkways in mid-June. A sure sign that the carnival is almost here. They now hang vertically between the bridge's two towers in an "iconic image of the London games", so said Mayor Johnson, anyway, shortly after he comically bellowed into a walkie-talkie "Lower the rings...now" during a marvellously choreographed piece of 2012 PR. 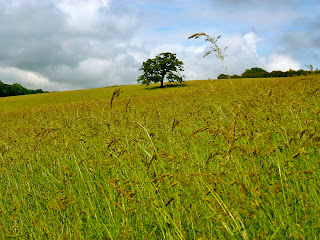 Week 26. Back to Berkhamsted Common for the halfway point of this project. Where was frozen clumps of fescue in January, now rises metre-high grass swaying (not so) gently in yet another westerly depression. Pretty though. Isn't nature a marvellous thing?