November 25, 2011
I was fortunate enough to get a quick tour around Wembley Stadium today. I’m doing some work with the FA’s Learning Zone and after our meeting, we got chance to have a nose round.

The arena itself is deeply impressive. I thought I’d better take a ‘look where I am, kids!’ photo for the girls. It didn’t work. I wasn’t quite striking the right pose when Charlie fired off the shutter!
I felt like a little kid myself, gazing out onto that arena from one of the executive suites. But the infrastructure behind the pitch and banks of seating is equally huge. Offices, meeting rooms, tours….I was surprised how busy the place was. The evocative Champions League gallery is really well put together and I loved the 1966 World Cup final crossbar outside the Atrium restaurant. We were with some Americans and I made ham-fisted attempt at trying to explain the significance of this now-twisted piece of metalware. “So did the ball cause that kink in the bar there?” I suspect I failed.

The architecture is absolutely striking, particularly so in the low winter sun. 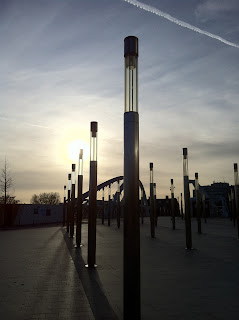 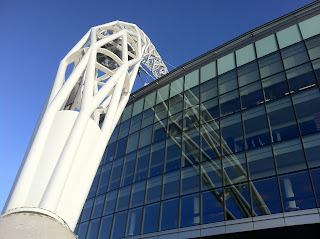 What’s interesting though is how the regeneration of the surrounding area has lagged behind the stadium. There is derelict land to the right and left of the site and the approach from Wembley Stadium station along a narrow road hemmed in by ugly hoardings is a bit depressing. The hoardings advertise the imminent arrival of ‘Wembley City’ shops, apartments and leisure opportunities which still seems some way off. The station has been renovated as part of the original £750m investment in the national stadium. And there was funding for the rebuilding of Wembley Central too. Though this appears to have ground to a halt.

The stadium and the stations feel like islands of regeneration floating above a sea of mediocrity. Wembley town centre doesn’t feel like it has too much going for it. I guess it’s difficult to retain the wealth created by the stadium within the local community. Although the FA have moved their HQ to the stadium, I didn’t see Trevor Brooking queuing up behind me in The American Charcoal burger and kebab house for his lunchtime shish.

Maybe that’s a bit unrealistic. And to be honest, if he had been there, he may have distracted me from watching the 1.40pm from Newbury. So just as well, because it was a belter of a race. Bob’s Worth got up to beat Cue Card in a very informative novice chase. Cue Card’s jockey Joe Tizzard has roundly been slammed for his ponderous ride. The only place he was behind was for a few strides either side of the winning post. But the winner is a thorough stayer and was receiving 7lbs. Cue Card emerges with credit, even if his gormless jockey doesn’t. And respect to trainer Colin Tizzard, who never shirks a challenge. Last season the horse was thrown into the deep end with seasoned Champion Hurdle prospects and this year he’s already had a crack at Grand Crus over the big ones.

Not meeting Trevor Brooking also gave me chance to peruse tomorrow’s cards up and down the country. The Hennessy, of course, rightly dominates the build up. Check out Bacchy's analysis here and see also a great run down the card from Good to Soft. I can’t do any better than these, save to say I’m compelled to back Wymott as he is one of my list horses. I’m surprised he’s as short as 8s. I may have a saver on Wayward Prince and wouldn’t be surprised to see Muirhead make the frame after a plagued run last time out.

I have another two 40TF horses out in the supporting races at Newbury. Both run off top weight in handicaps, which will impact on their chances of success. Our Island in the novice handicap chase has been going the right way this season, but I’m worried he’ll have too much to do here. So minimum stakes only. Rock On Ruby is a class horse and heads them all in the Gerry Feilden. It’s a limited handicap and so he doesn’t have to give too much weight away. I’m hopeful of a good run, though a tad surprised he’s here and not in one of the meeting’s better novice chases. Over at Bangor, Peddlers Cross continues his education over fences at an unbackable price.

The two big hurdle races of the day are hardly classic renewals. I’m of course looking forward to Big Buck’s stroll the Long Distance Hurdle. Sacrilege to suggest anything else. But where is the opposition in this shallow division? Up at Newcastle, there’s every chance that Overturn could nick the Fighting Fifth. He takes his racing well and last week’s win may not have left too much of a mark.

I’ll blame Trev if I draw a blank.