October 31, 2011
Is it just me? Or has Hallowe’en suddenly become nearly as big as Christmas? It was pretty low-key affair when I was a kid, growing up in North Yorkshire. Instead, we had an evening of mild naughtiness and monkey-business called Mischief Night on the eve of Bonfire Night. Hours of fun we had, ringing doorbells and running away, smothering door handles in treacle and tying up gates. The tradition was all about marking the slightly darker intentions of the Gunpowder Plotters back in 1605 when Guy Fawkes’s mischief was to plant 36 barrels of explosive under the House of Lords. This prelude to Bonfire Night didn’t seem to be indulged much outside God’s Own County. As I discovered at college, not long after leaving home when trying to involve some bemused would-be conspirators in some tyre-deflating tomfoolery, or some such. ‘What is this Mischief Night of which you speak? Imbecile!” The tradition had quite clearly had not made the journey from the broad acres of my youth to the Potteries of my higher education.

The regionalism of Mischief Night has its roots in the fact that Guy Fawkes was born and educated in York. But now, it is in decline. Dastardly misdemeanours of one historical celebration have been all but swallowed up by the sweets with menaces demands of another.

The burgeoning festival of Hallowe’en seems to be everywhere. The girls have been to two parties, been dressed as witches for the whole weekend, and left us with enough pumpkin seeds to feed a battalion of hamsters. (Do hamsters come in battalions?) (Or eat pumpkin seeds?) But our near-neighbours have taken the celebration to a whole new level. Their weekend Hallowe’en party is legendary. It was still rocking at about 3am on Sunday morning and had long since spilled out into the spooky garden where Edgar Allan Poe and MR James could be seen swapping stories by the licking flames of the fire pit. Possibly. The front of the house is a riot. It resembles the entrance to a ghost train-ride. All week, passers-by were stopping to take pics. I did the same! (I can’t wait to see the Christmas lights.) 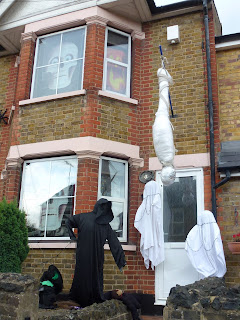 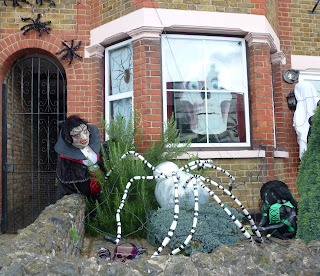 Much like Hallowe’en’s celebration of the closeness of the physical and supernatural worlds, October sees a closeness, and indeed an overlapping, between the jump and flat codes of the horse racing worlds….. (A quality link! C’mon, you know you love it!)

Arc weekend and Champions day have dominated October and the jumps season has been slow to make its mark. Small fields, low key fixtures and unremarkable performances. But Wetherby on Friday and Saturday pressed the accelerator, supported by a great Saturday meeting at Ascot. We are in the fast lane now.

My 40 To Follow list has seen 4 wins from 13 starts. But only one winner at better than 2-1 means I’m still showing a -4 balance. Negativity already. But it’s a better start than last year. Over the weekend, I had one odds-on shot go in (Notus de La Tour, who looked a natural over fences) one close second (Via Galilei pipped by Brampour who picked up nicely and was given a confident ride. VG might be difficult to place now) and one – in the same race – who was uncompetitive. But it was the horses from last year’s list that did the business.

I was so pleased to see Restless Harry’s scintillating victory in Saturday’s Grade 2 John Smiths Hurdle. Campaigned at the highest level last year, he never looked like landing a decent prize. I dropped him from my list. But a good Summer on his back and some TLC seems to have done wonders. Trainer Robin Dickin will send him chasing now. Lovely to see his emotional post-race interview. The horse clearly means a lot to him and betrays what a hard road it has been since his Grade 1 win at Aintree in April 2010.

And then Weird Al in the Charlie Hall Chase. Another quality horse who appeared to have lost his way, plagued with breathing problems and injuries last year. At 7-1, there were plenty of doubts in the ring about his robustness. But the switch to McCain has worked and his new trainer had him right for this. A lovely, patient Timmy Murphy ride and some very sound jumping puts him in the top division now. King George next, anyone? I’m not having the Hennessy.

My Bruv was at both days of the Wetherby Octoberfest. He’s leading the 40TF easily, at +19. He’s pleased – and so am I - that the track put on a good show. This fixture was in danger of losing its status. Poor track management over the years had not helped and last month’s bizarre and needless yellow-flagging of a race that led to nine jockeys getting banned seemed to be another own-goal. So I’m hoping this marks the start of a brighter future. Bruv left me with a tip, after the weekend’s action. “Chicago Grey for the Grand National. You heard it here first”. Hmm. Might have too much weight for my liking. But I’ll end with a tip, too. Make A Track, off my list, continued his unbeaten form with a classy novice hurdle win for Charlie Swan last week. Transferred to Ireland from David Arbuthnot’s yard in the Summer, this one has got to have the Neptune at Cheltenham in his sights. (But I’m a greedy git and I want something bigger than the 20-1 Vic Chandler is offering!)