These posts have so far all been presented according to the pattern of the traditional pre-1974 county structure of England without too much fuss. The geography of Local Government in England is a fractious mess (I’ve already had one nerdy pop at this subject back in Sussex). The old ceremonial counties make sense for this sort of project. Only a small liberty was taken with East Yorkshire which is technically a unitary authority, rather than a county.

I wanted to include Bristol on these travels to mark the city’s influential and sometimes controversial role as one of the major seaports of the British Empire, together with some of the curious, charming and overlooked settlements on each of its flanks. But how to categorise the area? What should I call it? (Never mind what anarchists have to say about this. Labels are important.) Avon would be the natural description as a former non-metropolitan county for this part of west of England. However, it has ceased to be. It is an ex-county: a brief administrative unit born in 1974 and killed off in 1996. The county was named after the River Avon – makes sense – as the area’s dominant geographical feature (excluding the Bristol Channel, of course). The unloved Humberside, which existed for the same period, was conceived on a similar riparian concept. However, the river in that case is a socking great estuary that needed the (then) longest single span suspension bridge in the world to unite the two banks. And it wasn’t even finished until 1981.

Avon was drawn from the former county boroughs of Bristol and Bath, together with bits of Gloucestershire and Somerset to create a county of about 1 million souls. On abolition, the county area fell into four new unitary authorities: Bath and North East Somerset, Bristol, North Somerset and South Gloucestershire. Absolutely ridiculous. Taking my lead from a few institutions who refuse to let Avon die - bodies such as the Avon Wildlife Trust, Avon Fire and Rescue and Avon’s parliamentary constituency boundaries, this post will keep the former county’s moniker alive.

Bristol is a vibrant, attractive and thriving city, re-inventing itself after the decline of its port functions. I’ve visited Bristol over many years for pleasure: cricket at the County Ground to see Gloucestershire thump Yorkshire when the idiosyncratic Jack Russell ground out a gritty, unlovely ton in front of a few equally gritty and unlovely visiting supporters; racing at Cheltenham when, in the absence of any nearby accommodation, we found ourselves in the Premier Inn for a couple of nights, together with a few beers in the hostelries around the city’s shiny Harbourside development; gigs at Colston Hall for old school rock ‘n’ rollers like Whitesnake, Magnum and Motorhead. The name Colston will crop up again in this piece.

However, my first encounters with the city were for business purposes. In the good old days of generously-funded arms-length quangos, I worked for the Countryside Agency who had a south-west regional office in a former hotel overlooking the spectacular Avon Gorge and the Clifton Bridge. Alas, the Agency and all its enterprising policy and programme delivery, is gone. As is the lovely office. Now returned to its original purpose, I gather.

You can’t go far in Bristol without bumping into something created by or celebrating Isambard Kingdom Brunel. The Clifton Suspension Bridge, gazed on so admiringly whilst I should have been developing rural social exclusion policy, was designed by that great Victorian engineer, although he never lived to see his creation finished in 1864. The project was dogged with political and financial difficulties, leading to a temporary abandonment of construction. Brunel’s death at only 53 in 1859 acted as something of a galvanising force and the bridge was completed as his memorial.

A little up-river from Brunel’s bridge is his World-first ironclad/propeller driven steamer, SS Great Britain, the largest liner afloat when it was eventually launched in 1845, years late and over-budget. The ship has had a remarkable journey since being built in dry dock off the River Avon that takes in running aground off Northern Ireland, intermittent transatlantic services, immigrant transports to Australia, being wrecked and scuttled in the Falkland Islands and a philanthropic rescue that brought her back home to be refurbished and converted in to a museum ship. This is arguably the most profitable phase of the ship’s long history.

Bridges, ships and of course railways. Across town is Brunel’s eye-catching, quirky Temple Meads mainline station. Built in mock-tudor style in 1840, the façade remains, although it no longer forms part of the station infrastructure. The addition of other lines led to congestion and the station was rebuilt a few hundred yards up the hill in 1870 to accommodate three competing train companies.

All this talk of Victorian industry to serve a growing Empire inevitably leads to the fact that much of the wealth of this maritime hub was gained through the slave trade. For all the youthful, cosmopolitan and dynamic characteristics of the modern city, Bristol's coming-to-terms with its past has recently been seen in headline-attracting terms.

Bristol’s official involvement in the transatlantic trade started in 1698 when the London-based Royal African Company’s monopoly was ended. One member of this Company was the merchant Edward Colston, who as well as a slave trader was a significant benefactor to Bristol charities. That name again.

But many Bristolians profited from the slave trade alongside and after Colston. It dominated the city’s economy and seeped in to all aspects of business and life. This comes from the Bristol Museums group:

“Not only shipbuilders and slavers but also merchants, tradespeople and manufacturers. Small investors could buy a share in a slaving voyage and profits could be made at every point of the ‘triangular trade’ between England, the ‘Guinea’ (West African) coast and the Caribbean.

Bristol ships supplied British colonies with a wide range of goods for the plantations, including guns, agricultural implements, foodstuffs, soap, candles, ladies’ boots and ‘Negro cloaths’ for the enslaved.

Slave-produced Caribbean produce such as sugar, rum, indigo and cocoa were brought to Bristol where sugar refining, tobacco processing and chocolate manufacturing were important local industries. Thousands of working people were employed in these processing industries.

The profits from the slave trade formed the basis of Bristol’s first banks and literally laid the foundations for some of the city’s finest Georgian architecture.”

The Black Lives Matter movement that became prominent during 2020 after the murder of George Floyd feels like the most seismic political and social movement to highlight and confront racism in my lifetime. It has raised the awareness of ugly, unforgiveable incidents of police brutality and racially motivated violence. It has caused a serious re-evaluation of our white-washed history, of white privilege and of inherited prejudice. It has made me question things about fairness and equity that I had previously taken for granted. Racism seems deep-rooted, complicated and often just below the surface of too much every day life.

The protests that led to the toppling of Edward Colston’s statue from its plinth in a Bristol public park caused both outrage and support. Colston has become a touchstone for the debate about contextualising the actions of long-dead individuals during the slave trade that at the time was legal and tacitly supported or at least condoned by the Government and the Church. Colston was also a benefactor to charities in Bristol and this apparent contradictory behaviour has been cited by critics of the incident as proof of the need to maintain a balanced view in what they see as the ‘rewriting of history’.

However, it emerges that Colston’s generosity was selective. A second plaque had been planned by Bristol City Council for the plinth to better explain the trader’s life. It was to read “Edward Colston played an active role in the enslavement of over 84,000 Africans (including 12,000 children) of whom over 19,000 died en-route to the Caribbean and America. Colston also invested in the Spanish slave trade and in slave-produced sugar. As Tory MP for Bristol (1710–1713), he defended the city's 'right' to trade in enslaved Africans. Bristolians who did not subscribe to his religious and political beliefs were not permitted to benefit from his charities.” The plaque was never installed.

Deep in to the 21st century we cannot be venerating and celebrating slave traders. I might not have been at the front of the queue to pull down the statue and tip it in to the harbour, but there is no reason to mourn its loss. Other such memorials, busts and portraits should be stuck in a museum and not honoured, or at least better described so that we can understand what they and their paymasters did.

Moving on… Until this year, I had not ventured far beyond Bristol’s city limits. I’m pleased to report that since June I’ve added visits to villages both north-east and south-west of the regional capital.

The first occasion was in the company of a few old lags who knew the area far better than me. We were celebrating the marriage of our friends Louise and Steve who have connections to the area from way before Mrs A and I knew them. For their party, they picked an estate on the banks of the River Severn at Old Down with splendid views down the river to a bridge that IK Brunel had nothing to do with: the graceful Second Severn Crossing, opened in 1996. 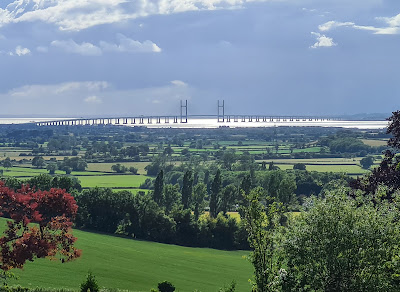 We were staying at The Anchor in nearby Oldbury, a fantastic, pretty Theakstons inn with a gorgeous garden and a warm welcome. Yes, I’ve slipped into review speak. I’m naturally hoping the owners read this and offer up a couple of frothy beers in thanks. The sad part of this is – given our late check-in close to the party get-go and a ridiculously late return after said event – we didn’t sample any ale. Not one pint. That may be the first time we’ve ever stayed in a pub and not had a bevvy. Oldbury is upstream from Old Down and we took a head-clearing ramble along the bank next morning and ticked off another river crossing: the original Severn Bridge dating from 1966.

Louise and Steve’s party had been a blast. The 70’s disco theme was enthusiastically embraced, more like bear-hugged and python-constricted, by all the guests who, en-masse created a dangerous nylon/polyester fire hazard. Enough static electricity to stem the current fuel crisis. And the colours! There’s a 70’s museum somewhere with shirt-shaped holes in its lino and curtain collections. 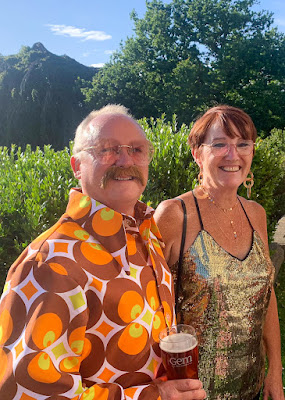 Talking of 70’s, in July we popped over Clevedon on the other side of Bristol, on our holiday-making way to Cornwall. The town appears to be caught in a 70’s time trap. Though maybe more like the 1870’s than 1970’s. Attractive pier, wrought iron-detailed bandstand, tidy begonia-stuffed flower beds in public parks, and Victorian-themed tea rooms of a ‘Two Soups’ vintage. We stopped for coffee and sandwiches. The prices were definitely modern however, and I briefly wondered if we’d paid for a guest appearance by Julie Walters doing a Summer season. I did like the pier, as did John Betjeman, apparently. Very much a new entry in my top ten. We stopped short of looking in estate agents’ windows though. 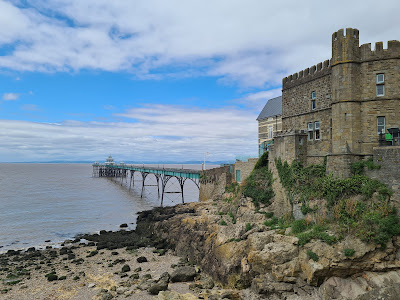 Those unsubtle references to bridges in the blurb above should serve as fair warning. They only head one way from this bank of the Severn Sea. Yep, Wales next and all the juicy rugby/sheep/Gavin and Stacy stereotypes that she has to offer.