September 03, 2017
‘Don’t bring pineapples’. Not your usual Reading Festival advice from the organisers. ‘And don’t bring weapons or drones either’, mocked the headline in the Reading Chronicle. It was all to do with The Galls Animals and their ditty ‘Pork Soda’ where the line “pineapples in my head” had prompted fans to bring the fruit to earlier gigs.

Daughter No 1 was getting packed for Reading. She listened to the song and said she didn’t like it much so wouldn’t be taking exotic fruits along.

I was getting her packed for Reading too. My contribution mainly involved emptying out her tent after the Wilderness Festival a couple of weeks before. This consisted of a goodly sprinkling of Oxfordshire clay, together with a colourful range of glitter spots and face paint debris.

I wasn’t sure how much more the £15 Tesco four-man tent would take. The flysheet zip had already broken and we sent her off with some safety pins to hold it together. Had there been much rain, the safety pins would have been spectacularly useless in keeping the tent water tight.

When I click-and-collected it from our local store, chatty sales assistant hauled my package from the recesses of the store room and declared that “You can always tell when Festival season has arrived. We’ve sold five of these just this week.”

That will be five returns at the end of the season then, all with broken zips.

She returned, safe, sound, smelly and knackered. Muse were apparently the Reading highlight (I was jealous of the Brian Johnson guest spot when he smashed out ‘Back In Black’), but the overall verdict seemed to go to the Wilderness Festival’s mass yoga event. It’s all Plank ‘n’ Roll, baby.

The grown-ups had a bit of Festival Fever this Summer as well. We loved Green Day’s headlining slot on the first Saturday of the first British Summer Time bonanza. It was sandwiched between Phil Collins the previous evening and Justin Bieber the night after. Interesting schedule. A rose between two thorns? A fart between two cheeks? Hard to say really.

Old punks never die. A fact emphasised by Stiff Little Fingers, who kicked off events on the main stage. They burst out of Ulster in 1977 as angry young men searching for a voice. Forty years later, the only thing that has changed is that they are 40 years older… Our mates Nick and Den had come with their youngest, Jenny. Nick had insisted that, if nothing else, she at least saw SLF and experienced ‘Alternative Ulster’ in the raw. Daughter No 1 was with us too and both teenagers gave the band a youthful seal of approval. 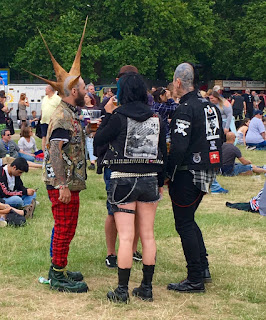 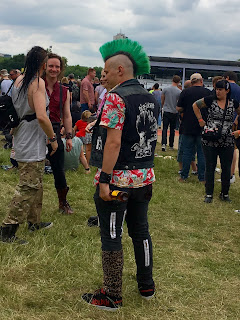 This was the first gig where I’d seen signers projected on to the big screen, interpreting the lyrics for punters with hearing impairments. The Damned’s set gave the signers a thorough work out. ‘Love Story’, ‘Neat, Neat, Neat,’ and ‘Nasty’ came and went in a hail of lyrical salvoes and scything guitar. After 15 minutes one signer had to make way for a replacement and headed, no doubt, back stage to plunge her hands in a bucket of iced water.

The surprise package of the day were undoubtedly Gogol Bordello. This gypsy punk ensemble played the sort of rumbustuous, feel-good music that provoked a 40 minute park-wide dance-a-thon. The band hail from New York, but the heritage is all about traditional Eastern European vibes spiked with dance, dub and rock. There’s a strong Jewish influence to the sound too, and a slice of ‘Fiddler On The Roof’ would not have been the biggest surprise in the World.

The only downer on the day was The Stranglers who were confined to the second stage, where there was an inadequate sound for the size of the crowd that pitched up to see them. We picked our way through the hordes, Moroccan flatbread wrap in one hand, pint of craft beer in the other (my, how Festivals have changed…), and managed to find a spot close enough to hear Dave Greenfield’s keyboards flesh out ‘(Get A) Grip (On Yourself)’ above JJ Burnell’s excellent, but swamping, bass lines.

The crowd began to disperse back to the main arena for Green Day before The Stranglers had finished their set. One of their finest moments, ‘No More Heroes’ was delivered in an underwhelming atmosphere that had the air of exit music for a film. Desperately disappointing.

Green Day were fine headliners. Their emergence on stage was preceded by ‘Bohemian Rhapsody’ blasted over the PA and sung with such gusto by the crowd that a video of the rendition shot from behind the band’s empty drum stool went viral on social media. 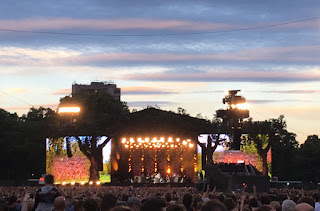 A week later, we pitched up in Tring, just down the road, for another retro workout. This time the music erred rather heavily towards the poptastic 80’s. The weather was hot. Otherwise there were no similarities with Green Day at all. Never, ever tell any of my heavy metal mates that I was singing along to the Real Thing. I hang my head in shame. 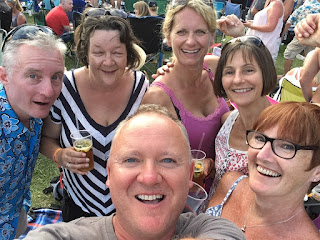 That said, when Midge Ure cranked out a delicious version of ‘Vienna’, I became quite emotional. About 15,000 massed voiced declaring that the feeling had gone and that it meant nothing to them. What they thought about haunting notes and pizzicato strings was less clear, however.

Can’t say the OMD left me unmoved either. ‘Joan of Arc’, ‘Souvenir’, ‘Forever (Live and Die)’. So many classics. I had forgotten how many foot-tapping ditties they churned out.

About an hour later, the reaction of festival goers on the way home was less foot-tapping, more screaming for mercy. Mrs A, Sue and P had decided that a group sing-a-long was in order. We had just missed a train south and our platform was quiet. So this revellious trio pitched their camping chairs, sat down and delivered a gruesome and yet enthusiastic a-cappella distant relation of, you guessed it, ‘Bohemian Rhapsody’. The situation might have been containable if the northbound platform had not been swamped with people waiting for a late running train out of Euston. Requests (both for songs and suggestions for where the camping chairs might more usefully be employed) were hurled across the tracks and the impromptu concert was dragged through a few more popular classics. Respective trains arrived in the nick of time. 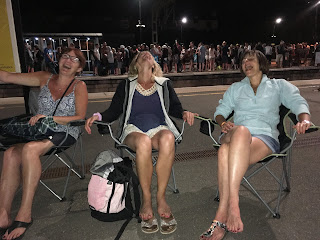 In search of credibility restoration, and in the belief that like punks, old rockers never die either, I headed to Maidstone, that cradle of rock ‘n’ roll mayhem, for the Ramblin’ Man Fair.

Amongst the fine classic rock, metal, blues and prog from such stalwarts as UFO, ZZ Top, Magnum and Wishbone Ash, there were some rollicking sets from newer kids on the block. Blues Pills and Blindstone both brought a Scandi twist to their high-octane blues-infused psychedilc rave ups. Fantastic. Must be all that pure air and expensive beer. 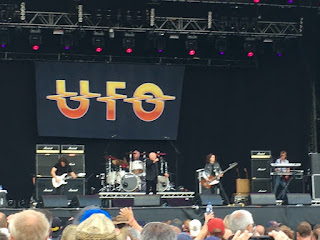 On the way to the bar I bumped into a face I recognized.

Not the best opening gambit, I’ll admit. He scrutinized me.

There was a flicker of recognition, though he was all but gone by then, stumbling backwards through the crowd, clutching four pints in a cardboard carrier.

A fortnight later, I saw him again. In The Lamb, naturally.

“Hey, weren’t you at Ramblin’ Man!” I was expecting a similar response to the last time we met. But no, we connected.

“Oh, yeah, I remembered you after the gig. Sorry, I was a bit blasted!” 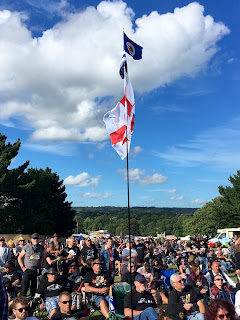 Dick was propping up the bar with a bloke who he was keen to introduce me to. Turned out his American mate, Dave was one of the co-owners of the Festival. Small world. There was plenty of energized blather after that and I fully expect at least a full VIP area/glamping package for the entire weekend next year. Now that my new mate is the original Ramblin’ Man!

Just one last Festival to report. More precisely a festivity, I suppose. That of my Dad’s 80th birthday. No fan of parties, the four of us, my Bruv and Dad’s brother, Uncle Roland decided to take birthday boy for a bit of fine dining at a classy gaff in Malton. When I was a kid, the words ‘classy’ and ‘Malton’ would never be heard in the same decade, let alone same sentence. The place would have been a great choice for a punch-up on your 80th birthday – as well as any other day – but not much else. Now it seems the market town is undergoing a culinary rebirth and has become a foody destination.

We were not disappointed. If the Old Lodge is the benchmark, the town has come an awful long way since breeze-block pasties at the station caff. 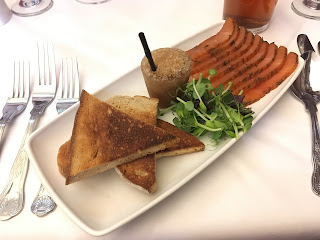 Mind you, a bit of quality like that comes at a proper price. High amongst my Father’s qualities is a traditional recognition of what constitutes value for money in the eating department. When the bill came in a brown leather wallet, Dad opened it, glanced at the total, muttered “aye” and passed it to my 20 year-old daughter like it was pass-the-parcel in a Belfast pub circa 1972. She looked at us helplessly, fearing her student loan was to take a fatal hit. 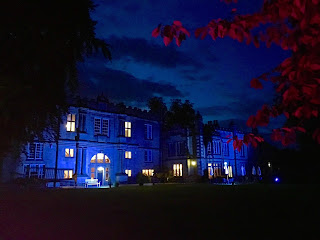 Malton is coming up in other ways too. On the outskirts of the town, Jack Berry House has been open for a couple of years now. It is a state-of-the-art rehabilitation centre for racehorse jockeys. Malton is the life blood of racing in the north and this new establishment is a real step forward.

Dad and Roland were in the front of the car as we neared the Centre. I was in the back.
“Have you seen Jack Berry House yet, Dad?”

“It’s there, Dad. On the left. Just next to the cricket ground.

Is it too much to hope that Father might find some patience now he’s in his 9th decade?

Dad and Roland probably see more of each other now than at any time in the last 50 years. Both widowers for the last few years, they get out together every other fortnight or so up to the Moors or round Dales, finding a pub for lunch. Bruv often chauffeurs them about. He told me that they had a great drive around Rosedale and Farndale recently, whilst the heather was in full spectacular bloom. At their last stop atop Chimney Bank, Bruv parked up so they could take photos. As he got out, the collective view from the back seat was that they would stay in the car. “It’s a lovely view and all that, but sometimes we just can’t be bothered...” Bruv just shrugged. Clearly you really can take some things for granted.

I think that brings matters up to date. If you’ll excuse me, I’m just off to Tesco’s to return a dodgy tent.