“What even is brown sauce?”

CB-D is curious. Me, Daughter No 1 and he are on the way to Sandown races. The conversation has turned to the best condiment to put on your chips.

“Well, it’s tomatoes and spices and vinegar, mainly. Brings a meal to life. And molasses. “

DN1 and CB-D claim never to have tried it.

“Molasses? What are they?”

“It’s a type of spice I think. Or maybe it’s a bean. Could be one of those things you find under a rock at the beach.”

The bloke next to CB-D desperately tried to avert his eyes to avoid blurting out laughing. His screwed up, tortured face reminded me of the centurion in ‘Life of Brian’ trying not to corpse when Palin’s Pontius Pilate says “Anybody else feel like a little... giggle... when I mention my fwiend...Biggus...Dickus?”

“Urgh. It’s like the bits of sugar left over from when they are refining it that they can’t use in anything else”.

There was precious little brown sauce consumption done at the track. Both teenagers are vegetarian and the famous tangy pottage was not applied to either their falafel wrap or their halloumi burger.

Sandown racecourse on Brigadier Gerard evening is not really HP Sauce territory. The place, bedecked with geraniums and marigolds, is more your Pimms No 1 venue, of which there were many purveyors. DN1 availed herself of at least two servings of ‘summer in a glass’, with a good half bunch of mint leaves jammed in the top. Classy.  CB-D and I were on cider and bitter, respectively and three of us set up base on the open top tier of the stands around the parade ring, bathed in evening sun. 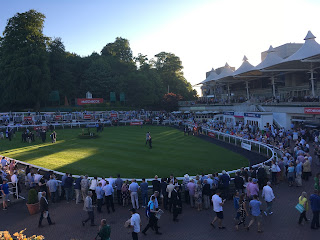 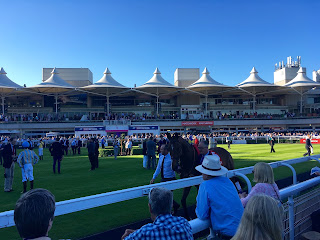 I tried to identify particularly interesting traits about the horses being led around the lush lawns for the benefit of the two novice teenage punters in my charge. I tried. I failed. Most of my observations were of a lowly “look at the size of that monster,” “he’s just done a dump”, and “oh look, there’s Frankie Dettori”.

Nevertheless, it would be hard to imagine more pleasant scenes than those between-race interludes on the sun decks. Such moments, of course, needed selfies to make them complete. They are never my strong points, selfies. Short arms and overactive face muscles are to blame. I delegated the shooting to CB-D. The initial results were mixed…

DN1 had casually said on the way to the track that her punting strategy involved clearing “…about £700. That would be nice”.  After three races that had steadfastedly refused to offer up runners (let alone winners) at the average odds of 35/1 required to turn her £4 stake per race into the targeted sum, she said that the new plan was to scour the floor for discarded winning betting slips or perhaps vouchers for High Street stores. Interesting approach.

It didn’t come to that, because in the lucky, lucky last, she found Laidback Romeo who came with a perfectly timed run from out of the pack and up the hill to land her £45. It struck me as a long way short of the aspired £700, but she seemed to be ridiculously happy all the same.

Just before the final heat, CB-D was keen to get his bet down and said something about there being two minutes to the off.

“Two Minutes to Midnight!” I blurted, quick as a flash. “Maiden song. I’m off to see them on Saturday!”

CB-D looked at me blankly. But not so the bald, thick-set bloke in front of us who turned round to reveal his battered, fading Iron Maiden tour t-shirt, circa 1986. Worn as a badge of honour.

We were immediately off on a heavy metal banter-trail taking in landmark gigs across the years, only mildly distracted by the tittering of the youngsters at my side.

“See? Metal is a universal language”, I told them.

CB-D’s moment of glory had come much earlier. He played the sort of casual, sustainability-driven punt in the 2nd heat that really had no right to work. Having met us at the station straight from his teaching assistant job at a school of hard knocks in Aylesbury, he had not found chance to get his hands on any cold hard cash. This meant his first ever right-of-passage-real-live-bet at the Tote booth involved emptying the shrapnel from his pockets on to the counter with an ostentatious clinker.

It was all staked on Havana Grey - the bet came to a few coppers short of £4 – who blasted down the 5f course, smashing up the juvenile sprint without seeing another horse. Arguably one of the performances of the night. The winnings kept CB-D in bets and food until he located the cash point in the bowels of the betting hall.

This was actually the first race we saw. Thanks to a signalling failure, we were late. I didn’t see my winner – the three of us managed one each – Boycie in the opener. I heard him though. The bet was struck on the train and walking from Esher station down the lane adjacent to the course, the clatter of hooves bouncing off the good-to-firm was loud and clear, just the other side of the green ship-lap fence. I gathered later that the last set of rumbling hooves was probably my boy’s. He was held up until late by his jockey who despite dropping the whip in the last few strides, still got Boycie home by a half-length.

I was keen that the youngsters struck their own bets so that they became ingratiated with unique language of betting; and with the ebbs, flows and thrills that go with finding the right horse at the right price. However, after protracted checking and scanning of id cards each time to verify their ages, it became clear that this was adding very little fun value to the overall experience. The same trials happened at the bar. Inevitably, I ended up placing the bets and fetching the drinks whilst the pair had a well-earned rest in the comfy wicker garden sofas on the upstairs terrace. Bless.

This meeting is the richest evening card in Britain. Two Group 2s and two listed races attract decent prize money. The field sizes were only OK though. And I was surprised that on such a glorious night that the attendance wasn’t greater. Whilst a decent crowd had pitched up, it was nothing compared to the hordes that descended on the track in the cold midwinter for Tingle Creek Saturday. Midweek racing is still not that attractive compared to the weekend offerings.

Nothing wrong with the quality of the racing though. Big Orange was irresistible in the Henry II Stakes under Frankie Dettori, who judged a perfect ride from the front. Next stop, the Royal Ascot Gold Cup for him. Not to be out done, Ryan Moore brought Autocratic to the boil in a beautiful sweeping move to land the Brigadier Gerard. The country’s best two riders on current form taking the best two races of the night. Moor went on to bag a double with Khafoo Shememi beating CB-D’s shout, Escobar in the Heron Stakes.

There was time for a last drink by the parade ring as the sun went down. I think the alcohol was starting to get to DN1 and CB-D who invented a potential new end-of-meeting race where punters would be picked at random to line up by the half-furlong pole and sprint for the line. I think this was inspired by seeing a couple of suited-and-booted lads who were carrying a fair bit of condition staggering around the lawns after a few too many sherberts. The youngsters even suggested that entrance tickets should state that participation was obligatory if picked. I told them that I liked idea as a fresh take on the occasional charity race at the end of big meetings. I undertook to promote the concept on this blog. It conjures up some hilarious images, though on reflection I can’t see it getting past the BHA, tbh. ROFL.