The gift that keeps on giving

October 19, 2016
The last time I took a circuit around the increasingly well-furnished Green Park, I was clutching the remnants of a large doner, the after-party following a few beers in the Barley Mow, and weaving towards the tube station. The kebab was purchased from Flames Grill next to Victoria Coach station. Sadly, it is now merely rubble holding together the foundations of yet another corporate office makeover in the ever-redeveloping Victoria Street glasshouse canyon.

Still, the tree behind which I relieved myself was still there in the park. I was happy to point it out to Mrs A as we ambled towards a very different culinary experience. A table was awaiting us at Michelin-starred Galvin At The Athenaeum. This was a birthday treat from Mrs A. And some. Fine dining harvesting the best of British ingredients and served with classic style and a smidge of swagger. Was that starch-aproned waiter flirting with my wife?

Caramelised apple tart sticking to the inside of ones ribs slows the progress a little. We took an age to perambulate through Piccadilly before settling on the Blues Bar in Kingly Street for a drink. A late afternoon set of acoustic blues was just kicking out and we congratulated ourselves on a great find. As it turned out, we left just before my mate Bacchy stumbled into the self same establishment mid-shopping spree. London is such a small place for the hip crowd… Anyway, just as well he didn’t see me knocking back gin-and-tonics in there with all those lovely real ales on view. The heavy dessert had left its mark.

Hitting 50 has been a pleasurable experience so far. That day was the first of a steady flow of excellent celebrations. Dad and Bruv came down to take us for a birthday meal over the road at our rather fine pie emporium, erstwhile of Covent Garden. We’d taken a turn around Marsworth Reservoir earlier and fancied that we’d earned some of their deep-filled crusty goodness. Especially after the dog spun into a buzzed-up roll around the embankment and was a hair’s-breadth from pitching over the side into a sheer 10-foot drop. I don’t remember having this much heart-stop with the kids when they were 2½!

My local Corals was the scene of some wild celebrating soon after. Though this was nothing to do with my anniversary. I had snuck in to have a quiet bet between deadlines (the rarefied joys of working at home) and found an unexpectedly animated scene. A regular punter, Dave, with whom I’ve had common exchanges about lucky winners and unlucky losers, was having a good day. Storm Rock, the 3rd leg of his each way Lucky 15, had just crossed the line in front at Salisbury. He was hugging the cashier, having by then locked in a four-figure profit. The last leg was the 4.10 at Nottingham. The same race I’d come to watch, and I quickly realised we were also on the same horse, Tomahawk Kid. I shrugged and offered him a muttered apology about surely having brought him the kiss of death.

It was unnecessary. The Kid bounded clear from the two-furlong pole and his rivals did not sight him again. Dave was leaping around wild eyed and breathless, mobile hanging off his ear. All his birthdays and Christmasses together. I and every other punter in the bookies (that’s the chain-smoking chef from the Szechuan take-away, the silver haired retired plumber and the toothless free paper deliverer) were slapping him on the back. Liam, the shop manager was furiously calculating the winnings. After adding in the bonus, he declared,

“North of sixty grand at least, my lovely pal!”

I sheepishly presented my own winning slip courtesy of Tomahawk Kid, collected £30 and sloped off.

The winnings were partly invested in a bowtie. I had decided to have a bit of do to formally mark the arrival of my half century. ‘Black tie’ we said on the invitation. ’Let’s pretend we are classy, if only for one night’. So now Mrs A said I couldn’t wear an elasticated bowtie. It had to be the real thing. But I failed to leave the requisite hour before our event to affix the wretched thing properly.  We arrived at the venue and I had to enlist the help of four people and three different You Tube clips that even then only resulted in a scraggy, limp, lopsided effort.

“I still vote labour!” I pleaded and pointed across the sea of penguin suits to another mate at the bar. “Me and him. We are the blokes who vote labour in this town. Every time!”

The jazz trio were genuine class. It would have been easy to find a decent rock and metal covers band. I really fancied something different though. Nell & the Hot Mess Muggers were certainly that. Stylish hot club, chanson Francais and gypsy swing. It was as if Django Rheinhardt was in the building. I thought the band caught the mood perfectly and there were even spontaneous outbreaks of actual dancing. Briefly. 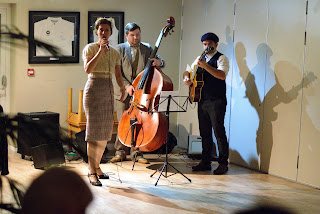 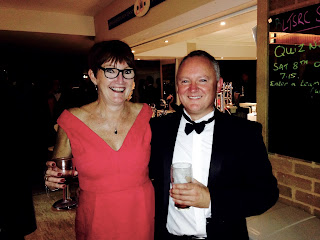 Sadly, we reverted to type back at the house. By the time the stragglers had come back (bolstered by a few more off the last train from London), the night was filled with lusty, ill-advised Meatloaf singalongs into the early hours. Oh well. The spell could never last. Beyond The Sea and Ou Es-Tu, Mon Amour? will have to wait for next time. The whole evening was an absolute joy. 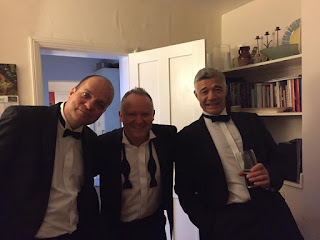 Birthday events have continued to roll on. I am a lucky boy. Last week, Mrs A and I went to The Book of Mormon, gifted by a good mate.  A brilliant, irreverent, edgy, funny, slick, camp, unexpected cult musical mash up. Soon we are being treated by some more great pals to dinner in probably the finest country hostelry in these parts. Then there is a beer tasting event in south London to cash in, courtesy of the inlaws. And further ahead, we have a wonderful evening at Ronnie Scott’s Jazz Club to enjoy; and then a guided walk through Mount Teide's secluded passes next time we visit Auntie Sue. Being 50 is a blast so far. I’d recommend it to anyone.

Finally, by the time May hovers in to view, I will be going to see Iron Maiden with a mate who, together with others, bought me a ticket for one of the band’s Book of Lost Souls dates. I first witnessed these legends in 1987 on the Somewhere On Tour roadtrip. It was a close call though. The Hammy Odeon voucher had to be retrieved from the log flume at Alton Towers after the violent final descent (am I overdoing the drama?) jerked my wallet out of my jacket into the splash pool.

Unknown said…
Well I hope my 50th is as goods as yours Davoski. What a super night and I agree wholeheartedly with your comments on the band, I felt like I had a cameo in The Great Gatsby. Hurrah to 50 more. Cheers Brynaldo Reynaldo
Wednesday, 19 October, 2016