Four blokes at the Oaks

June 26, 2016
I’ve now been in every enclosure at Epsom racecourse. Granted, as bucket list-ticks go, this would rank a little below hang-gliding down the Grand Canyon or slamming a Ferrari around Silverstone. But then again I’m not very good with heights and I don’t drive.

Ladies Day at the Derby meeting is a favourite day out and one with a rich history for the lads. Catching the Oaks card from the Lonsdale Pedestrians completed the nap hand at this fine track. The enclosure was a right bastard to find though. None of the stewards had a clue. First I went under the track via a foot tunnel, then sent left past the funfair and into a gravelly coach park. That was clearly all wrong. I retraced my steps and struck determinedly right, which was right. Eventually I snaked my way round the back of various pavilions and found the entrance that was no more than a gap in the chain link fence, policed by a steward with a cash apron round his middle. Very low tech. I put away my contactless credit card.

The Lonsdale, it became apparent, was really where all the vintage open top double-decker buses parked up. They had disgorged corporate jolly-seekers into private gazebos erected at the front, with pretty trestle tables straining under the weight of prawn vol-au-vents, cucumber sandwiches and high-end picnic food. I was taking in this charming scene, strolling down the side of the track when the lads hailed me with chuckles of derision at my lack of alertness. Bryn, Nick and Bacchy had been there about twenty minutes and I was soon joining them in Doom Bars. 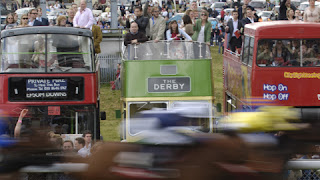 The enclosure had a strange aspect. The ground fell away towards us from the main stands on the posh side of the course, continuing the uniquely testing adverse camber up the home straight. This meant we were looking up at the track. I commented that you’d be able to see the horse’s knackers, such was the odd angle. Bacchy muttered into his pint a derisory comment about “the Oaks being for fillies, Davoski”. Yes, yes, I know.

We were in good company over here. A dead ringer for Kid Creole and at least two of his Coconuts wandered past a few minutes later. Floppy fedoras, white tailored jackets and bright neckties. Maybe they were the lookey-likey entertainment in a corporate tent later. They left before the last, accompanied by tuneful strains of ‘Oh Annie, I’m not your Daddy’ from our approximate location. 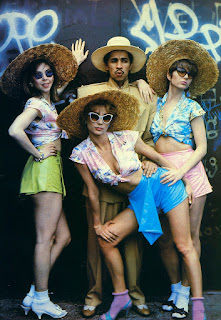 The Doom Bar bar was housed in a polished aluminium airstream caravan conversion and stood next to it was a little two-wheeler extension purveying German sausages. Perfect to wash down the beer, though the frankfurter and chilli combi I opted for was perhaps unwise. The bratwurst would have been a better alternative.

Later on in the afternoon, Bacchy unveiled his carefully honed technique of minesweeping unwanted and discarded corporate booty. His first sortie turned up a bottle of Faustino IV vino tinto from under the noses of a gaggle of lairy city bankers. I couldn’t for the life of me work out how he was getting away with it. After the last, I played his wingman, stood as a diversion near a bin full of expense-account fizz, pretending to text. I was so engrossed in my role that a good few seconds had passed before I clocked that Bacchy had rejoined the other two with a half-full bottle of Prosecco sticking out of his jacket pocket.

There was no such smash and grab on in the races. A winner in the first on the head-bob for me and Bryn suggested the makings of a good day. That was as good as it got. I’d shouted out Legendary Lunch as the winner about two furlongs from home. Ridiculously early. Blue Jacket screamed down the outside  and looked for all money  like he’d won. The replay confirmed that it was the Hannon horse that had held on by a lucky short head.

The rest of my selections ran to a similar script in so far as they made much of the running, but unlike the Lunch they failed to hold on. Muggings aplenty. What About Carlo, Custom Cut and Stamp Hill in the last all fared similar fates. Most achingly, Architecture, my nap of the day, was beaten in similar fashion. Frankie pulled the Hugo Palmer filly out wide with two to go and set sail. Once again I was screaming her home as the winner way too soon, jumping around like a skittery novice. The odds on favourite, Minding had met early trouble. Once Ryan Moore got her organised she mowed down Architecture with alacrity. Bacchy looked at me and said, “What’s the matter with you Davoski? Calling these horses the winners too early?” I shrugged. "Still in national hunt mode. Everything happens too fast on the flat for me!”

If I was in near-miss territory, Nick was smashing in to the bullseye. “Imshivalla will like the soft ground” he declared, nose firmly in the RP give-away supplement. Richard Fahey’s charge galloped home unopposed at 25/1. Sensational scenes. Bacchy was at it as well. Smuggler’s Moon taking the Surrey Stakes at 14/1, eased down before the line.
By the time we left, we were all a little wobbly. Nevertheless, I was staggered that no-one wanted to go to the funfair beautifully and invitingly laid out before us on the heath. We had been talking up the rides so much, I just thought it was a given. I struck out across the grass and realised no-one was with me. “I don’t really think it’s a good idea, do you?” said Bryn, with his sensible parent face on. 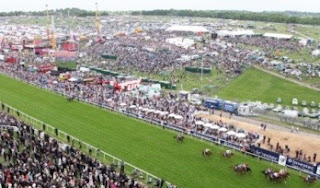 Instead, Bacchy and I headed for the curry house whilst Bryn and Nick went off to Epsom BR. A curry made not have been a good idea either.

It started off so well, chatting to other racegoers about the day. I even gave the manager a pukka tip for the Derby. “Harzand”, I said. “Dermot Weld is serious about this one.” Hope he remembered. Hope Bacchy did, or I’m gonna be on the end of some more aftertiming slander.

The arrival of the food, bizarrely, inclined us into a steep dive. I contrived to knock the naan bread onto the floor as I reached over for the lime pickle, which Bacchy had typically been hogging. Being the gent he is, Bacchy attempted to retrieve the naan. Still sitting in his chair he lunged and tipped in one smooth motion. A fall flat on to his face was narrowly avoided by him planting a spread palm on the floor. That hand was now supporting the weight of his entire body, tilted at a geometrically pleasing 45 degrees. He was trapped. One move of his hand and he’d be over.

Once I stopped laughing I stood up to help him. I tripped on the metal naan bread tray and lurched forward into him, almost knocking him out of the chair. That’s when the waiters came to rescue us. Not even offering up the winner of the Dash would have saved us then.

We made it safely to the right train, going the right way. A minor achievement, though as Tattenham Corner is the end of the line, conditions were overwhelmingly in our favour. Bacchy, sorry to report, had completely zoned out by this stage. He muttered something about an ambitious plan to meet his wife and daughter in town. A long odds-against scenario, I reasoned clearly (even in my inebriated state). I looked up, and after a bit of frenetic texting, Bacchy was soundly asleep with his head resting on the back of the seat in front.

He didn’t move until Clapham Junction. At which point I had to wake him so that I could clamber passed and get out. “Top day Davoski. Christ I’m wankered.” His blurry, half open eyes struggled to focus on me. The crimson blotch on his forehead  where he had been leaning on the seat completed a particularly debonair look for a classy Epsom Oaks day.

For my part, Mrs A tells me that after I landed home in a wide-eyed state, I announced in a booming voice, with animated gestures, at many and regular intervals, how lucky I was not to be too pissed after all the alcohol consumed during the day.

The next day, I registered through fuzzy receptors that Harzand did indeed win the Derby and that I had expunged the various betting and sundry expenses of the previous day. It remains unlikely that I’ll be back to Chillies Contemporary Indian Diner of Tattenham Corner to crow about the result.