We know because we’ve seen a couple this week. Some have a bit more credibility than others. At least Nine Below Zero had the wit to turn up with their classic formation.

NBZ had their high water mark in the 1982 when they were all over the telly, including a cult claim to fame, performing ‘Eleven Plus Eleven’ on the very first episode of The Young Ones. I just about remember it, though at the time I was far more impressed by the hilarity of Vyvyan’s random violence and Rick’s empty anarchist tantrums.

They split after that album (NBZ, not the Young Ones – that took another series). It was Gary that put us onto the trail of their ‘80’s-edition resurrection. We were blathering away about music at our recent curry night and he told me the band were out to celebrate the 35th anniversary of the first album. I said it was a no-brainer and we had to go. The deal was sealed with another London Pride.

Tim counted himself in as well. An old punk by instinct, but he loves a slice of well-honed r’n’b as well as anything. Gary just likes anything good. I don't think I've met anyone with such an embracing taste.

We left the pub research to Tim. Maybe this was a mistake. Of the three he proposed, one looked like the place you'd get stabbed if you wore the wrong t-shirt (his partner refused to go in there); one was somewhere near the Old Street industrial estates (not so handy for the gig in Islington) and on that basis the final option became a self-selection.

The Island Queen by the Grand Union canal was indeed a decent boozer. A high ceilinged gin palace with plaster mouldings, dark marbled pillars and glass Victoriana aplenty. However. Isn’t there always one of these? However, in common with practices I’ve bemoaned elsewhere, all the tables in this pub were reserved. I found one which we would have to vacate by 7pm in favour of ‘Steph’. I was still huffing and blowing when Gary walked in.

He was not the least interested in my bleatings.

“My office was under siege! It was surrounded by angry students!

There had been a demo march earlier that day organised by the National Campaign Against Fees and Cuts. It seems that they had strayed off their course towards Trafalgar Square and detoured up Victoria Street. Gary works in Business, Innovation and Skills, the Government Department responsible for further education. A highly appropriate target for student wrath.

“Luckily I was on the right side of the embargo due to a lunchtime excursion to the Laughing Halibut”.

A moment’s pause to respect the finest chip shop in Westminster.

OK. On with the story.

Gary was returning from his battery feast when he saw about a thousand students descending on the building. The front doors had been closed, locked and shuttered. Security told our hero to ‘go round the back’. Tradesmen and all that.

“In the time it took me to walk round the building, something had happened because those doors were shut as well and Security were going mental.”

Some protesters had evidently got through the entrances and into the office. Gary was told that the building would be off-limits until every demonstrator had been tracked and ejected/arrested.

It was just by luck that Gary had taken his phone and wallet (containing the gig ticket) with him. Even by the early evening, staff were only allowed to leave the premises in small batches.

Tim walked in sporting his leather jacket. Clearly he meant business. We had another pint of Timmy Taylor’s during which Gary brought him up to speed with the demo (where Tim and his jacket would have fitted in well - about 20 years ago). I started going on about table reservations again “that don’t even seem to be for people who want to eat, for God’s sake. I could just about understand that. What. Is. The. World. Coming. To.”

A look flashed between Gary and Tim along the lines of ‘let’s get him out of here’. “I could feel your tension”, said Tim, sensitively (the man in the leather jacket).

Next stop was the Earl of Essex, literally round the corner. This was a proper pub. Yes, it had been gentrified with matt khaki paint and robust Scandinavian furniture, but the place was all about beer! We found standing room by a thousand-litre mash tun and sampled a few brews advertised on the beer board. A beer board! Genius!

There was nothing much below 4.5% on there, some pub-brewed and some shipped in. Just as well that we lurched out of the establishment when we did. The band hit the lights smartly at 8.30pm and lurking for another beer would have punched a big hole in the set.

The Academy was reasonably full and reasonably cross-age/cross-gender. The review is here in full, though we all thought that a pretty decent slab of high energy rock and blues had been served up. I was of the opinion that the band fell away a bit towards the end, but Tim thought they were only just hitting their stride. We all reckoned there were too many cheesy covers. Good stuff though. And plenty of life in these originals. 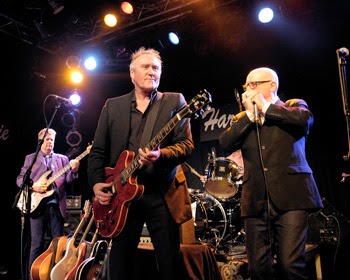 Sadly, the same could not be quite said of The Yardbirds a couple of days later. Only two originals remain in this iconic blues outfit and one of those hadn’t played with them since 1963, before they had even cut a disc…!

When does an original outfit become a tribute act? I’m not sure, but The Yardbirds are not far off. I suppose whilst Jim McCarty is still thumping the tubs it is legitimate act. Original singer Keith Relf is dead so the odds on him making an appearance are slightly bigger than one of my ante-post outsiders.  And the chances of any of the band’s mega-guitar luminaries having nothing better to do than pitch up at Shepherd’s Bush for a jam are slim and none (and Slim is out of town). Clapton, Beck and Page. What a triumvirate.

Those glory days are over. Unlike the venue, which is having a new lease of life. Bush Hall was built as a variety theatre in the great Victorian swell of such things. And like so many similar buildings it fell on hard times in the latter half of last century.

The stunning restoration of the theatre is almost a symbol of the rejuvenation of this corner of central London. Its ornate ceilings, chandeliers and plaster cornices witness conferences, weddings and film shoots as well as and gigs. …Except that the building is at the unglamorous edges of Shepherds Bush’s Uxbridge Road, whilst the posh new glass and steel stuff is crammed around the Westway flyover.


Mrs A and I had time for a bite to eat before the gig. I was getting a mite nervous by the way we walked so swiftly past kebab houses and Mediterranean restaurants that I could barely press my nose up against the windows. No fear, though. We hit on a low key, high quality North African joint near the venue called Abu Zaad for some rather fine spatchcock chicken and kofta kebabs.

The support act, Some Velvet Morning, were known to Mrs A through their drummer Rob who by day is a music business royalties man. His evening role could be even more rewarding, judging by the early signs of this set. The band certainly sounded a bit fresher than The Yardbirds, who were good in patches, but battled bad sound all night.
“Don’t be too mean about us!” said Rob on the way out. I don’t think I was. Here’s the review.