Runs in the family

May 29, 2014
We dropped in to see the sisters on the way oop north. Auntie Betty was in predictably fine form. She liked my trainers and I said she could borrow them.

“What size are you, Betty?”

“Well, you know, I’m a five over here, but a seven in the States. Yeah. My feet don’t change sizes. They just have a different number here!”

Classic Betty. Daughter No 1 was in physical pain, bobbing up and down with mirth. Betty’s been in fine form since she got here a fortnight ago. The first time we visited, she opened Granny’s door to us and with no fanfare whatsoever, shoed us inside.

“Come in, come in”, she said and flicked thumb in the direction of the lounge.

It was only when we were inside and she recognised me that she stopped.

“Oh my god it’s the Eya-atkinsons! I thought you were more nurses! It’s been like Grand Central in here with doctors and nurses coming and going!”

She clasped the girls’ faces between her hands in turn and said “You’ve changed so much. Gorgeous girls. I’m sick of looking at old people…”

We carried on north. Daughter No 1 is in the middle of GCSEs. So we did some spot-revision in the car. Biology. There were some shaky answers around the difference between sexual and asexual reproduction; and also around simple cell-splitting; but but more sure footed knowledge was displayed about what doodles her friend Katherine had added to the picture of the shark in the revision guide I was holding.

I texted Bruv to let him know what time we’d be there. That I got a reply represents progress. Text speak is not his forte. When Dad and Bruv looked after the girls recently, he texted them to say what time they would be arriving. He signed off with a ‘U.P.’ as in ‘Uncle Paul’. The girls thought this attempt at txt spk was spectacularly funny and marvellously off-point. Clearly Bruv is not down with the kids (in the way that his older sibling is, obviously). Daughter No 2 was so tickled that she took a photo of the text for posterity. I think it was the grammatically correct use of the fullstops that sent them over the edge.

Last year, Daughter No 2 was at home when she received a text from Grandad’s mobile phone. Except there was no text. Just a blank message. She found Mrs A and said,

“Mummy, I think Grandad just tried to text me”.

Mrs A looked and thought she’s better phone my Bruv.

“Oh, I see” said Paul. “I think that means he’s ready to be picked up after his haircut. I told him to text me when he was done. Better go, thanks, byee”.

Dad and Bruv were in good fettle all weekend and we chilled nicely. Bruv was full of subtle gloating because, once again, he’s thrashed me in the forty to follow comp.

“Just been looking at restaurants, Dave. Some nice new ones opened up in York”.

Bastard. I was winning all season until he found a 33-1 winner at Cheltenham. He then had a gaggle of other medium to massive winners and finished with a level stakes profit of +49.61! He didn’t back many of them with real money though. Ha!

I had to have a go at that massive Tote Scoop 6 on Saturday afternoon. When I found Bear behind, the 16-1 winner of the first leg, I succumbed to excitable tweets about my prospects for the rest of the afternoon. Which were extinguished in the very next race. Of course. My solitary £2 line also unearthed the winner of the last, neatly bookending four unplaced losers. At least I backed that last winner, Chatez at 8-1. It may not be the £1.34m that the Scoop 6 winners trousered, but under the circumstances I settled for £40!

Saturday night was lovely. At Christmas, we had booked Dad and Bruv on the North Yorkshire Pullman for their present. Like all good gifts, they need sharing. We had booked it for this weekend on the basis of long, light nights, and we four were accompanying them.

The Pullman Service is very popular and there is a real sense of occasion about it. Stepping back into the Golden Age of Steam and all that.

Diners began assembling on the platform and took snaps of each other in their gladrags. We did the same. Nice to make an effort once in a while. 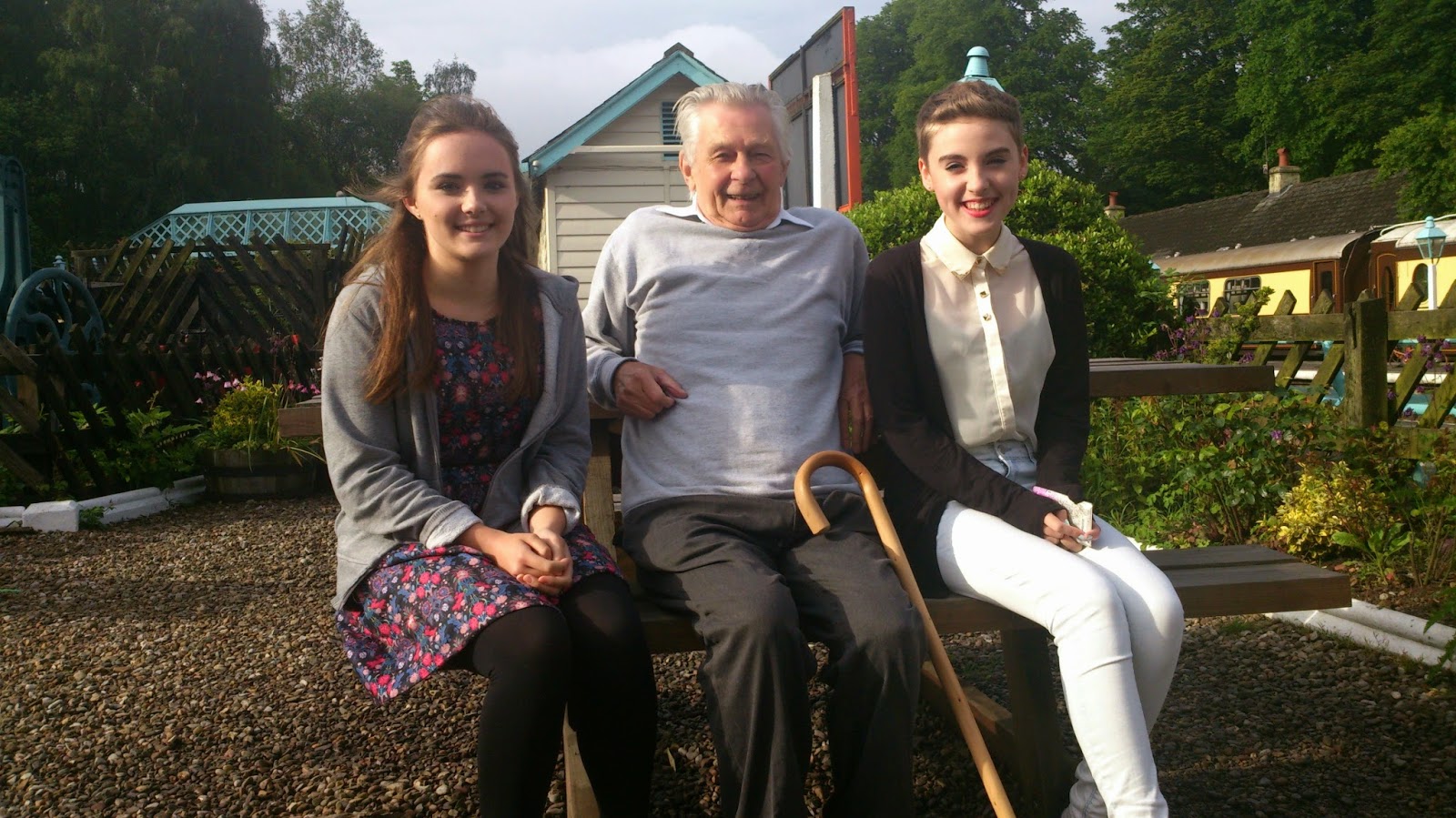 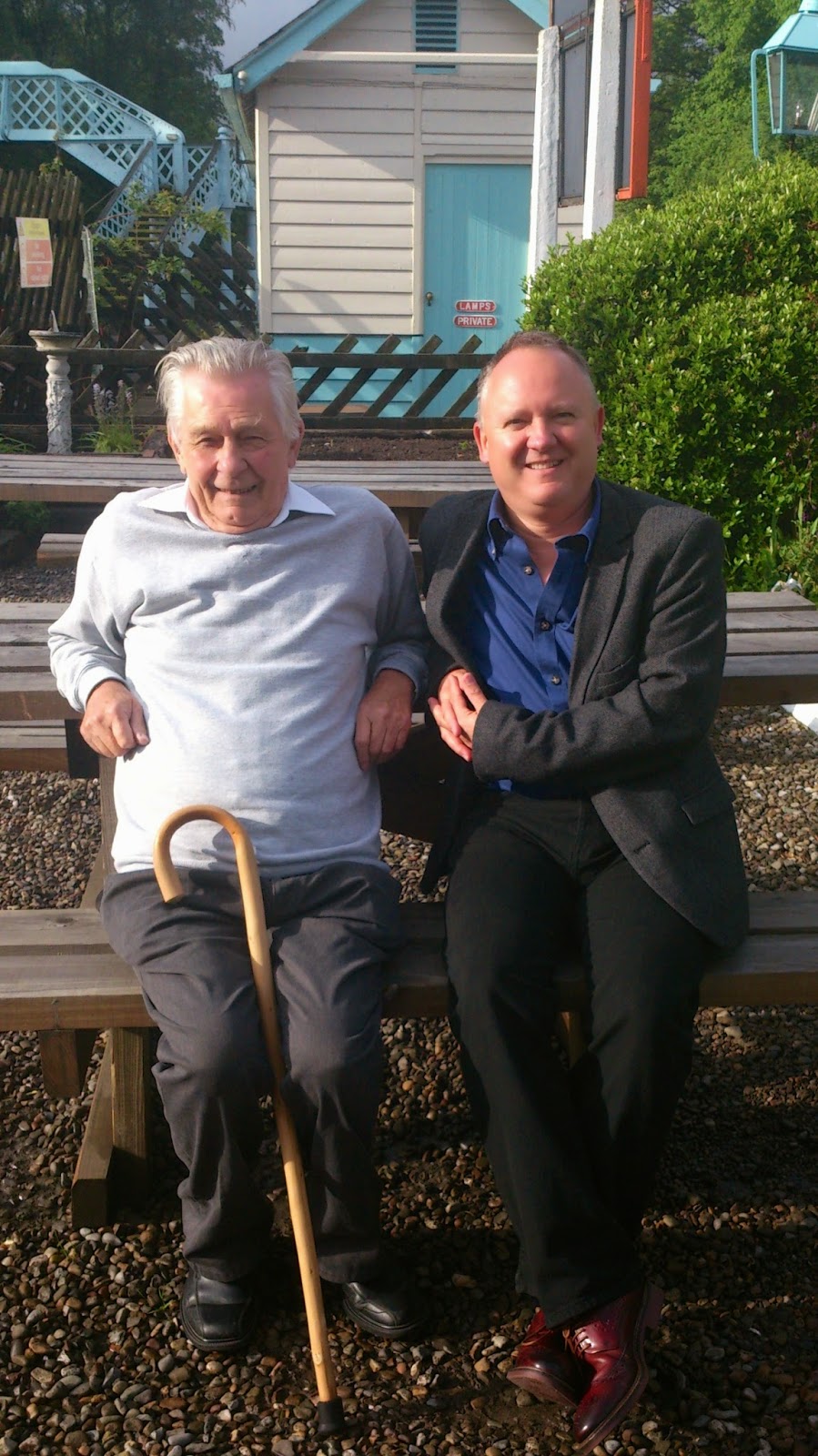 We found Robin, the vintage restaurant car,  and were welcomed aboard. I told the girls how I used to work aboard this service once a week in my post ‘O’ level Summer. Bruv remembered how I always missed Moonlighting, the best TV programme of the week. The girls were a little sceptical.

“You were doing all that waiting and serving?”

“Ah, no. I was confined to veg peeling, washing up and floor mopping”. 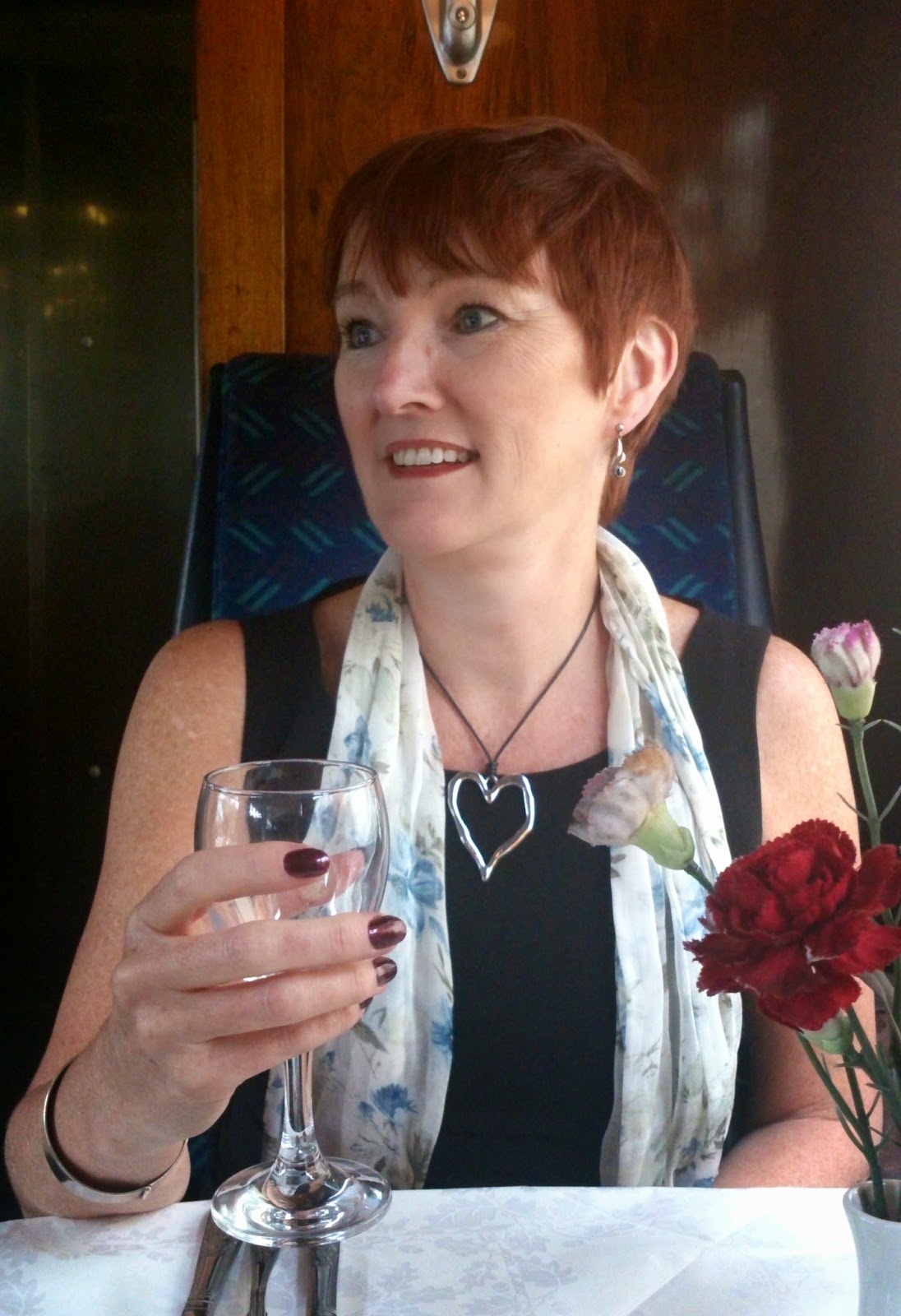 The excursion was blessed with great weather despite showers earlier in the day. Grandad pointed out the house where he lived, close by the track, for about 12 years (now up for sale); the steep, rough bank where he kept goats (a family legend has it that he tried to milk a billy, but he’s always denied it); and the tunnel where the family sheltered from air-dropped Nazi 2000-pounders.

Over the starters, the engine heaved and spat up the Grosmont incline and then passed the beauty spot of Darnholme. Over the soup, we trundled through Fen Bog where the tracks were originally bedded-in by George Stephenson onto timber and sheep fleeces. Over the main course, we snaked gently through Newton Dale, which renders redundant any trip to the Grand Canyon. Head to the Moors instead. Tonight the low sun angled down the slopes and illuminated clumps of bog myrtle and cotton grass, early bell heather and bilberry. 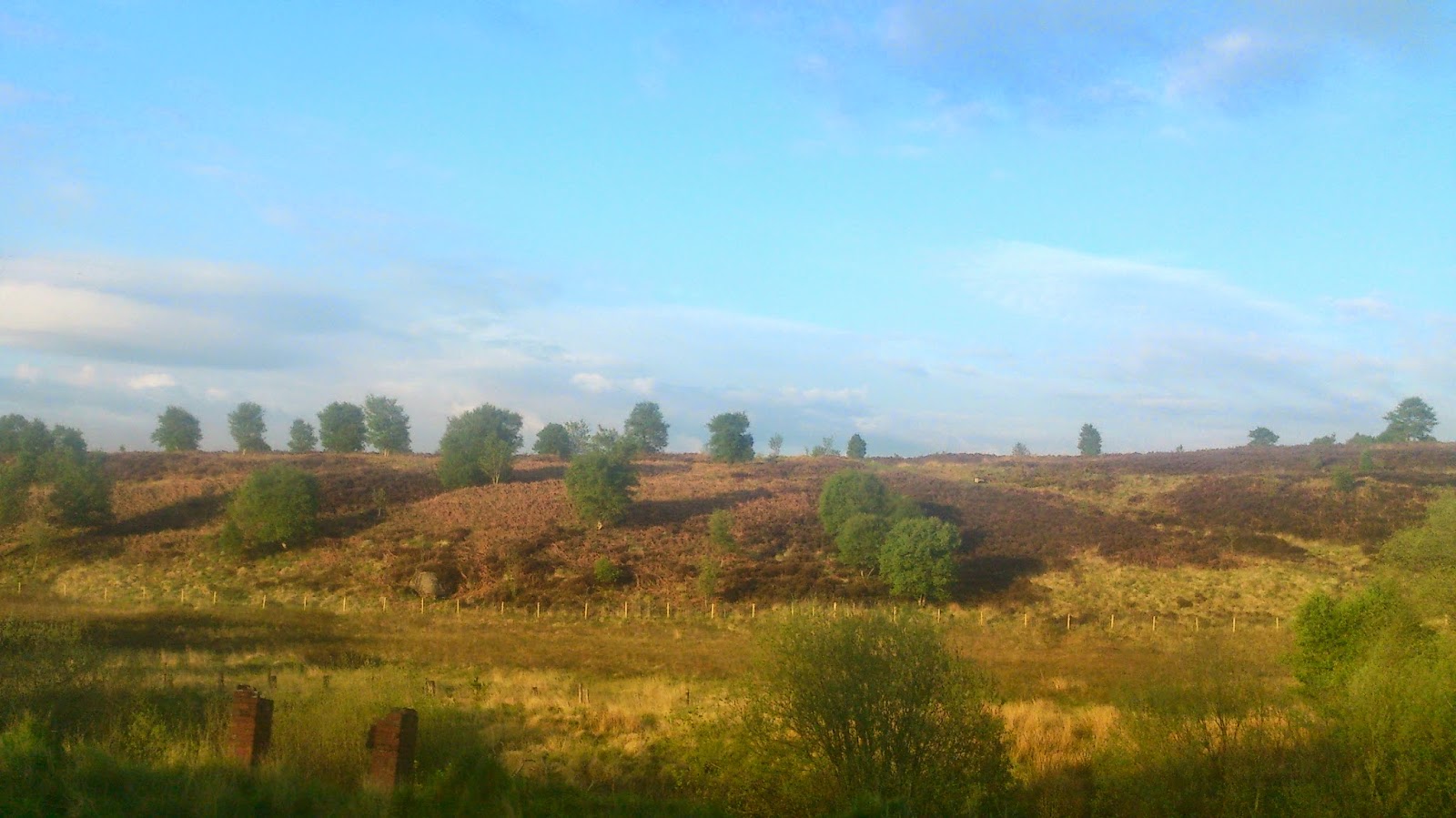 Perversely, we’d had to drive up to Grosmont to board the train. We watched the engine being watered, stoked and then coupled on to the other end, ready for the climb back up to its Esk valley departure point. Bruv said we had time to nip to the kebab shop for a doner each before the dessert course.

There are Pullman services that operate out of Pickering – which of course would make much more sense for us – but only on Fridays and in term time. So only useful if we leave the girls behind. Which of course is a thought… 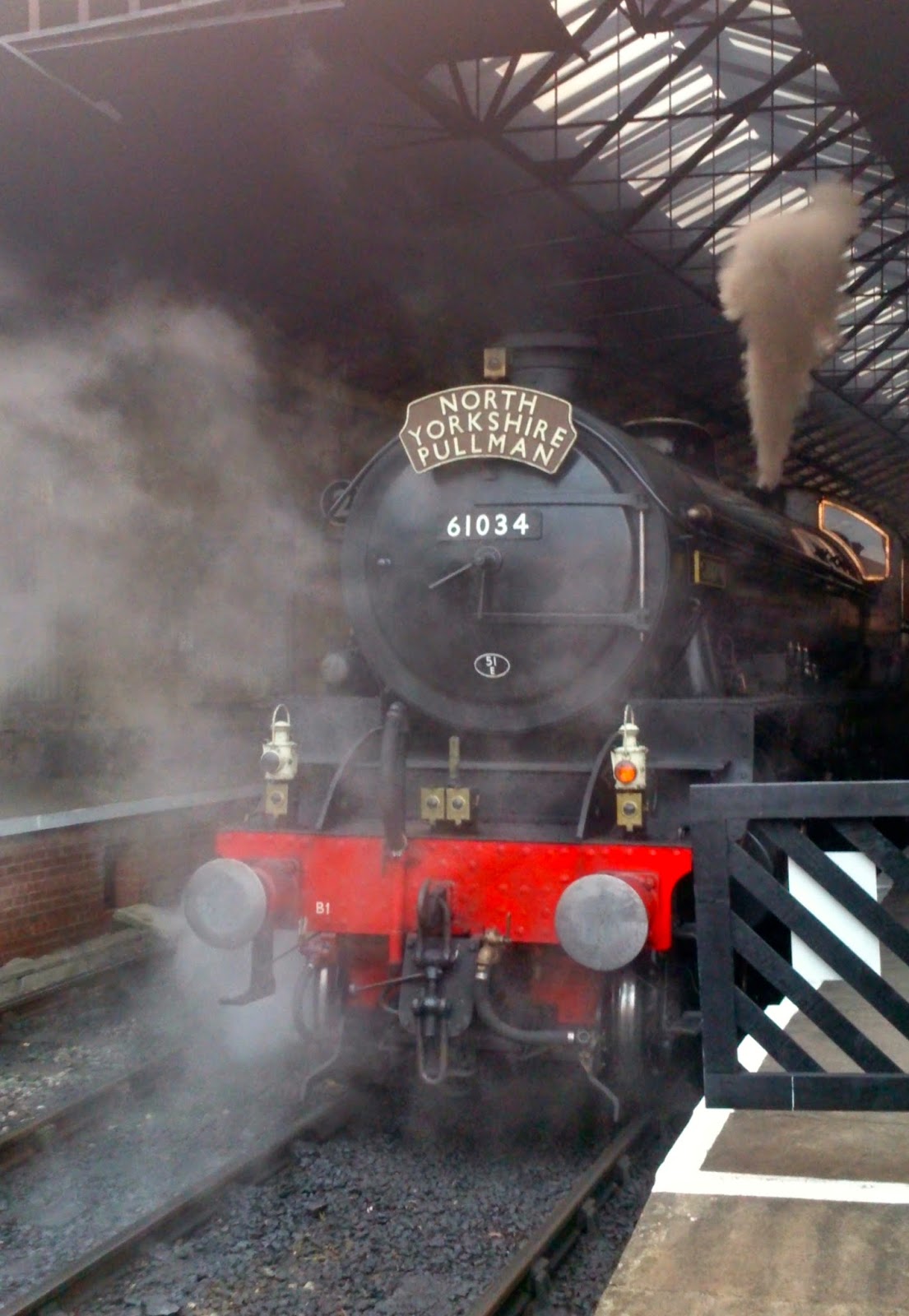 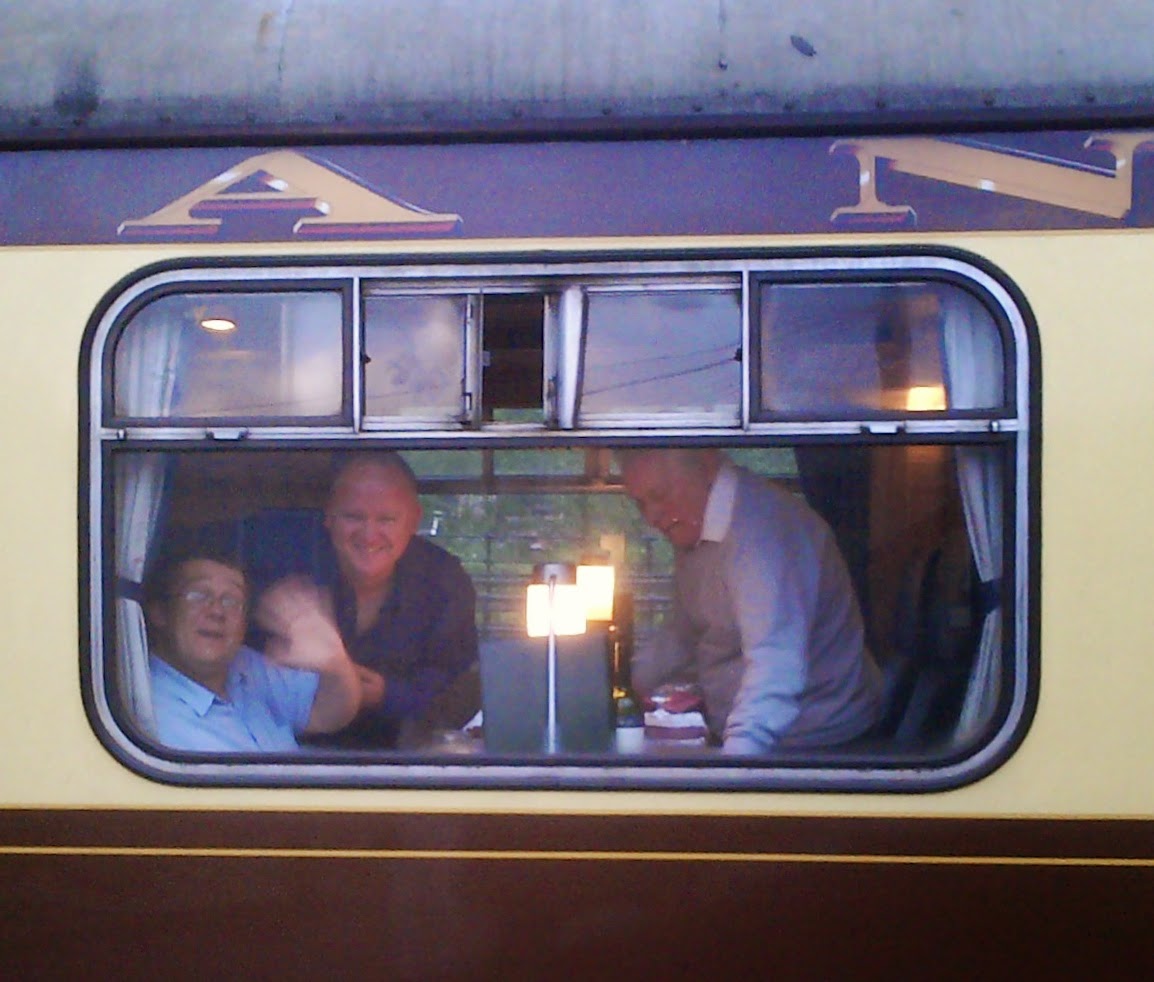 Whilst stretching our legs, we nearly tripped over the wreckage of the 40-something’s party spilling out of the viewing car at the back. Two tottering, high-heeled blonds were supporting a third hanging limply between them. They were making for the loos, presumably for a vom, just to make room for more. Quality stuff. An authentic Golden Age of Steam experience.

Dessert and coffee were served impeccably by the stewards as the light leached out of our moorland backdrop. Sublime.

Keeping it in the family, Uncle Ian, my late-Mum’s brother is a taxi driver. He met us at the station and drove us home through thick fog. There had been none of this gloop in the valley bottoms. Ian is a scream. He has just hit 65 and still delivers the driest one-liners of anyone I know. “Aye. Sue said I should retire now” he drolled. “I said to her, ‘Why? I’d only have to spend more time with you’.” Deadpan.

Back home, Grandad realised he’d dropped his glasses in Ian’s cab.  Five minutes later, Ian was at the door, drenched and holding out Grandad’s specs. Sun, fog and now rain.

Next morning Bruv took us up to Danby Lodge and then Danby Beacon on the way to collect the car from Grosmont. The latter is a part of the Moor I haven’t been to before and it looked dramatic under a shower-filled sky. 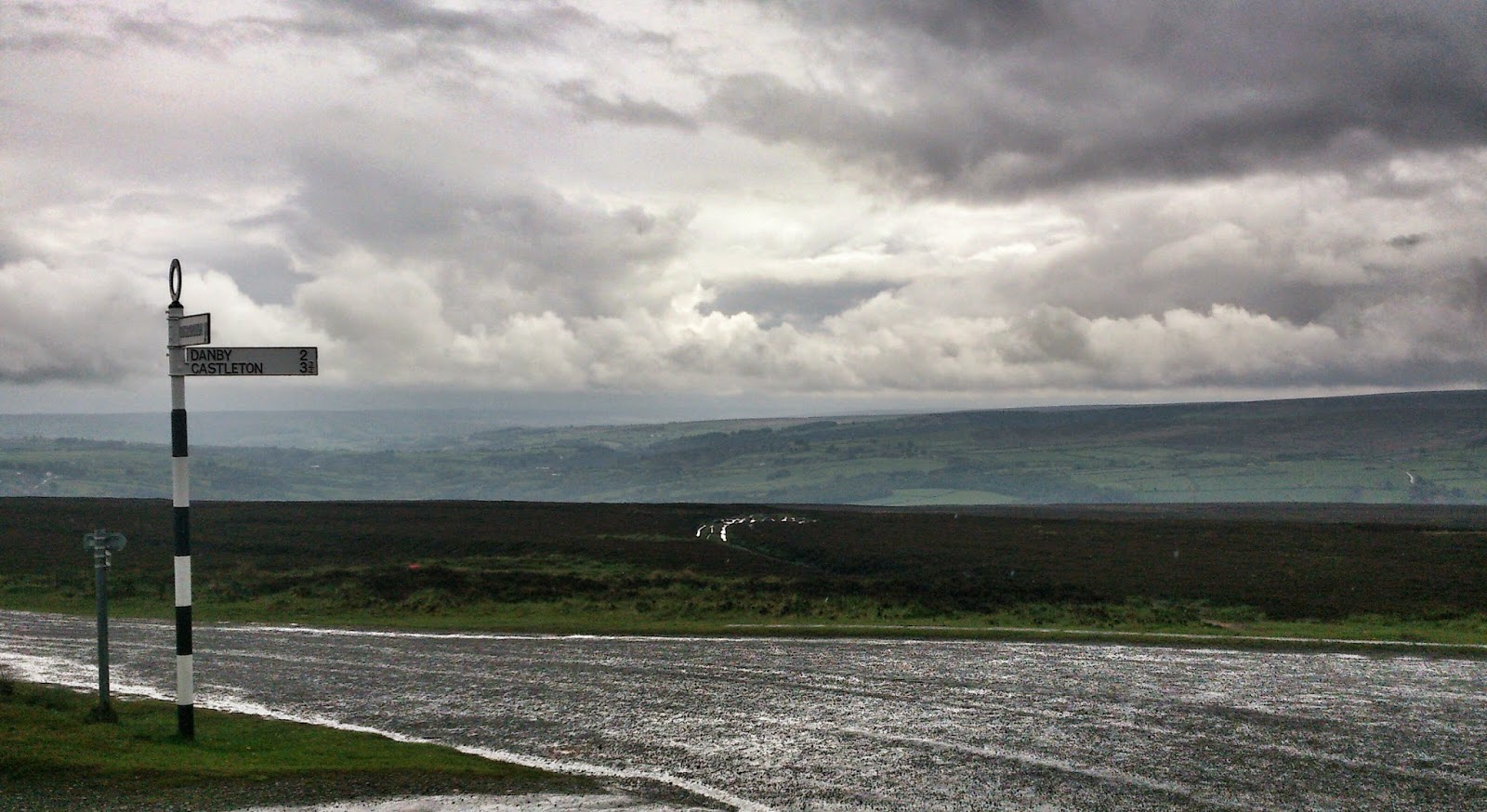 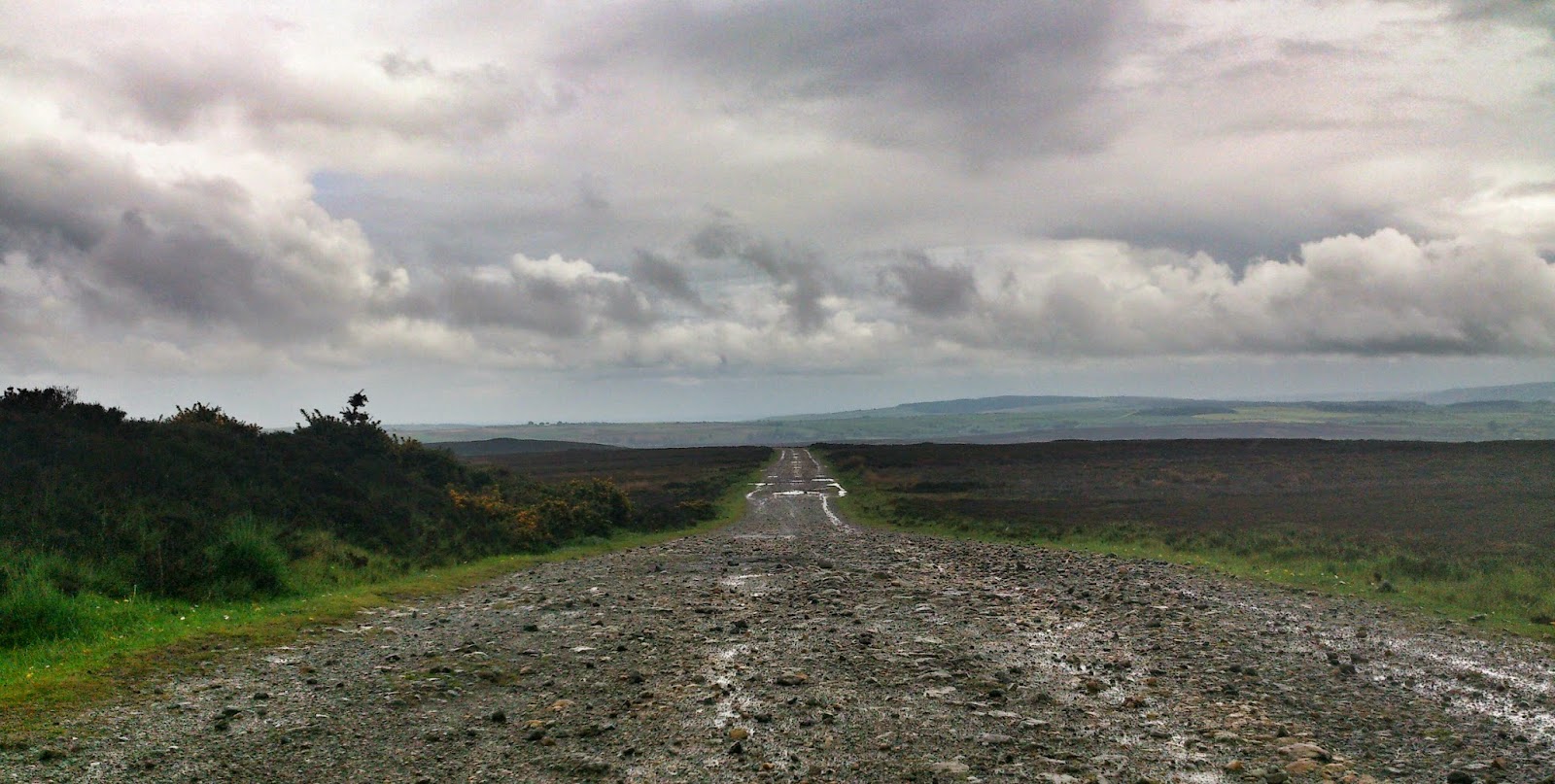 The trip back was also wet. This time the showers had joined together and the M1 was grim. In stark contrast to the rest of the shiny weekend.