Mad as a Moose

January 12, 2014
The New Year seems to bring a step change in Cheltenham Festival counting down. The crunching sound you hear through your laptop speakers is the mangling of website gearboxes. Electronic media seems to have cranked from 1st to 5th in an urgent drive to pump out Cheltenham stories. I’ve lost count already of Festival stories about jockey bookings, vague and uninformative running plans, Championship race entries and betting offers.

So here’s my preview…

Not really. (But I am weakening.)

In amongst the Festival focus, I was intrigued by the reporting of BHA’s decision to ban Mad Moose from racing.  Nine months, at least, on the sidelines for the 10-year-old who has made a habit of refusing to race. The BHA said Thursday's ban was put in place to protect punters.

He blotted his copy book most recently at Sandown during the Grade 1 Tingle Creek Chase in early December. We were there. I have to say, a couple of our gang backed him at the outrageous prices on offer. It was a bet to nothing. A bet on whether he races or not, more than whether he wins or not. The Moose’s reputation goes before him and we all knew the deal.

Sam Twiston-Davies, aboard the horse trained by his Father, made every attempt to get Mad Moose to take part, as did the handlers down by the tapes. Although the recalcitrant racer did eventually make a move, he hung outrageously and fought every yard.  He was pulled up before the first and the reaction in the stands was one of hilarity and amusement. No one around us was tearing up slips and turning purple with rage.

This was his seventh offence (i.e. refusing or being reluctant to race, and being significantly tailed off at the start) in the previous 14 months. But he’s also won seven times. 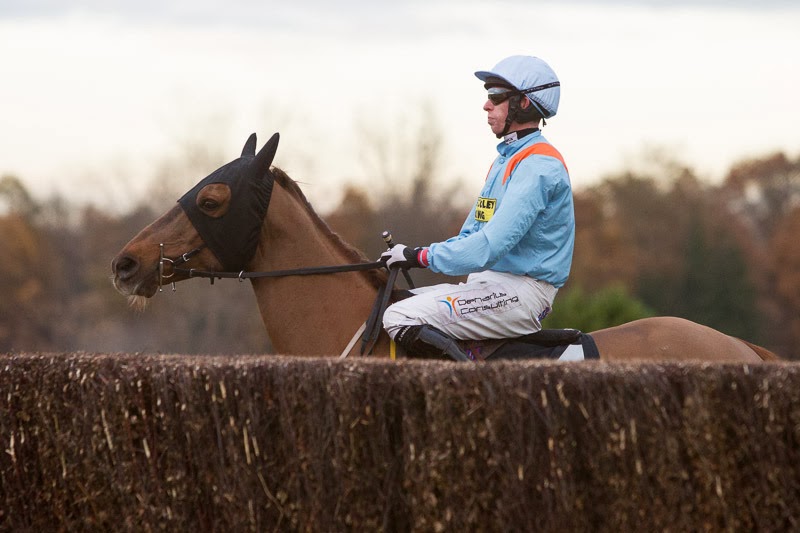 Sam Twiston-Davies, who has ridden the horse to win five races, has subsequently criticised the decision.

"It's sad he's got nine months off when a horse who takes steroids only gets seven months”. Fair comment is that. “[The BHA] said it's because of the punters but everyone knows Mad Moose. If you were to back him you'd only be having £1 each-way in the fact he might jump off at a massive price."

And that, for me is the nub of the argument. Betting is a gamble. That’s the point.

Twiston-Davies draws an interesting comparison in punishments between blatant cheating on the part of connections and simple (or perhaps complicated) bloodyminded horses. As one punter has commented this week, “A lot of the argument from animal libbers is that horses don't have a choice. Mad Moose is a good example that a moody horse will do as it pleases.”

Protecting the punter might actually be a spurious argument. Coral’s James Knight makes the point that Mad Moose’s loyal backers recorded a healthy profit of +£20 to £1 level stakes in 2013.

James, in his weekly column, goes on to say:

“Rather than ban the horse, why don’t the BHA simply follow the lead of the tobacco and alcohol industries and provide people with a health – or in this case a wealth - warning about the horse.

All it requires is for horses who have tried the authority’s patience on, say, three occasions to be flagged up on the racecard as potentially dodgy betting propositions.

The only issue is finding a suitable letter to denote such an animal – a big, bold capital X on the card should give people enough of a clue.”

If protecting the punters really is the motivation of the BHA, it should treat these moody dogs and feisty rogues as non-runners. When horses refuse to start, face the wrong way or are left in the stalls, punters should get their money back. It would mean a change to the “under starters’ orders” rules. But nothing insurmountable for a body so adept at rule mongering and bureaucratic verbiage as the BHA.

Sariska lost me a few quid (as well as winning plenty in that rough old Oaks of 2009) by refusing to come out of the stalls towards the latter end of her glorious career. Even then, there was a modicum of comic value in Jamie Spencer wriggling and flailing for all his worth on top of a mare stood stock-still and disinterested in her berth. By anyone’s understanding, that is a non-runner.

Bookies might moan a bit about lost revenue, but is the massive value really, undeniably on offer to compensate for the risk of horses adept to plant? Yes, of course with a beast like Mad Moose. Yet Sariska was 85-40f and 7-2 on her last two non-starts. I’ll do some research…

Whatever. Horses refusing to race are not new.  Somewhere on my phone I have a text from my mate Bryn who smashed out an expletive ridden, mis-spelt volley of abuse after Bellator didn’t fancy the King George at Kempton one Boxing Day. He had done that once before and did the same next time out. It was his last race.

James Knight also unearthed an excellent blog from Chris Cook highlighting some frustrating racehorses. Not all none starters. A few of these are none finishers too.

Delighted to see Quixall Crossett heads the list, the famous never-winning horse to whom Mug Punting is dedicated.

And also a favourite of mine from the late 80’s, Vodkatini. “At Kempton he gave up 20 lengths at the start but still managed to hit the front by the third-last.” Legend.

Don’t ban them. Let’s keep a little of the humour and unpredictability in the game.