A change of pace. Not that life had been so speed-spiked as to induce nosebleeds in La Vinuela. Quite the contrary. But the stay at the Los Castillarejos rural apartments immediately induced a sense of inertia and indolence. That had always been the intention for the last three days of our Iberian sojourn. Our host, Poalino offered us the most effusive welcome of our trip and couldn’t do enough to ensure our stay would be exactly what we wanted. He provided taxi numbers, restaurant recommendations and a demonstration of every implement and gadget in the apartment. All with barely a word of English.

With its back to the Subbetican mountains and at an altitude of 1200 feet, the accommodation gave a near 280-degree vista over buff hills cloaked in a green-grey camouflage of olive groves, with the silhouette of more rugged upland on the horizon. 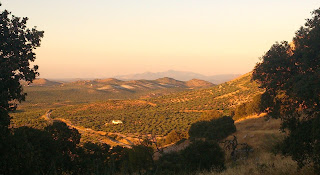 The panorama setting on my camera took a serious pummelling.

Sometimes it’s the simple things that strike the right chord: we loved the little infinity pool that played an optical illusion of swimming towards the lip of steep valley. And I think the view improved my pool handstand skills, too.

Sat on the sun terrace one afternoon, sipping something restorative and completing a hand of rummy, we saw a massive and glorious Bonellis Eagle circling and then swooping low over the hillside as if to pluck small children out of the pool for tea.

The apartment was situated between two crag-hugging settlements, Luque and Zuheros. We headed out to the former on a scorching evening to find provisions.  Luque appeared to be a small, functional and solid town, devoid of tacky tourist traps. Its traditional character was reflected back from every whitewashed closed-up building. God fearing folk had shut up shops and bars in respect of Saturday mass and we couldn’t find supermercado anywhere. The cicada buzz echoed around empty streets. Tumbleweed blew across deserted plazas.

And then we spied an open doorway under the ‘officio turistico’ sign. Of all things to find here, tourist info had slipped down my list of expectations, let alone an open office. We poked our head inside and a young, smart, hirsute man in a pale blue short-sleeved shirt promptly emerged from the room next door and addressed us in English. After some polite conversation about the town’s attractions poring over the street map, we asked about supermarkets on a Saturday evening. “No.” he said. And then thought, looked to the ceiling and said, Ah…Ah…no.” More hopefully, he added, “One moment. I will ask my wife.” He pulled out his smartphone and texted her. We inspected the map again and made more polite conversation about the dominance of the castle and the squareness of the church bell tower. Then his phone rattled and once again he said “Ah…no. Baena is the nearest”.

We headed back to the car in preparation for a reluctant trip to the nearest big town. Crossing the vacant square, he called after us and ran over clutching his phone. His wife had remembered a supermarket over the other side of town that just might be open. In giving us vague directions and imprecise opening times, he apologised and explained that this was not the nature of questions he was usually asked. We were extra-ordinarily grateful to him and his wife, and made smartly for the shop, departing a scene that just may have been the most exciting thing to have happened on a Saturday night in Luque for some time.

We visited Zuheros more often and for longer. A couple of kilometres in the opposite direction, the village attracts a compelling introduction from the official guide to Cordoba province:

“The white-washed village of Zuheros lies at the foot of rough, ashen, rocky ravines. It appears to have arisen at the end of the 9th century, when Banu Himsi soldiers erected a castle on inexpungable rocks and settled in the area.

From the viewpoint, the village appears as a disordered stack of dice, formed by houses with ochre rooftops and darkened windows that appear like sleepy, half-closed eyes.”

Great stuff. And I thought I could do flowery. Properly gorgeous village, though. 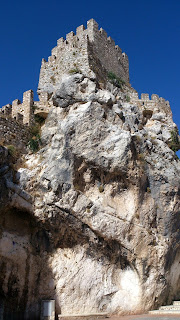 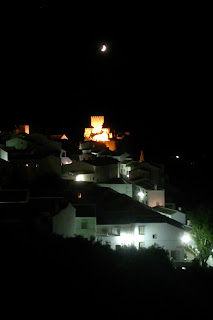 Apart from a few shops randomly dotted around the place, we also spied a castle, a church, two museums, a hotel, three restaurants and four bars. Despite them all being open at varying times and on different days, we made a fair stab at working our way through all of them. The Museum of Customs and Popular Art was a scream. Antonio, in pretty good English (better than my Spanish), gave us an enthusiastic and sweet guided tour round an eclectic collection that embraced furniture, medical and pharmacological artefacts, ploughs, hoes and olive oil machinery, and reproduction 19th century bedrooms. All housed in a splendid 19th century mansion erected in the colonial style – totally out of keeping with anything else in the village – by a rich Venezuelan ex-pat.

Dead opposite was a fantastic restaurant, Meson Atalya, where we passed a couple of happy hours in the care of friendly and knowledgable proprietors who explained every dish and even plucked a solitary lemon from a tree in the courtyard for our neighbours. Mrs A methodically tackled an intimidating plateful of local cheeses, including goats milk cheese contributed to, no doubt, by the herd we had seen cajoled through the lanes below the castle an hour earlier. I attacked a bowl of rabo de toro – stewed bulls tail  - and we shared dishes of (more) baked cheese, iberico ham, croquettas and enselada.

The half hour walk back along quiet roads was canopied by a sky deep with drifts of stars that became a canvass for a spectacular meteor shower. I had never seen a single shooting star before that night, but was rewarded by four or five orange, white and blue tailed comets, blazing their trail (apologies to Mike Scott) across the sky; and a similar number the night after. The pool back at the apartments was equally as deserted as the roads. So another hour was spent in or on the margins of the pool gazing into the freckled heavens.

The restorative powers of the salt water pool were particularly welcomed by Mrs A. On our return from the village that evening, we were unable to open the metal sliding gate to the driveway.  No amount of joggling, jostling and general agitating of key and lock made any difference. We all had a go, in between standing around and looking foolish. I was eyeing the adjacent fence and said “We’ll be able to get over that. Easily.” Mrs A had clearly been thinking the same. She dropped her handbag, leapt up on the wall and began slinging an athletic leg over the top of the metal fence. I had meant to go first, but was beaten to the call. Impressively, she was over the other side in a mere jiffy.

Just then our curious gathering became illuminated by the car headlights of fellow guests also returning from Zuheros. Meanwhile Helen had jumped off the little wall on the other side and had fallen. She was sprawled on the floor, limbs scattered like ten-pins and was uttering a few well chosen expletives jostling with the odd painful groan.

The drop on the other side was much deeper than on ours and in the dark had caused a misjudgement. She had staggered awkwardly to her feet as the lady passenger of the car emerged. She surveyed the scene with unruffled élan and undid the gate in a trice. I was shrugging my shoulders and wagging the key in the air to indicate my difficulties. She made a few sympathetic ‘pfft’ and ‘tt-tt-tt’ noises (French, n’est-ce pas) before getting back into her Audi and passing through the gate. Any reaction she had to seeing the fourth member of our party on the other side was not noted.

Mrs A was not in the best of shape. Cut elbow, bruised hip and dented pride. The dip in the pool was sorely needed. Next day we saw what a lucky escape she had had. Close to the scene of the tumult were metal sprinkler heads and any number of sharp limestone boulders that could have done some serious damage. Evenso, the incident was enough to challenge all-time family record holder, Aunty Sue in the falling over stakes. At least for this week.

Daughter No 1 was beginning to feel that her Mother had developed a self-harming trait. Next day, observing her attempts to prise a recalcitrant cork from the corkscrew with a distant cousin of a meat cleaver, Daughter No 1 remarked, “If you slice your hand open with that you will have to drive yourself to hospital, you know!”

The corkscrew incident was safely negotiated and rather than the medical centre, Mrs A drove us back to Madrid. Strange how the plains seemed flatter and the views less interesting on the return leg. Was it only a fortnight ago?