I’m hammering away at the keyboard here almost as hard as the rain is hammering down on the sodden ground outside. The chances of the cards at Haydock and Ascot even getting underway are slimmer than a stickman on a diet, never mind completing. It’s 9.30am and its still dark.

We had some friends round for a pre-Christmas drink last night. It was a reasonably civilized affair, although the lopsided pyramid of dripping Doom Bar bottles outside the back door is evidence of a solidly sociable occasion. And the CDs piled up next to the stereo are cast-iron retro fodder: Neil Young & Crazy Horse, Bob Dylan, ELO, John Lennon, The Black Crowes, Ian McNabb. Nothing there that troubled the charts this century. Yes, we still play CDs. How passé! The Christmas party season starts earlier and finishes later, I swear. The good thing about being self-employed is the regular flow of Christmas events I get invited to. For the last three Mondays I've bumped into Patrick who lives up the road after I've stumbled off the train in varying degrees of festive cheer. Uncanny. We can go months without an encounter. "See you next Monday" we now cheerfully call on parting.

This Monday's bash had a neat twist on the Secret Santa idea. Instead of a name pulled out of the proverbial hat, we each had to make up a party cracker from a kit and insert a suitable gift. So after getting everyone in the house to help with my pathetic cracker preparation, I shot off to Corals to buy my gift. A win bet on Al Ferof for Boxing Day's King George. All the crackers were mixed up on the day. Eva won my gift and was delighted. "Inspired" she said. "Predictable" she'd have uttered if she knew me better. I won couple of pink geometry protractors. They'll come in handy...

Eva wasn’t supposed to know who the gift was from. Secret and all that. Except that she was sat opposite Julie, our Director, whom I’d bumped into the previous Saturday on Clapham Junction platform 10. I was going to Sandown for the Tingle Creek. She was going to an ice skating show with grandkids. There was a moment of mutual hesitation as we struggled to put familiar faces into an unfamiliar context. How we laughed. Anyway, when Eva was I querying the identity of the gifter, Julie nodded in my direction and said "David might know". What my Director thinks of her charity fundraiser's gambling habit is yet to be recorded.

So the very next morning, of course, Al Ferof was declared a non-runner. I told Eva and she was disappointed. I said I’d swap it for another runner. She doesn't need to know that Corals weren’t offering non-runner, no-bet (season of good will). And so I was quids down before the five-day decs were out. Eva will now be cheering on Cue Card. I hope she’s got powerful enough lungs to see him over the last half mile. Still, there are a few doubtful stayers in the field this year. I do think Cue Card has a good chance. As I did Al Ferof. But if Sir Des Champs turns up, he’s the one they all must fear. Long Run and his dodgy jumping included. They will both like the heavy going, but the whole field will need aqualungs and flippers if this rain continues to beat down with such ferocity.

I’m reading that clerks of the course at Ascot and Haydock are now uncontactable because they are slithering around their respective tracks, sinking in the mud and looking heavenwards. Abandonments move a step nearer, I fear.

Last week was one of dramatic highs and lows for Champion Trainer Paul Nicholls. His quivery emotion in an interview with Alastair Down on Saturday after Unioniste won the big handicap was all to with the unseemly and very public row with Kauto Star’s owner Clive Smith. The toothy Mr Smith had chosen a dressage career for the now retired legendary chaser, and this had upset the trainer and his team. It is the owner’s right to do as he wishes with the horse, of course. That’s not something old pumpkin head was disputing. Though it seems the way the decisions were made and subsequently announced had wound up the champion trainer beyond measure. He packed off Kauto to his new home with Laura Collett, a dressage rider of some repute and promptly stuck his bottom lip out.

The subsequent volleys of accusation and counter charge were highly entertaining. Who discussed what with whom…Where was the best home for the horse… Who loved him the most…it all added a touch of drama to an obviously emotional set of circumstances. Nicholls blubbed to Alistair Down about how embarrassed he was at the turn of events. And I believe he’s genuine in this. It highlights a unique power relationship between an owner who is often very distant but with ultimate control and a trainer providing constant attention and decision making but shorn of final responsibility. Mind you, plenty in racing will tell you that the power balance can often feel like it’s the other way round.

And then the news on Monday from his stable that both Al Ferof and Big Buck’s will miss the rest of the season. Never mind the King George, this throws the World Hurdle wide open as well. What is interesting about the withdrawal of the Nicholls’ duo is that neither of them budged an inch on betfair. The stable played it absolutely by the rules and didn't lay off either horse in the Long Walk or King George markets. BB was trading at about 1.57 at the time and would have been a simple target.

Compare this with behaviour of Henderson's yard where the price of his horses can ping-pong faster than a heart monitor before any word from the trianer. In Spring this year, Spirit Son drifted like a deflating lilo in a North Sea swell on rumours that he would not make the line up for the Champion Hurdle. Only when some bookies started suspending markets did Hendo declare Spirit Son a likely non-runner saying something like "it comes to something when the exchanges force one's hand". Charming, affable and twinkly he may be, but clearly the long suffering punters are well down his list of well-connected priorities.

Some tweets from the track just now:

“Never seen rain like it here in Ascot...don't know how the meeting is going ahead.”
“I’ve never seen the car parks in such a state.”
“Due to going concerns Santa has withdrawn both Vixen and Prancer from delivery duties. Elf of the course says deliveries will still go ahead.” 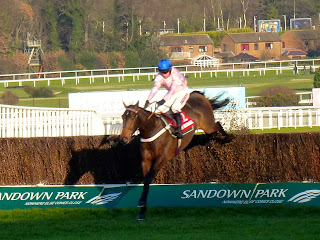 The Tingle Creek meeting the other week was a scream. I can’t say much proper punting was done. Partly because of sundry odds-on racing certainties and small uncompetitive fields. But mainly because of the rapid emptying of hip flasks and regular flow of refreshment from the Hogsback bar. I do recall collective sharp intakes of breath when Sprinter Sacre cruised up to Sanctuaire who had been cutting out a pretty nifty pace and slipped by as if cantering on the Seven Barrows gallops. Earlier we had started to debate the chances of Captain Conan giving Simonsig a race in the Arkle after the former had bolted up in the novice chase. But then someone found some more tokens left over from our Winter Warmer package and it was back to the bar.

Having just slagged off Henderson’s approach to the betting exchanges, I am nevertheless staggered at the talent he is currently masterly nurturing in his barn. Apart from the three mentioned above, Bobs Worth and Long Run retain serious Gold Cup hopes; Finians Rainbow and Riverside Theatre can win Grade 1s at intermediate distances and there is evidence of a slew of good novice hurdlers.

So with no official word from the tracks, I’d better start looking at the cards, even though I fear they have a theoretical air about them. The Forty To Follow project continues to wash its face with three good winners this week – Sustainability, Benheir and Melodic Rendezvous (though Up To Something was outclassed yesterday by the massively impressive Puffin Billy). Today, She Ranks Me and Arctic Ben would have good chances at Haydock should the card get that far. Smad Place takes good form from last season into the Long Walk Hurdle, though has never run in conditions more akin to scuba-diving before. And Urbain de Sivola will love this ground in The Ladbroke.

It’s a waiting game today. I still fear the worst.