February 03, 2012
An icy blast is putting paid to the racing right now. A screaming north-easterly, screwing down the mercury into negativity will probably be enough to freeze out most of the racing this weekend too, Fos Llas fleecy frost covers and all. And I don’t think they will be racing in Poland or the Ukraine any time soon. -30°C and counting earlier today, with the wind chill slicing off another 15-20 degrees.

Maybe abandonment might save me from further humiliation at the hands of the bookies. I notched up an impressive ten losers on the bounce last weekend. It was grim. But I’m not sure I’m in the mood for self-flagellation. My brain, crowded with pre-festival conundrums, scarcely has the capacity to pick over the grisly details. Suffice to say the losing sequence kicked off with a crippling 12-1 disqualified winner at 1.55 on Saturday and was only ended by frosted-off Sedgefield which, no doubt, saved Swinging Sultan’s blushes, at 4.15 on Sunday.

I’d prefer instead to dwell on some infinitely more pleasurable events from last weekend. Our good friends Clare & Neil’s hosted an excellent Burns Supper last Saturday night. The anniversary of Robert Burns’ birth was actually  25th January, but as Clare said, why have a party on a Wednesday?

I’d never been to a Burns Night before. There seemed to be an element of formality and performance about the event. Clare had sent through a piece for Mrs A to read at the dinner and we were advised to wear something tartan. On the basis that my Bay City Roller-trimmed jollies wouldn’t count, I thought I’d check out a clan tie. It’s interesting that the heraldic websites pride themselves in linking just about any surname to a Scottish clan. I smell a genealogical rat homing in on the lucrative American heritage market. And debutant Burns night attendees, possibly. Atkinson is a corruption of Aitken or Aicheson, an old north-country name, and is entwined in some convoluted historical twist with the ancient Gordon clan. So I borrowed a tie from my mate Gordon who is a member of the Cunningham clan. That seemed like an authentic solution to me!

Anyone ear-wigging the conversation during our drive up to Clare & Neil’s roomy Warwickshire farmhouse would have struggled to follow the thread.
“’Some canna eat meat’, no that’s not right.”
“Eh? Meat?”
“But we hae meat…”
Mrs A was learning by heart the Selkirk Grace. She almost had it off pat.

There were 12 supper guests in all, at least two of whom were genuine Scots. Neil was sporting his Murray tartan kilt and David his MacDonald clan colours. Neil is a finance man and has slipped easily into the high-flying corporate world as if born to it. I suspect he was. He’s probably secretly from Guildford or Billericay, and likely to make a guest appearance on TOWIE anytime soon. 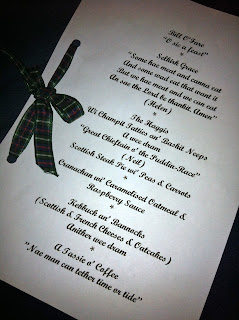 Clare, our hostess, is from a town just down the road from mine in Yorkshire (which is sort of how Mrs A and I know her and, indeed, each other….but that’s another story). Two of the other guests, Peter and Gloria were from near there too. So it was comforting to know that the good folk from God’s Own County outnumbered the Jocks at their own bash. Tsk. How predictably I’ve slipped in to negative regionalism. You’d think there was a vote on independence just around the corner….

Slowly, the mysterious traditions of the Burns celebration revealed themselves to me. The CD (I was only half expecting the massed pipes and drums of the Black Watch) cranked out Flower of Scotland as Clare brought in the haggis on a large platter held aloft. We stood and clapped it in. Neil was poised menacingly over the wee beastie and recited the Address To A Haggis with appropriate drama (An' cut you up wi' ready slicht,) and respect (The trembling earth resounds his tread). Then it was whipped away again by Clare and her teenage table staff to be sliced up and re-presented, accompanied by traditional neeps and tatties and introduced by Mrs A’s faultless Selkirk Grace. Bloody fine it was too.

I was expecting a couple of fine malts to make an entrance at some stage. Maybe after the main course or even later, after retiring to the lounge. But no, several bottles were already scattered across the dining table, having been cracked open to wash down the haggis. Well, it was rude not to join in at that point. The Cardhu was first rate and I think I sampled a fine Dalwhinnie before I let slip to Neil that I had a preference for the peaty malts of Islay and Skye. 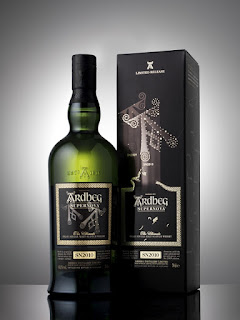 At this point he wheeled out a bottle of Ardbeg Supernova that he described as “almost undrinkable”. My curiosity was aroused. The blurb sounded good. Malt of the year in 2010; peated to more than 100 parts per million (no, I don’t know either..); 60.1% ABV; £81 a bottle. The aroma was over-powering before I got a single drop near my gob. The overall effect was how I imagined having a mouth filled with distilled heather, from the pollen heavy blooms to the earth-crusted roots, would be. There was too much intense, cloying flowery, muddy fire going on. Neil was right. But the website shines a different light. Check this garbage out:

“Ardbeg Supernova challenges the palate with a smoke and salt explosion - hot, sizzling and gristy sensations effervesce and explode on the tongue with a powerful peaty punch. Black and white crushed pepper pop with chilli and chocolate. Chewy sweet rolling tobacco, linseed oil and newly tanned leather roll backwards on a wave of brininess and burst of juicy lime marmalade. Cigar smoke builds up to a crescendo before drying out to bring dark roast earthy coffee, toasted almonds and liquorice root.”

Mrs A said she could still smell the stuff on me the next evening….

The celebration carried on with a series of readings and recitals. Clare provided an entertaining Immortal Memory, plucking some juicy nuggets from the life of Rabbie and provoking heated discussion about exactly how many sets of twins he fathered, how many were born out of wedlock and to whom. The whisky was taking its toll. By the time of the Toast to the Lassies and the Reply, the heckling had reached fever pitch and I genuinely had no idea what was going on anymore. The formal procedure of the evening had unravelled. It was every lad and lassie for himself. I do remember tucking in to Clare’s absolutely stonking steak and sausage pie with gusto and then after a wonderful dessert, delivering a short reading of Mr Burns’ finest. Not a word of which I understood. Though I did a fair impression of pretending to when challenged about its meaning from the other side of the table. Something to do with pride and nationality. Probably.

The evening cracked on with high humour and hearty conversation. Clare did herself proud. Wonderful entertainment. It finished with me challenging anyone left standing to games of tennis on the X Box Kinect. My backhand is something to behold at 2.45am. I was just reaching my peak when suddenly the room was empty. This happens to me a lot.

Our chance to lay-in on Sunday morning was snaffled with alacrity. Leaving the girls with Granny was our best decision of the weekend. Clare was back in the kitchen rustling up a hearty breakfast, but things were a bit more leisurely than the previous evening.

It was good to talk to Peter about his interest in horse racing. He’s bought a decent brood mare once owned by John Ferguson, bloodstock adviser to Sheik Mohammad and is looking forward to putting a two-year-old in training with David O’Meara later this year. Peter’s links with racing don’t end there. For many years he has held a pilot’s license and has built a useful business flying the top northern jockeys around to meetings in their packed schedule. He didn’t have a bad word for current Champ Paul Hanagan and previous Champ, now jockey’s rep, Kevin Darley. He also had some interesting stories to relate professional betting syndicates playing the delay between real time events at track-side and the reactions on exchange markets, for photo-finishes and the like. A high-octane way to earn a living based entirely on the judgement of the bloke on the line with a mobile in hand.

But soon it was time to head back home and grab an early night. Burns has been well remembered this weekend. Unlike the losing nags at Cheltenham and Leopardstown.