Duel on the Downs

August 04, 2011
The Duel on the Downs, splashed the Racing Post front page in 4-inch Times New Roman.  The eagerly awaited clash between Frankel and Canford Cliffs got the full “so it comes to this…” fight them on the beaches treatment. Bacchy was a bit sniffy. “Guff”, he said, pointing at Brough Scott’s flowery prose. “There’s no penetrative journalism in this rag any more.” He’s probably right. All the same, I do love a bit of overblown drama and sentiment, building up the big day with hyperbole and superlative. Alastair Down is the master. His piece the following day was anticipated with the slogan Down on the Duel. Ho ho!

Bacchy, Brynaldo, Ben and I were on a train crawling through ripening wheat fields, edging towards the 2nd day of Glorious Goodwood. The Sussex Stakes was indeed the jewel on the card. But the supporting races were taxing me more. I had been charged with placing two life-changing bets with the remnants of the kitty from Mrs A’s Berko Mums drinking gang. Sounds a bit seedy when I put it that way…
Not that I hadn’t had some useful advice from some of the Mums. Only most of it came after I’d circulated the selections. Wisdom such as  “I always back number 4 in the Grand National. It hasn’t worked yet”, “Would have been good to have something with ‘red’ in the name”, and “I have a problem with the colours” was all valuable in its own way.
So the plan was for two carefully honed assaults in a couple of handicaps which seemed to present the best chances of unearthing Sunseeker-buying, pamper-purchasing, national-debt-clearing winners. The Goodwood Stakes featured a big field of 19 runners over a marathon trip of 2 miles and 5 furlongs. This race has traditionally been cleaned up by hurdlers. Two of them were ante-post favourites here, Spirit Of Adjisa and Liberate. So I shunned them both for Bowdlers Magic, a longer priced stayer from the Mark Johnston yard. Later on, we had course specialist Four Nations in the very hot UBS Stakes, a race smoking with improvers and unknown quantities.
But first we had to get to the track. The train was late and the shuttle bus was jammed in a queue snaking 6 miles back from Trundle Hill. It felt like the Duel on the Downs had put an extra 5000 extra punters on the gates and on the roads. Good for racing. Bad for us if we didn’t get in for the first race.
We made it with few minutes to spare. Even Ben got in, somehow passing the stewards’ smart-casual test despite his distressed jeans and 80’s Harrington jacket combo, with, for God's Sake, a vest peeping out from under his shirt. A subversive in our midst.

Just enough time to grab placepot vouchers, make the losing selections and queue up at rammed Tote booths to strike the futile bets that would crash in the first. Perfect. 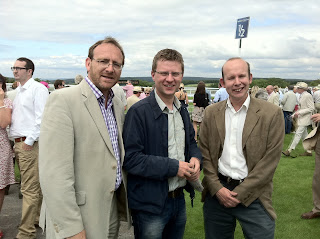 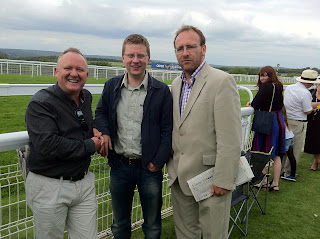 Goodwood looked splendid, packed to the rafters with scrubbed up punters (Ben excepted) set in a widescreen landscape of sweeping, sun dappled South Downs (is this enough guff, Bacchy?) The track’s marketing line is “The World’s most beautiful racecourse”. A lofty claim. Surely the delightful ICI factory vista from the track at Redcar runs it close? Or the concrete A1 flyovers filling the near-horizon at Catterick? On balance, the Goodwood Estate possibly shades it. 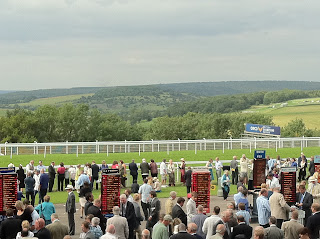 We all drew a blank in the first, including the Berko ladies, I’m sad to say. I got one thing right. The race was won by a hurdler, but I didn’t expect it to be Micky Hammond’s Hollins at 20-1. Nothing in the formbook pointed to this.  Their (my) luck didn’t change in the next handicap either. Four Nations was prominent enough and came out of the pack down the hill, but without forcing his big frame into serious contention. I won’t be able to show my face in The Lamb after 8pm on the 2nd Tuesday of every other month, not including school holidays, ever again…..
The Berko bets bookended the best two races on the card. First, Bryn landed the odds in the Veuve Clicquot Vintage Stakes with Chandlery, whom I thought asserting pretty strongly from 2 furlongs out. Then we witnessed the duel that, in truth, became a tour de force. Frankel was masterly in the Sussex Stakes. Queally managed to hold himself together enough to give the horse the ride he deserved. The RP will say Frankel ‘made all’. That doesn’t do justice the pace and power of this consummate victory. The phrase “the term great is overused” is overused. Frankel is great. Worth the admission price alone. Especially as we’d bagged a two-for-one deal, hey hey!

The beers began to flow steadily after that. This fact assuredly contributed to at least one winner getting away. Bacchy was munching on a chicken tikka pizza, nursing a beer and watching his unbacked fancy Rakasa cruise to a comfortable win. He’d forgotten to get his wedge down, distracted by our unearthing, or so we thought, of a proper old plot. We were convinced Dandy Nicholl’s Scrooby Doo had been laid out for this one. Right idea, right trainer even. But wrong race. Dandy was cooking one up for sure, but it was in the last instead, where Aksaud bolted up. Mug’s game is this.
Potless again. Long faces.
One thing we thought we got right was to chill over a last pint in the boozer by the staion. That way the crowds heading back to town would disperse on earlier trains. Wrong. By the time we moseyed on to the up-platform, our train was already showing half an hour late. When it arrived, all those years of practice on the Cheltenham specials served us well as we ruthlessly bagged four seats at the expense of the sick, the frail and the jammy bastards who’d cleaned up in the handicaps. Joy was short-lived. One stop up the track and we had another 20 minute delay waiting for a driver. A driver! What happened to one that got us this far?
There’s always someone to jolly the troops along in situations like this. Here, it was an opinionated walking tour leader with an inescapable searing voice, penetrating through other conversations like a hammer drill. “Southern Railways have no strategic approach when it comes to delays”, “They can’t simply terminate this service at East Croydon! That’s just not an acceptable solution to the situation that they have created! We should rebel!”, “I’m meant to be at a concert tonight and then get back to Brighton!” It went on. He was nominally talking to a couple of his tour charges. They had rabbit-trapped-in- the-headlights eyes and, first chance they got, they bolted for a couple of seats at the back, turfing out another couple in the process.
It was, though, a painful, protracted journey home which took a little of the gloss from a top day out. Bryn and I kept our spirits up in the usual way – by debating which would be the best junk food option between the station and home. There’s always solace in chicken curry and special fried rice. I’m sure the Berko Ladies feel the same way.

Ben C said…
Just to be clear: that isn't any old vest. According to M & S this is a 'superior' garment, providing a 'fashionable look and a flattering fit'. Mock such a garment at your peril.
Friday, 12 August, 2011