Friday’s Oaks threw the spotlight onto Johnny Murtagh for an exquisite ride of perfectly judged pace from the front in a slowly run race. Johnny, gifted an uncontested lead, cranked up the gas on Dancing Rain round Tattenham Corner and hit top gear by the two furlong pole. She found more for him close home too, making the rest of the field look like mugs. Top jocks in Johnny’s wake woke up too late and began flapping like herring gulls behind a hydrofoil, sending out increasingly desperate distress signals as their hold up tactics sank in the backwash. My tip, Havant, was among them. Bumped too and reportedly not liking the firmish ground, she’s got something to prove now.
The Derby was an even better spectacle. The story about Carlton House’s participation was shunted aside for one about an injunction received by Keiron Fallon preventing him from taking the mount on Recital because of a previous agreement to ride Native Khan. A High Court session that very morning had confirmed that Fallon had indeed broken a contract with Khan’s owner, Ibrahim Araci. Yet more controversial material for the Fallon canon: a gifted jockey who flies too high (in many senses…) too often and has received another wing clipping. File under F in the well-stuffed drawer for Flawed Geniuses.
The race was all about timing, just as the Oaks was. But this time acceleration won the day. Twelve-year-old jockey (approx) Mikael Barcelona flicked on Pour Moi’s afterburners with a furlong to go and blitzed passed Carlton House and then Treasure Beach (whose owner was convinced he was winning it). Barcelona’s out-of-saddle, wide-mouthed, stick-punching celebration before he’d even crossed the line caused a ripple of tutting amongst commentators (why is Carson still employed by the beeb? Great jockey but inarticulate, inaccurate and irrelevant punditry). However, to me it looked like uncontainable ecstasy and disbelief overtook him. Nice one son.
So the winners of Epsom’s brace of classics both eluded me. Across both days I did just enough to scrape a meagre profit. A St Nicholas Abbey/Hooray win double was the only return of note, and combined with some skinny place returns on Clinical in the opener and St Moritz in the Diomed on Saturday, I kept my head above water. The biggest disappointments had to be Falasteen and Masamah in the Dash who both missed the break. Their race was over in the first five seconds. Boo.
That same day I tipped up a 9-1 winner for my mate Stuart who was going Kilbeggan races on Sunday. Later on I was boasting of this to Mrs A. “Did you back it then?” she inquired. “Er, no. Actually I didn’t”, I confessed. “Hmm. You tipped the winner of the Grand National to Keith without backing it as well. Not getting this right are you?” Fair cop.
The weekend’s back-to-back classics up on Epsom Downs were punctuated by our own participation in classics of a different nature. Friday night was Great British Proms night at Spirit of Tring 2011.
The English National Orchestra had been whistled up from their usual high-brow haunts round the Royal Albert Hall and The Barbican to lay down some classical grooves at the Grassroots Stadium, home of Tring Athletic FC. We joined our good friends Julie and Callum with picnic blankets, smoked salmon rolls and posh cheese for a perfect, late Spring evening concert in the company of a thousand
others. 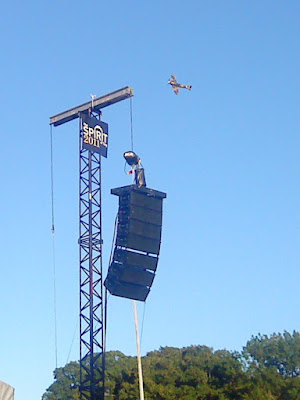 For me, the climax arrived rather early in the gig when the orchestra swelled through a trio of tub-thumping WWII memorials, comprising ‘633 squadron’, ‘The Spitfire Prelude’ and ‘Dambusters Theme’. But the thrill was less the music than the emergence of a Spitfire Mark Vb splitting the clump of trees away to the left before looping and barrel-rolling through the cobalt blue heavens, choreographed perfectly with the pitch and pace of the ENO. This iconic image brought a lump to my throat. I may not remember these magnificent machines and their young pilots slugging it out with Me109s in these skies 70 years ago, but the significance of that throaty engine tone and distinctive silhouette swept over all of us. Mine were not the only glistening eyes amongst the crowd.
The girls’ highlight was easier to explain. Tenor, Wynne Evans captured their imagination. Not because of his searing rendition of Nimrod or top-notch O Sole Mio, but because he’s the bloke who sings ‘Go Compare’ off those awful telly adverts. “Just met the Go Compare guy’” texted daughter no 1. “Cool” came the many replies.
To be fair he was a scream. In between the inevitable “Over there….go compare” gags, Wynne trotted out a very funny stand up routine aimed at ridiculing the musicians. “What’s the difference between a violin and a viola? Eh? Well, a viola burns for longer. Ha!” I liked that one. “Do you know what happens if you don’t practise your violin enough?” his bass Welsh voice boomed, “They give you sticks and make you play the drums at the back. Wave your drumsticks Gerald!” By now, he was in full rib-tickling stride. “And then if you’re really, really bad, they take one away, paint it white and make you stand here at the front.” Riotous applause. Conductor, Joe Alexander feigned outrage.
The conductor was the star of the show, though. He had a refreshing rapport with the punters and offered witty banter with Wynne and the other guest, soprano Sarah Ryan. He was so chock full of camp humour and corny one-liners that his Union Flag waiscoat was popping sequins all over the podium.  As the programme notes made clear, “Joe has a rare ability to form a bridge between the orchestra and audience. He is an entertainer”. True enough. He loved himself. “Any VIPs out there?” Sporadic cheering. “I’m one. A Very Important Puff!” This had Daughter No 1 reeling. “Hahaha! I can’t believe he said that!” “What’s a poof”, inquired Daughter No 2.
The music delivered as well. A crescendo of crowd pleasers - the 1812 Overture (excerpts), Nessun Dorma, Rule Britannia and Jerusalem - built to a full flag-fest, celebratory Land of Hope Glory. A fitting and enjoyable climax. Cue big firework display and then home time. I don’t know what these talented bunch of serious musos really make of cheesy, informal, outdoor classics for the masses. But in my book this is how you sow the seeds for a sustainable and widespread love of classical music amongst a new audience. And if that audience moves on to appreciate po-faced, thin-lipped Mozart quartets in narrow seats and silent halls then so much the better. But I don’t think I’ll be with them!