April 01, 2011
Bryn has asked for a review the doner kebab I scoffed last Friday night. Understandable. Brynaldo’s been a connoisseur of decent doners as long as I have. He introduced me to the inspirational kebab roll (not a gymnastic move, rather a revolutionary way of serving everyone's favourite take-away classic rolled up in a tasty flatbread) in Windsor many years ago and has joined me in tirades against Nick’s insistence upon eating a doner with a knife and fork accompanied by…. mayonnaise. I despair.

In a seismic shift from accepted practice, we consumed our kebab before - rather than after - the Stiff Little Fingers gig, and ergo, before a skinful of beer. Was this wise? Would the full flavour of chilli sauce and raw onions be too much for a system lacking the usual sense-dulling alcoholic insulation?

To be honest, Bryn, the whole thing was a bit of an anti-climax. You know how we have become clone town Britain these days? Uniform high streets pandering to a population playing safe with comfortable chains and recognisable brands….everything tending to the average. Well the same trend is afflicting doners. Gone are the days of locally prepared and cured spikes of lamb, unique sauces and condiments and accessible presentation in carefully folded plain paper wrapping. Your bog standard kebab house now purveys mass produced and lorry delivered drums of stacks of meat slopped with standard garlic/chilli sauce all served up in a ubiquitous polystyrene box. I yearn for the good old days. So this kebab was perfectly acceptable, mate. The meat was tolerably moist, the salad was acceptably fresh, the sauce was sufficiently piquant and the sweet chillis retained a soupcon of crunch. But that’s about as far as it goes.

But I think Bryn was really looking for a review of the Stiff Little Fingers gig. The kebab house was next to the Forum in Kentish Town. I was with Mayonnaise Nick and his son, Doug, plus Nick’s mate Graham and his son Sean. Doug and Sean are 15 or so, but have already got a commendable number of gigs under their belts. Something I’d have died for in rural Yorkshire at their age.

We caught the support act, Neck. A bunch of Pogues wannabees who came across more like a tribute act than the real thing. Mind you, they were plagued by an atrocious sound. Only once did they get the electric guitar, fiddle, tin whistle and banjo to sound remotely like they were dishing out the same tune. But they were very enthusiastic and clearly enjoyed their (overly) generous 50 minute slot.

The place filled up nicely for SLF and we even spotted a few punters up in the usually deserted balcony. And it was a good gig. I’ve seen SLF a couple or three times now and they ply an honest, no frills trade, hammering out a string of punk classics interspersed with some, to be honest, ropey material from later collections. Jake Burns still bestrides the stage in a proprietorial manner and has plenty to say. But the fire burns with a little less incandescence. “I got the shirt from Willy Nelson. Just before any of you smart arses asks!”, says Jake of his white piping and metal-tip collared spanker.

‘Tin Soldiers’, ‘Barbed Wire Love’, ‘Wasted Life’, ‘Fly the Flag’. One by one, shards of pithy Ulster punk tore up the night. It’s a shame though that standard pop fare like ‘Listen ‘and ‘Guitar & Drum’ remain in the set.  New one ‘Full Steam Backwards’ didn’t stir up too much primeval angst either. But these are minor quibbles. ‘Suspect Device’ was a raucous set closer.

At this point Doug says to his Dad, “I wanna go down the front.” Nick hesitates for a moment and then goes, “OK, come on then!”. Well, I’m not letting them have all the fun. So I follow them down. Sean and his Dad hung back on the terrace and I can feel Sean, 15, thinking ‘who are these sad git old men pretending they’re 18 down the front…’ I lose Nick and Doug in the melee somewhere. Although it’s a bit tame to start off with. ‘Johnny Was’ is a nice little reggae derivative, but for me doesn’t work as an encore. But for the next one, all hell broke loose. A full throttle and mashed up ‘I Fought the Law and the Law Won’, bled into the SLF standard bearer ‘Alternative Ulster’. There is no following that.

I thought I’d escaped the mosh unscathed ‘til I spotted a mysterious bruise on my arm a few days later. It’s still there.

Maybe the beer anaesthetised the impact a little. Graham’s a big bloke and puts plenty away. Nick’s no slouch either. I think I was trying to keep up (cider made an appearance at one point). Mrs A and the Mother in Law were still up when I staggered in. I imagine there was some hearty chat and I was obviously given clear instructions on sleeping arrangements because I woke up in daughter No 1’s double bed. “Daddy, you snore!” she said and dug me in the ribs. A-ha, she was in there as well.

Later, we made the pleasant trip over to Wallingford to visit our good friends and former neighbours, Fay, Adrian and the boys. The plan was to launch a carefully crafted assault on the World Pooh Sticks Championship at Little Wittenham the next day. High octane Rock ‘n’ Roll and global sporting endeavour crammed into the same weekend. The possibilities are boundless with a little imagination!

Our generous hosts had done a top job on the organisation. Not content with wonderful hospitality (including the small matter of a stunning chilli con carne), competition entries had been made in advance and instructions received: the children formed one finely honed unit, The Berko Bouncers, and the adults another, slightly less honed, The Mugpunters (of course!).

The Oxfordshire World Pooh Sticks Championship has been held on this idyllic sweep of the River Thames since 1983 and this years’ event drew over 500 entries from far-flung corners like New Zealand, Germany, the Netherlands (according to BBC Oxford) and Hertfordshire.

Adrian sagely reported his friend’s observation that the Environment Agency had a facility just up stream and would have been calculating optimum flow channels into the early hours. What chance do we mug punters have?

Despite best laid plans, we almost blew our appointed slot on the bridge. In using up vital nervous energy by eating cake and milling about in two separate waiting areas, both at the wrong time, we contrived to miss our cue. It was with some relief that a smiley Rotarian spotted us on the hill and said, “What are your team names?” I was quite flattered that he could identify that we were competitors. Something to do with our swagger and steely determination, I mused. “I think it was the pink entry forms we were clutching”, pointed out Fay. 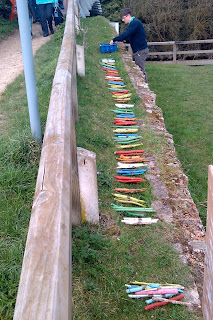 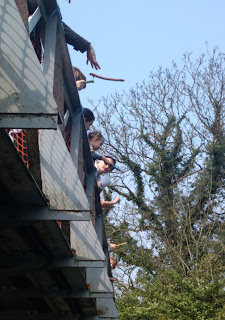 I must confess that the actual dropping of the sticks business was a tad confusing. It became clear that we had missed a crucial piece of briefing in our random milling-ness earlier. But it didn’t take the children long to work out the process. We quickly fell into line: moving across the bridge for each of the four drops, thereby cancelling out any optimum flow advantage. They’ve thought this through!

Uptake wasn’t the only thing the children were cuter at than the adults. The Berko Bouncers immediately surged to the upper echelons of the leader board after their well-timed drops. Mugpunters nowhere. Zippo. Doodleysquat. In the end the bouncers finished a more than respectable 5th.  That’s 5th Best Pooh Sticks Team In The World 2011. 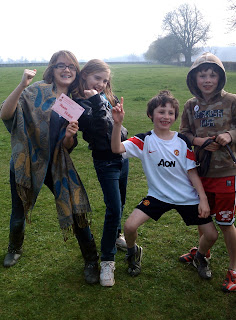 So a celebratory late lunch was in order back in Wallingford and then time for goodbyes. Until the cowpat wanging international in Aldbury, that is…..