I’m looking for a boost. The punting action has been pretty miserable since the last update. I got Cheltenham and Newmarket all wrong on Saturday. Indeed my only result was tipped up by Bacchy commenting on the ‘seasoning’ post here. “By the way, La Vecchia Scuola for the Cesarewitch”, he said. “Thank me later”. The horse came late with a screaming finish. A rattle and hum on the outside of the pack. It was close. But he couldn’t go by long time leader, Aaim To Prosper. Agonising. Half a length in it. But at 40/1, the outcome was some (frankly, welcome) place wedge and a nod of deep respect to Bacchy for a glorious shout. How much more glorious might it have been, though? Don’t go there.

Lots to interest us over the jumps today. Cracking card at Aintree. The venerable Monet’s Garden, a distinguished 12 year old, plies his trade in the Old Roan Chase. An event he has made his own. He loves this track: Ruby Walsh once said that he gets lost outside Liverpool. And he’s always gone very well first time out. I just feel his age will catch up with him this season. But if the flying grey blazes from the front, pinging every fence like a 6-year-old, I won’t begrudge him a moment of the rapturous ovation he will certainly receive. This race has exacta! written all over it: Poquelin to deliver some of the hype that surrounds him, chased home by Albertas Run who won’t like the ground much and has to defy top weight, but should be too good even for Tartak’s feather-weight (jumping problems) and the rest.
Other Aintree highlights include a mate of mine, Medermit tackling fences for the first time in what should be a penalty kick; and some good ole boys like Cornish Sett, Royal Rosa and Character Building featuring in one of these increasingly popular veterans chases. At the other end of the experience spectrum, tomorrow’s Aintree card sees the debut of Cue Card over timber. This exciting prospect from the unsung (indeed, gently mocked in some quarters) Colin Tizzard stable bolted to glory in the Champion Bumper at the festival by a country mile. 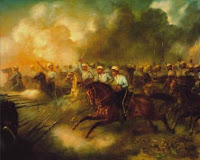 Over at Chepstow, early season pointers for the staying novice hurdlers are usually unearthed in the Persian War at 3.35. Captain Chris will be short but I’ve got for Lidar at a big price whom I followed last year and seemed to be crying out for a trip. Later, I’ve got two of my 40 to follow beasts taking each other on in the Silver Trophy handicap hurdle. I hate it when that happens. Restless Harry and Luska Lad will both be close to the head of the market, so I’m slamming into some heady exacta perms again. 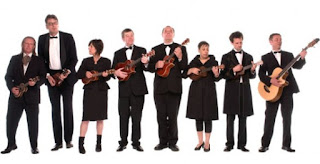 Later still, Mrs A and I will be sampling the delights of the Ukelele Orchestra of Great Britain in concert at the Ipswich Regent in a gig put on by her company. Now, some have begun to question my rock n roll credentials after Tasmin Little recently and now this. In the pub earlier this week, Pete was a little taken aback by my current gig list. “Ukeleles? That George Formby territory, mate. What’s going on?” I mentioned a little timidly their haunting rendition of Nirvana’s Smells Like Teen Spirit

But that didn’t seem to regain my lost ground. Later, when he saw me in the packed bogs, he blurted out “Hey Dave, Bryn tells me you like that Duffy bird. Is that true?” I sensed a little fidgeting and sideways glancing from my companions at the trough. I had nowhere to hide. Full UOoGB review to follow, natch.
Anyway, next week I’m off to see the Manic Street Preachers. That might recover some of my lost respect. Mind you, we’re upstairs at the Brixton Academy. Seats! It will be nice to have a bit of a sit down. Bryn’s bringing the flask of tea and blankets.