January 11, 2008
I want to use this blogspace to record my trials and tribulations being a small time mug punter: having a bit of a laugh following the horses, sometimes winning, usually losing, but always making the most of it. For my first blog entry I'm going 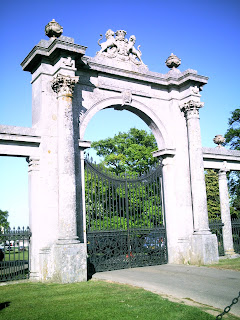 back to last April to record a top day out at Towcester races......


......Today I am going to Towcester Races. The day has broken blue, clear and gorgeous: a clean Spring day with hot Summer temperatures in a climate changing world. I do a spot of gardening before making for the track. Potting on the poppies sowing the sunflower seeds before reaping a harvest at the races. Well, that's the plan.

I go by public transport to Towcester, but the bus connection at Northampton lets me down so I end up flagging a taxi. Cabbies are always worth a laugh. This one is no exception. “Gambling, eh?”, he says. “Gambling. I went in that casino last month.” He nods over the road. “ 'Do you wants some chips?' says this girl in a short skirt. 'No thanks', I say. I've already eaten! Harrharrharrggghhh!” Everyone's a winner. It turns out that he's studying for a psychology degree and he wants to work with autistic children. Never judge a book, as they say. 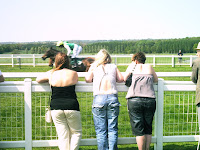 Racecourse has been running a fantastic free entry policy for the last couple of years and it has paid off handsomely by increasing the attendance threefold in that time. Today is no exception and there is a good crowd here in time for the first race. The gaggle of girls by the running rail in skimpy outfits and high spirits could be mistaken for a hen party if it wasn't a Monday afternoon in the middle of Northamptonshire.

The racing is admitedly poor, however. In the first race a rank outsider called Chain wins in what the race announcer describes as 'dramatic fashion'. That's dramatic as in Laurel and Hardy to my eyes. First the leader blunders the 4th last, leaving his pursuer clear in the lead until, with two fences left to jump, he ejects his jockey via the side door. The new leader is the favourite Carthy's Cross who is miles clear coming up the hill for home. But he begins to lose interest all by himself and, despite the frantic urgings of his jokey, he virtually stops. The hitherto tailed-off Chain suddenlt scents an impromtu victory. He closes down Carthy's Ctross and snatches the race with 200 yards to run, accompanied by cries of anguish from the legion of punters who have backed Carthy's Cross.

This sets the tone for me really. Not only do I fail to find a winner in any of the six races, but I also manage to squeeze vinegar all over my burger. An easy mistake. Who would expect a brown squeezy bottle to contain anything but brown sauce? Even a pint of John Smith's Snmoothflow, purchased from the well-appointed, newly constructed grandstand bar can't swill the taste of acetic acid from my mouth.But the weather is fine, the crowd in hearty voice and the racing entertaining. This is better than working!

So I head for home after the final race and pick up the number 502 to Northampton station a little poorer in pocket but much the richer in spirit.